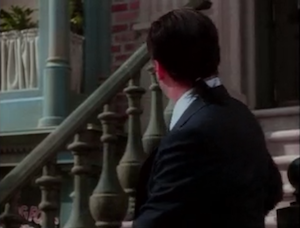 My Little Ponytail: Henchmen Are Magic.Well, the story might make negative amounts of sense, but if you've managed to hold on for this long, you'll be glad to know that the director made up for that by making all of the characters as irritating as humanly possible.

Like Catherine, the world's greatest con artist, whose favorite scam is to annoy the fuck out of people until they give her everything she wants to make her shut the hell up. Seriously, that happens in the movie, as an actual con that she pulls. For the sole purpose of proving to us, the audience, what a great con artist she is. She's a modern 90s woman, a free spirit unfettered by society or morality or basic human decency or clothes that aren't the exhumed robes of Nostradamus somebody shrunk in the dryer. Come to think of it her whole wardrobe is pretty much the concentrated worst hits of the 80s (minus parachute pants).

In addition to olives and baklava, one thing Shoot is chock-full-o' is shadowy characters, and we mean that very, very literally. The shadowy part, anyway. You can't go five minutes without seeing someone lurking, creeping, skulking, or emerging from the shadows/ behind a hidden doorway. Shadowiest of them all is Christian Fail, a.k.a. "King", the mysterious smirking mogul (that's a mogul of smirking, not a mogul who happens to be smirking) who seems to have amassed his sultanic fortune doing product placement for grappa brands and betting people in bars that he could make this face he was in fact just about to make but they didn't think he could. Fans of the cinema (specifically, the terrible kind) will recognize King as none other than Miles O'Keeffe, better known as grade-F Conan the Barbarian clone Ator the Fighting Eagle. 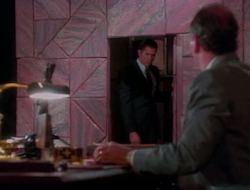 Oh, so that's the closet people are always talking about coming out of! When he's off the clock, Christian Tarzan O'Keeffe enjoys picnicking, dramatically emerging from things, angstily reminiscing about his childhood, and trying to pawn off "the emperor's 'pearl'" (read: world's largest booger) to tin-pot dictators in one of his many luxurious secret evil rumpus rooms. He also enjoys hangin' with his bodgyuard and corporate VP in charge of totally hetero best bro synergy, Michael "Ole' Ironside" Ironside('s lookalike), capably played by some guy nobody's ever heard of because he's not Mr. Cooper so who cares. Mr. Ironside works on lots of important things and ideas and stuff out of his swanky corporate office, the Truckstop Champagne Fantasy Suite, the first room ever decorated using the "Egyptian hyper-gay" swatch sample at the hardware store.

But we digress. There is an ending to the madness, of some sort, but it involves eight dozen characters - many of whom we've never seen before - all double-, triple-, and quadruple-crossing each other over and over until nobody has even the slightest inkling of what the fuck is going on anymore, least of all the viewer(s). What matters is that when the dust settles, we've managed to find a movie with a less coherent and sane look into the world of con artists than Deadfall, and that's pretty goddamn impressive, in a way. But that's the only positive thing you'll hear us say about Shoot. The only thing that could make this movie a more catastrophic failure would be finding out that it was actually intended as a comedy. Oh wait, it looks like the subtitle/alternate tagline was in fact "a dangerous comedy". We rest our case.