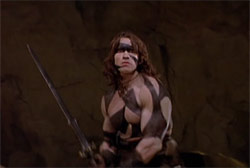 Conan blends into his surroundings using elite commando techniques. In the movie Conan the Barbarian, Conan goes on a quest to find Thulsa Doom (James Earl Jones) because Thulsa Doom destroyed Conan's village and killed both of Conan's parents when he was a boy. Then when Conan finally finds Thulsa Doom, the dude nails Conan to the Tree of Woe and leaves him to die. Conan is stuck on this tree for a long time and he's almost dead and this vulture comes and starts eating Conan and Conan just wakes the heck up and bites the crap out of the vulture. That's so Conan.

Then Conan's friends rescue him and they go looking for Thulsa Doom again and Conan finds out that Thulsa Doom's cult is a big ploy to get people to have sex and then get eaten and that Thulsa Doom can turn into a snake. On top of all that, Thulsa Doom kills Conan's woman, so he has like 50 to 60 reasons to get revenge against Thulsa Doom.

So Conan has Thulsa Doom's daughter and she is super fine and he chains her up to a rock and Thulsa Doom sends an entire army to go get her back. And guess what? Conan kills all of them. He has some help from Subotai, his buddy, and a wizard who is sort of like Yoda, but it's 85 to 90 percent Conan. But Conan doesn't stop there, because Thulsa Doom is still alive, so he convinces Thulsa Doom's daughter to show him the back way into Thulsa Doom's evil hippie temple and in front of like a bazillion cultists Conan resists Thulsa Doom's hypnotism and chops his head off. He even throws it down the steps at the cultists!

So in 1980 or 1981 or whatever, say the Kurds are Conan's friends and Saddam rides in there on a bunch of horses and just gasses the crap out of Kurdia. Conan is just a little boy and he sees Saddam and his two evil sons and he is enraged, but Conan has to spend two decades having the imperfections beaten out of his steel spirit in Iraq. He fights in pit fights against, I don't know, Iran or whatever, and then come 2003 he finds out that Saddam is eating people. Dude, I know, crazy, but it's not that far off. I remember something about rape rooms and Saddam having a bible written in his own blood. 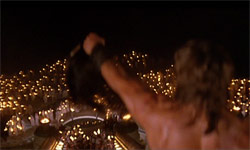 Conan shows off his latest trophy to Thulsa Doom's former cultists. America gets fed up with all of that and - oh yeah, Conan's girlfriend worked at the World Trade Center so he's still mad about that too - and America led by Donald Rumsfeld's army just kicks Iraq's butthole inside out. No problem, right? But then you see what happened because we have like the sweetest missiles and robot airplanes and helicopters, but then some bad guys with a sack full of gunpowder just set it next to an old rusty lawn chair and blow up a truck full of soldiers.

Iraq War Two has turned into house to house close-quarters fighting and sudden ambushes. Sound familiar? And then there are the beheadings. Blam. Who is better at that than Conan? Those bad guys would have their video recorders out and some poor dude all tied up to a rock. They'd bust out their ceremonial snake daggers and start chanting like druids and walking towards the dude who is like going, "no, no!" or maybe he's even hypnotized.

Then, right as they raise their daggers up to start cutting the poor dude's head off, the shadows come alive and Conan (who is all painted to conceal himself like an ancient commando) chops one of them in half. He grabs their big pot full of human soup and dumps it on a bunch of them and then throws a 5,000 pound soup pot through another wall. Then the beheadings really start! Conan is hacking and slashing his way through insurgents and surgents alike. He finds a room full of RPGs and mortars and he just goes "RAAAAAA!" and slams his sword down on the floor and they all explode at once.

These jokers don't have any tanks or laser guided machineguns or anything, they're just dudes with knives and gunpowder running around downtown Iraq. That is the perfect frigging environment for Conan to just waylay the crap out of the whole deal. He can just storm through every building and dungeon, hacking up anyone who has a dagger, and after like ten hours or so every single bad guy is either dead or is now part of Conan's army. When it's all over Conan will just disband the army and go off to some rocky outcropping to contemplate what he has done and how strong he has become.

I guess that my point is, Conan may seem like he is trapped in the past, but he and the film both are as relevant now as they were when they first appeared. I also think that because I am able to entertain doubts about the ability of Conan to lead the Coalition against the Republican Guard, I am properly prepared to review the movie. I have deducted some points from the special effects, because those seem sort of old especially when the demons appear when Conan is being brought back from the land of the dead. I also deducted a couple points from acting because I was kind of disappointed with the way some of the cultists acted at the temple. They just seemed too relaxed and I know they were supposed to be drugged by the cannibal soup that they were going to become soon, but they were still a little too laid back about commando Conan and his buddies attacking.