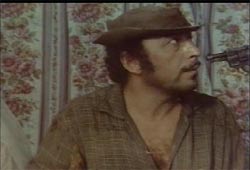 Huh?!?!?!?!Spak calls the incident up to the Turkish Enterprise and Kirk gives him some advice while a female crewmember with way too much makeup stares intently at him. Spak heads off to conduct some sort of random investigation, leaving McCoy in charge of moving a plastic block over the guy's chest and listening to really loud and inappropriate sound effects. The salt-sucking woman and the professor retreat to the lab in the cave where she feeds worms into the radio on the back of the robot. The professor seems upset when he catches her doing it, so I guess worms are bad for the oily manbot's radio backpack. I guess?!?!?!!? The professor and the salt-sucker head over to a large cardboard computer and he pushes buttons. She stares off into space and in an unearthly voice says something.

At this point the movie takes a turn for the madcap. I was expecting things to cut back to Spak or even Kirk on the Turkish Enterprise. Instead it cuts to a crowd of people thronging around a beat up taxicab from which a woman in a wedding dress and a filthy man in a smashed hat emerge. Thus are we introduced to Turist Omer. The best way to describe Turist Omer is that he's a drunkard from a spaghetti-Western, crossed with Ron Jeremy, crossed with the guy in the bee suit from Telemundo. He's comic relief in the form of a surreal sadsack. From what I can gather from this sequence, Turist Omer is being forced to marry someone he doesn't want to marry by a gun-wielding man in a business suit. He prays to the heavens for escape and he is transported into Turkish Star Trek. Given how brief the scene is I have serious doubts that even if I knew Turkish I would have a better idea of what was going on.

Omer is transported to the Greek ruins set where he encounters two women in tiger-striped bikinis with gold skin. They are standing motionless so I'm not sure if they are supposed to be robots, aliens, or just statues. Omer finds them interesting but he is pursued awkwardly and captured by the swaying manbot with the radio on his back. The professor and the salt-sucker meet up with manbot and his Omerlicious prisoner and the professor introduces himself. Salt-sucker just licks Omer's hand until the professor yells at her. The professor sends Omer off to frolic with oily manbot and some of the golden women in the basement while the professor confers with Spak. For reasons unknown Spak calls back up to Turkish Enterprise, where McCoy and Kirk are sitting next to a cardboard computer. Kirk asks the computer a number of questions and each time it replies a blue police siren on top of it starts flashing. Technology!

After the computer is done relating its wisdom the professor introduces Spak to Omer. In what can be generously considered as a fucking horrible move, Spak decides to bring Omer with him when he returns to the Turkish Enterprise. In another brilliant move, Omer is turned loose on the bridge which has been vacated by everyone except for three women in skimpy outfits holding Turkish phasers. He goofs off chasing them around and yelling while they aim their guns at him, then he spots Kirk's chair, which on further inspection looks like one of those arm chairs you can sit and read books in at Borders with two yellow light bulbs glued to the arms. Omer takes a seat, and the women try to get him out of the chair, but he just paws at them like the horny filth-encrusted drunk that he is. 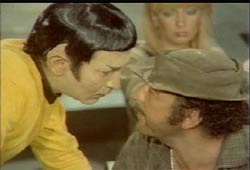 Turist Omer, logic dictates that I press my sweet lips to yours.

Spak and McCoy arrive on the bridge to restore order, but even Spak leaning in to Omer's face like he wants to make out with him fails to calm the smashed-hatted one. He offers to shake Spak's hand, but Kirk's timely arrival on the bridge at last convinces Omer that the chair is better yielded to a waxy faced freak. Spak and McCoy confer with Kirk about the events which took place on their away mission. Meanwhile, Omer takes advantage of their distraction to wander over to a dial glued to the cardboard and turn it, causing the camera to tile abruptly and everyone to freak out. Oh that wacky Omer, what will he think of next?

Back on the planet's surface, the salt-sucker kills the crewmember that everyone forgot to bring back with them. She then assumes his identity and has herself beamed up to the Turkish Enterprise. I would like to take a second to point out that every door on the ship opens and closes like the doors on Star Trek, only the action is accompanied by a painfully obvious "sssssshhhhhk" sound effect being made by a man. You can hear the spit fling out of his mouth every time a door opens.

With a disguised salt-sucker skulking around the interior of the Turkish Enterprise, McCoy decides that it's high time for Omer to have a medical exam. This exam consists of McCoy clipping wires to Omer's nose and hat and then having two women rotate the giant wooden bed he's on. Omer seems to enjoy himself. Spak and Kirk enter with a "ssssshhhkkkk" and learn from McCoy that, I guess, Omer has a clean bill of health and isn't a salt-sucking shape shifter. In fact, he's so totally not sick that they decide to let him on the bridge again so that he can wander around annoying the living shit out of all of the crewmembers with his hijinx.