This two frame animated GIF accurately reproduces almost two minutes of the movie.Back in the movie that doesn't center around Omer being a kook, the salt-sucker (still disguised as the crewman) encounters an attractive woman in the hall and gets into a really long and creepy staring contest with her. After a couple of minutes of cutting back and forth between the two staring at each other the salt-sucker approaches her and begins wiping his hands on her face and then licking them. I guess this means he kills her, because she's not around in later scenes. On the bridge, Omer continues to screw around, shining a flashlight at his stomach and somehow causing the ship to go on red alert. No, I can't explain that one either. Kirk has a good laugh at poor Mister Spak's expense when it is realized that it was a false alarm triggered by that good natured rascal Omer. During the hubbub of the red alert we get a glimpse of the salt-sucker killing another beautiful woman.

Realizing that letting a bumbling half-crazy lecher wander around the bridge perhaps wasn't the best idea, Kirk sends Omer to hang out with one of the hot female crewmembers in the wacky space garden. Omer hits on her as she feeds plants that are gloved hands large red objects. I distinctly remember this exact same scene from an episode of Star Trek, only Omer wasn't around breathing gin down the collar of the female crewmember. The salt-sucker wanders in looking crazy and begins wiping and licking Omer's hand. This causes the human hand plant to start making monkey noises which, in turn, makes the salt-sucker flee. 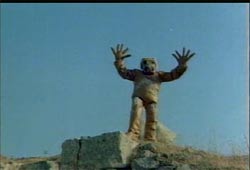 Look out Kirk, it's wiggling!

Out in the hallway the ravenous salt-sucker spots a woman in a red wig and turns himself into a black guy. This time Omer sees the transformation happen. The newly changed salt-sucker begins its gross feeding process on the woman. Omer attempts to stop it, but freaks out and runs to the bridge to warn the crew of the danger. They don't believe him until a scream is heard and everyone rushes the five feet from the bridge to the dead body in the hallway. As McCoy rushes in behind everyone else the salt-sucker hypnotizes him and assumes his form, although it leaves the good Doktor unharmed.

The McCoy salt-sucker, Kirk, Spak, and Omer transport back down to the planet to confront the professor about his involvement in the bad goings on. The confrontation prompts the professor to flee through a secret door in his lab; a door that leads directly to a confrontation with a really stupid looking monster with the most obviously rubber fingers I have ever seen. The monster waves its arms and wobbles its rubber fingers a safe distance away from Kirk, which prompts Kirk to chase it. As the monster is fleeing from Kirk it becomes so upset that it upgrades from waving its arms to waving its arms and shooting a burst of fire out of its chest. The fire isn't even aimed in the same direction as Kirk, so I'm guessing it's some sort of alien digestive problem.

Kirk bravely throws a large from rock like a girl at the creature. The rock hits it in the head, causing its rubber hot dog fingers to wobble and inspiring it to throw a much larger foam rock back at Kirk. Even though the creature's attempt to throw the rock clearly fails less than an inch from its body, the camera cuts to the rock sailing in to strike Kirk. He manages to dodge. Spak arrives just in time to save Kirk from further danger by shooting a really bad special effect at it from his Turkish phaser. It's at this point that Kirk and Spak discover the polka-dot covered body of the crewman the salt-sucker killed to get onto the Turkish Enterprise.