Now is a good time to admit that I am the whitest person in the world, as long as you don't count Reggie Miller. As such, it is my duty to be completely ignorant of rap music. I admit this character flaw, and I am ashamed of it. However, even though my experience with rap is limited to the stuff they play on Pert XXXXTREME Shampoo commercials, I am pretty sure that Ice-T is just not trying anymore. For instance, here is a lyric that is pretty typical of the stuff in "Urban Menace":

After the montage, during which Snoop Dogg pops out of a dark corner to a blaring "WHIING" sound thirty times and stabs thirty people, we are finally told his back story. Apparently the gang in question burned his church and killed his family for trying to turn the neighborhood around. He tells all of this to Basquiat and his wife (who has appeared in the church somewhere along the way), because all of a sudden they are best friends. Nevermind the fact that they were just shooting each other and beating each other's kneecaps in with broom handles just minutes ago, this is art, people! 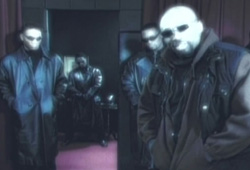 Big Pun and Fat Joe are summarily shot by Snoop Dogg and Basquiat. Snoop Dogg tells our greasy-haired hero to escape while he still can, and then runs off with the corpses. How he managed to drag either one of them without a forklift or at least a winch is beyond me, but hey, he gets it done. The movie fades out and in, reopening on a new room of the church, where both Fat Joe and Big Pun are strung to the wall. Snoop Dogg cuts the heart out of one of the faceless gangstas from earlier and approaches Fat Joe. Suddenly the scene switches to silhouette, and Snoop Dogg's shadow turns into a demon. He shoves the heart down Fat Joe's throat and we fade back to black.

But, per usual, it's not over. Ice-T, who has undoubtedly spent the hour since his last appearance huffing rubber cement out of Fat Joe's sweatstained girdle, appears onscreen for one last line, a clip that really sums up the entire movie:

Yes, Ice-T, that's the perfect fucking analogy you got there. An untalented rapper who's an even worse actor turning into a demon and stuffing a heart down another untalented rapper's throat. That's exactly what comes to mind when I think of the phrase "urban renewal." Hell, if I were writing the SAT analogy exam I'd probably have a question like this:

A. A nice walk in the park
B. Going on a first date with a pretty girl
C. Sleeping in on Sunday and eating ice cream in bed
D. Urban renewal, motherfucker.

In reality all of those answers are wrong but I'm not worried about Albert Pyun taking the SATs anytime soon. But if any of you readers are out there grading SATs and you see this question with the answer "D" marked, you know what you have to do. If you're looking for a heart to stuff down Albert Pyun's throat, just go to the graveyard and look for big Pun – rumor has it he's not using his organs much anymore.