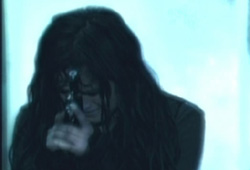 "I... I didn't realize you were filming the movie in a tanning bed! I'm pregnant! *sniff*The next scene has a slightly less subtle focus: Big Punisher making funny faces at the camera for five minutes. Fellow untalented Latino rapper Fat Joe is also featured in this scene; unfortunately, the sheer amount of gravity Big Pun creates when he is in a room causes Fat Joe to speak very slowly and repeat himself approximately fifty times.

For dramatic purposes, here is approximately what goes on over the next five minutes:

Fat Joe: Yo Pun, why yo' head look like a ball of dough rolled in pubic hair, dog?

Somehow our friend Basquiat is suckered into visiting the burned-out shell that was the "Friendship Church," along with two friends, who I have taken to calling "Jamiroquai" and "Top Knot." Jamiroquai finds it necessary to dress in carpet, and Top Knot, besides his amazing haircut (which is literally glued to the back of his head), carries around one of those "Mystical Dragon Blades" that guy at the mall sells. You know, the one guy with the wallscrolls.

Things don't go well for Basquiat and Co. at the church. They are almost immediately attacked by Snoop Dogg, who they discover is eating the souls of some white people he killed earlier in the movie, then sending them through some Mortal Kombat-style portal.

Up next is the chase scene, which leads me into the next problem with "Urban Menace": Albert Pyun has absolutely no business anywhere near a video camera, especially when an action sequence is involved. This movie is barely an hour long, yet the next ten minutes are filled with the most repetitive scene I have ever had the misfortune of viewing. Instead of showing one fluid shot with Snoop Dogg running and Basquiat chasing, Pyun shows one party running, then the exact same shot with the other group trailing. Multiple times. Snoop Dogg runs around a corner and the camera trails him to the end of the hallway, then Basquiat and Co. run around the same corner and are shown the exact same way by the camera. Change the setting with things like "a staircase" or "a sewer tunnel" and you can easily imagine the movie without giving some acne-faced jerkoff at Blockbuster $2.50 to watch it with your friends.

Up until this point Snoop Dogg has exclusively killed white people. Towards the beginning of the film, when there was no sound, he attacked two white folks for trying to run away from a bum who was attacking them. A few minutes later he killed a few white cops. For the first time in the film he confronts black people, and what does he do? He runs. If the makers of this movie were intelligent enough to understand the term "subtext" I might think there was a conspiracy going on here. Whatever the case, he hits Basquiat in the knee with a broom handle and disappears into the bottom of the church.

Basquiat, who is severely allergic to broom handles and thus has a broken leg, calls for backup. This prompts Big Pun to drop his ham sandwich and call in an army of thirty identically-dressed dudes towards the church. 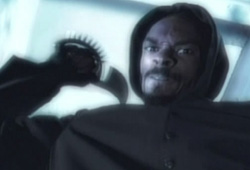 "Watchoo talkin about Dungeons and Draggons, nigga? This knife's the shit!"

Here is my question: You're running a street gang full of untalented actors, right? You have a long-standing, yet totally undescribed, feud with a soul-sucking preacher who also happens to be a multiplatinum rapper and a terrible actor himself. There are hundreds of men in your gang, and you know the evil preacher is living in the burned-out shell of a church. What do you do? If you're a smart person, you send half of your people in packing, since not even a skinny pothead in a nylon Halloween veil can take on that much black anger. Well, reader, you are not Albert Pyun. You did not make a film that was originally called "Glaring Plot Holes: The Movie," and since you are reading this chances are you're not stupid enough to make something like this and at any point think it shows promise. You did not, in short, fail to explain why Big Pun did not send his army out in the first place. Congratulate yourself, reader, because you could be a drug addict, a child molester, or Adolph Hitler himself and you'd still be better than exactly one person in this lonely old world.

While we are on a little rip on Pyun, let me give you a few more facts about him – above anything else, he loves slow motion shots and Scooby-Doo style montages. In fact, the movie's second name after "Glaring Plot Holes" was "Slow Motion Shots and Scooby-Doo Style Montages: The Movie." Unfortunately, some legal issues arose when Dick Clark threatened to kill anyone involved with this movie if they referenced his work, so they stuck with "Urban Menace" even though the movie is only vaguely urban and about as menacing as taking a big dump and being afraid to look in the toilet afterwards.

And, of course, we are the one's suffering for Pyun's art. After Basquiat calls for backup twenty of the movie's final thirty minutes are almost completely devoid of dialogue (not that we could hear any in the first place), instead opting to show Snoop Dogg killing people the exact same way over and over in slow motion while Ice-T's custom-made music blares in the background.