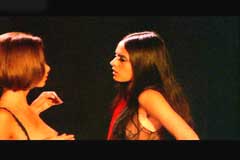 Nadine doesn't really love the mannequin, she's just using it to get back at Linda.

For no reason whatsoever, Linda returns to the creepy hotel. She doesn't even bother going in the front entrance, but instead goes to the cellar door. Surprise surprise, she runs into Memmet! The lumpy psychopath must have a little of that good ol' Morpho juice running through his veins, as well, as he is somehow able to choke Linda into unconsciousness in about two seconds. Omar, being the man of action that he is, takes charge of the search for his missing girlfriend by going to the theater. Once again, he sees Nadine perform her mannequin and candelabra show. Jesus Franco didn't even bother to shoot new footage. The show is just a slightly different compilation of the footage from the performance at the beginning of the movie. Even the repugnant audience is the same. When Omar saw the show the first time, it didn't bother him in the least, but this time when he sees Nadine bite the mannequin woman's throat, he's sure it's murder.

He returns to the hospital and sees a different doctor. He angrily explains that Linda is missing and that he's certain that she's in the hands of Seward's killers. He also believes that Nadine has something to do with it, because she killed a girl onstage. Naturally, if there are two murders in one country, they must be related to a missing person case. Omar's points make sense to me, since I'm insane, but why the hell did he go to a doctor with that information? Does Turkey not have a police force? Well, as luck would have it, these doctors not only can tend to physical, mental, and supernatural trauma, but they also solve crimes, so the doctor agrees to follow Omar to the island. 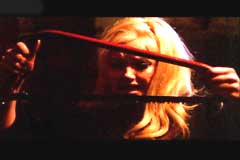 Linda wakes up to find herself tied to a chair in the wine cellar of the hotel. Memmet, who could really benefit from a knot-tying class, as well as a haircut and a shower, enters carrying a hacksaw. In typical movie lunatic fashion, he babbles on about how he is going to inflict pain on her until she loves him for it. I'm almost tempted to kidnap and torture a woman just to see if that works. Personally, if I was tortured to death, I think my feelings toward my captor would run less along the lines of love and more toward seething hatred, but that's just me. Linda loves the idea of spending the rest of her life in agonizing pain, or so she tells Memmet. That prompts him to rant for another few minutes. Eventually, he reveals that Agra was his wife before she went to the island and disappeared. Frankly, I think she's just using disappearing as an excuse to get away from Memmet. Being married to him has got to be like sleeping next to a giant potato. Memmet is stupidly convinced that Linda really does want him to give her unspeakable pain, so he unties her so she can enjoy it. Linda picks up the hacksaw and uses it to chop of Memmet's head. How one chops with a saw, I'm not really sure, but given all the sense that the movie has made so far, I think I can manage to let that one slide. 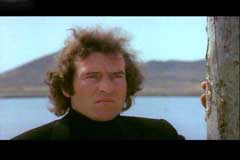 As soon as she is free, Linda returns to the island, which raises the question, why the hell did she go to the hotel in the first place? Nadine is despondent when she arrives. The kite, moth, and scorpion are probably despondent, too. At least, that would explain why they keep popping up. Linda and Nadine make out for a while, then Linda bites her neck. Whoa, a little role reversal, there! Kinky! Then Linda plunges a knitting needle into Nadine's eye. That's decidedly less kinky. Morpho, who was naturally watching the whole thing, rushes into the room. In a fit of despair over the death of his mistress, he yanks the knitting needle out of her eye socket and stabs himself in the stomach with it. Thus does the legend of Morpho come to its bitter conclusion. The kite falls and the scorpion drowns, which is what it gets for going in the water in the first place. I assume the moth dies, too, but they don't show it. Omar and the doctor show up just in the nick of way too late and find Linda curled up on the floor. As they all sail home, Linda contemplates what life will be like without Nadine and the audience contemplates if she's actually going to get away with freaking double homicide.

I will definitely give "Vampyros Lesbos" points for style. Nadine's fiendish lair is decorated with the trendiest Eurotrash crap that 1970 had to offer. From chairs that serve no purpose to a square jigsaw bed made out of lesser furniture, the house has everything that a vampire could need to entertain her one guest. The problem is, Nadine supposedly inherited the estate and everything in it, which would mean that Dracula was into post-modern decor. That right there is a good example of the the movie's major flaw - namely, it doesn't make any fucking sense. The liberties taken with the vampire myth make the supernatural presence in the movie basically negligible. The fact that Nadine likes to drink blood never becomes a particularly important plot point. She doesn't kill anyone or drain Linda for sustenance. She might as well just be a charismatic woman. All that she has to do is make Linda think about her, which isn't that tough. I think Linda would most likely remember the woman who had lesbian sex with her the first time they met.

The piss poor plot is accented by the horribly repetitive camera movements. The camera hardly ever panned left to right, it had to whip from one close up to the next. There are series of close up shots that stretch on for so long, I actually had to wonder if the characters had torsos. The whole mess is nicely augmented by the oddly chosen score. The music ranges from shrieking electronic voices to moog organs and jazz guitar. Supposedly Quentin Tarantino borrowed the "Vampyros Lesbos" score for "Jackie Brown." I haven't seen "Jackie Brown" in a while, so I can't verify this, but I don't remember it having a particularly sucky score, so I tend to doubt it. As a man who reviews cheesy horror flicks for a living, I can say that this one blows. I've never been so bored by lesbians. If the world needs a lesbian vampire flick to turn into a cult classic, there must be a better one out there. I will now take it upon myself to find it.