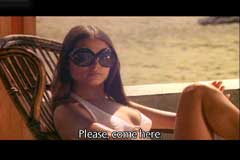 In the 70's, vampires could wear gigantic freaking sunglasses and still be cool.

Linda leaves for the island the next morning. She is supposed to meet the Countess Nadine Carody there to help her with the legal aspects of her inherited estate. It's vaguely reminiscent of Dracula, except that the words "vaguely reminiscent" really shouldn't be applied to direct and obvious plagiarism. Linda arrives on the island in the early afternoon and sets off to find the Countess. Despite having an entire island to search, this task proves remarkably easy. She finds Nadine sunbathing on a lounge chair. In case nothing struck you as odd about that last sentence, let me piece together a few things for you. Nadine is the woman from Linda's dream. She is also the woman from the performance. That is to say, she's a freaking vampire, and she's sunbathing. WITHOUT EXPLODING.

So let's see, the vampire enjoys the sun and reflects in mirrors. So really, she's less an undead queen of the night and more some bitch who gets her jollies by guzzling blood. Yippie ki-fuck. But you know what? I'm fine with that. A lot of vampire movies throw out the standard rules. Sure, the sunlight thing is one of the most major ones, but I'm willing to suspend my preconceptions as long as the rest of the film manages to adhere to its own system. So, the good Countess explains that she is a descendent of Dracula (but not a vampire!) and that she - OH COME ON! If you're going to violate every major vampire cliche, at least have the common decency to not relate your vampire to the most famous vampire in horror history! Everybody fucking knows that Dracula couldn't face the sunlight and didn't reflect in mirrors. That's basically where those two rules came from. So now this movie has ripped off the Dracula storyline AND used the Dracula name, but it blatantly disregarded the actual details of the Dracula legend. Brilliant. 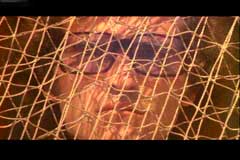 No mere net can withstand the awesome fury of Morpho!

Linda and Nadine get right down to business, and by "business" I mean "swimming naked and then rolling around in the sand, also while naked." They have got to have the best lawyer-client relationship I've ever seen. Linda is nervous for the first 0.003 seconds, but Nadine assures her that no one can see them. Of course, that's the cue for Morpho, Nadine's gigantic blue sunglasses-wearing henchman to stand out in the open and watch them. For the record, Morpho rocks. He can't act and he doesn't do anything worthwhile (except for wearing gigantic blue sunglasses), but saying his name gives me happy-mouth. Try it! Morpho!

After the nude romp, the two women enjoy a glass of drug-free, rufie-less red wine that in no way resembles blood. Oddly enough, Linda passes out after gulping down one glass, but not before Jesus Franco gets a chance to show off his directorial brilliance though a series of shot-countershot close ups that goes on for far too long. Nadine expresses her deep concern for Linda's well being by having another glass. While Linda is unconscious, she dreams that Nadine comes to her, they have incredibly awkward lesbian sex, and then she bites her neck. But was it really a dream? Well, yes and no. She wakes up completely naked, but bite mark-free, which is how I wake up each and every morning. She goes searches desperately for Nadine. Unfortunately, for Spanish Germans living in Turkey, desperately searching consists of shouting a person's name twice, then giving up. Nadine has a gigantic estate on her own private island, and Linda abandons all hope when she can't find her in two rooms. That's dedication. Eventually, she succeeds in finding her... finding her corpse, that is! Oh, I'm ever so witty! Nadine is doing what she does best - floating on her back in a pool wearing nothing but a scarf. Linda faints, and thus the first island sequence comes to an end. Oh, there's also a shitload of random shots of a kite, a moth, and a scorpion thrown in there. Sorry I forgot to mention those ever-so-worthwhile bits of cinematic gold. Also, one thing struck me as odd. I mean, besides the stuff that I already mentioned. Linda instantly recognized the woman at the performance as the woman from her dream, and yet when she met Nadine, she didn't make the connection. It's the same woman! Nadine must have used her amazing vampire powers to cloud Linda's mind. Or perhaps Linda just didn't get a clear look at Nadine's face while it was ensconced in her vagina. 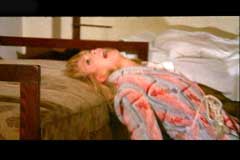 Agra is driven mad by the knowlegde that Nadine will never want her as long as she keeps dressing like a bathmat.

We make an irksome transition to a mental institution where a young woman, Agra, is writhing and screaming in bed. Not including the mannequin woman who never says or does much of anything (you know, because she's a mannequin), there are all of three women in this movie. For some reason, they decided to cast two that look as much as possible alike to play Linda and Agra. Agra has the same skin tone, eyes, hair color, and hairstyle as Linda, but other than that they are perfectly easy to tell apart. Dr. Seward, A.K.A. the worst excuse for a doctor since Dr. Dre assesses Agra's situation from a very scientific standpoint. That is to say, she's insane and he doesn't care. Agra is the film's homage to the Renfield character from Dracula. Note how I said "homage" and not "blatant rip off." Note how I used the wrong word. Agra is upset because Nadine left her, and she wants some more girly lovin'. Linda is in the same hospital for basically the same problem. That's when Omar shows up to save the day like the big-haired anti-stud he is. Linda recognizes him and snaps out of her daze, so Dr. Seward lets Omar take her out of the hospital right then and there. Linda tells him about finding a dead woman in the pool, but nothing about seeing Memmet kill that girl or any of the other conversation-worthy things that happened to her. All the while, she longs to return to the island. Well, actually she just looks wistful, interspersed with clips of a kite, a moth, and a scorpion, but I'm taking poetic license with my interpretation. 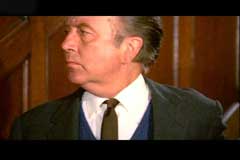 Dr. Seward, seen here not attempting to strike a dramatic pose for the camera. No sirree.

Nadine has severe rejection issues and confesses to Morpho (yay Morpho!) that she is obsessed with Linda. She really should have thought of that before she decided to float naked in the pool until Linda fainted, then ship her off to a mainland mental institution. That was just poor planning. Also, shouldn't the victim be obsessed with the vampire? I'm pretty sure this situation officially makes Nadine a shitty vampire. I hope she gets kicked out of the club. The good times are shortlived for Linda and Omar. They have to time have some reunion sex, but soon after that, Nadine and Morpho (yay Morpho!) are seen slinking around the mainland. I'm not even going to bother getting into how Dracula-esque vampires can't cross running water and the only way off Nadine's island is by boat.

Rather than abducting Linda, Nadine attacks Omar in an attempt to remove him and his large plastic hair from the picture. Omar ends up in Dr. Seward's hospital, which apparently handles every form of medical emergency in one convenient location. There, Dr. Seward tells Omar all about his insane vampire research and informs him that he is in no danger of succumbing to the dark forces of the vampire, but Linda is. He can tell these things, because he is the only source of information about vampires and all that he says and does is right. I'm not making fun of him, he actually says all that. Then he kicks Omar the hell out of his hospital. Shortly thereafter, Dr. Seward receives a visit from Nadine. Seward almost manages to repel the vampire by reciting a bible verse, but no mere book can defeat the amazing might of Morpho! The blue-lensed henchman rushes to his mistress' aid and strangles the doctor. For his part, Dr. Seward doesn't put up much of a struggle. He barely even flails his arms and dies within ten seconds. It could be a poor acting job, but even more likely he just fell victim to the awesome power that is Morpho.