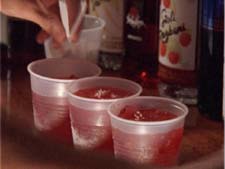 The secret ingredient is love. And drugs.Nikki and Sara are awakened by a passing police officer, who doesn't have a whole lot of sympathy for their hangovers. He also doesn't have a lot of sympathy for the fact that now three of their friends are missing. He also doesn't have a lot of acting ability. But then, he is a member of the supporting cast, so he's allowed to be flat and expressionless. When everyone else is so monotonous, it makes the leads look positively overwhelmed with emotion by comparison, which is nice, because otherwise the audience might notice that only now are Nikki and Sara even starting to begin to care about the fact that their friends have vanished. The two of them return to the voodoo shop. There, the old voodoo woman is so moved by their concern for their friends that I swear she almost blinks. She tells them of a bayou voodoo cult that she thinks may have been abducting girls during Mardi Gras for use in their sacrificial rituals - in other words, exactly what the movie's text intro said. She gives them an aged map of the bayou to help them find the cult. Now, we've already had Mardi Gras, voodoo, and the number of the Beast explained to us, but this one trumps them all: Sara asks the old voodoo lady to explain what a bayou is. Ow. My brain cells.

The old voodoo lady gives them the map, but makes them promise to return it and to not show it to anyone else, lest something terrible happen. The moment they step outside, Nikki and Sara are immediately accosted by Rick, of all people! Remember Rick? Yeah, neither do I. His plan of going to New Orleans and just wandering randomly until he finds the three or four people he knows paid off after all! Naturally, the girls don't even hesitate to show Rick the map that they promised the wouldn't show anybody. They don't exactly tell him what's going on, but he tags along anyway, because dammit, he flew across the country to beat his girlfriend, and beat his girlfriend he shall! Before going to explore the bayou, they go back to the Necromancy place so Nikki can get her gun. Then the pursuit begins! 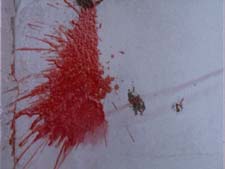 Suddenly I have a strange urge for pasta. And drugs.

This travel sequence is at least as bad as the road trip one. And you'd best believe that there're plenty of shots of the camera panning over the bayou map. They explore all over New Orleans, but oddly enough, at no point do they actually go anywhere near an actual bayou. The last thing you'd want to do while searching for a bayou cult with a map of the bayou is to get within ten miles of a bayou. That would just be silly. Instead, they end up at a graveyard, which is much more conducive to a bunch of guys running around in grim reaper robes than a few feet of stagnant water.

One of the cultists gets the drop on our heroes and slits Rick's throats with his scythe. In typical crappy horror movie fashion, the slitting of a throat is represented by an incredibly fake-looking blade being dragged across the victim's throat, then a follow up shot of a wall getting sprayed with blood. The role of the blood in "Voodoo Tailz" is played by Ragu's Chunky Homestyle Tomato Sauce, from the looks of it. So Rick dies, which should teach him to do something as stupid as flying from California to Louisiana because his girlfriend flashed some people at Mardi Gras. It should also teach Nikki and Sara that when an old voodoo lady tells them not to show a map to anybody else because something bad will happen, they should keep the fucking map to themselves. Damn teenagers.

One of the cultists knocks Sara out and carries her off. Zirilli somehow feels that it would be appropriate to show what it is like to be carried off, even though Sara is unconscious. So now instead of the usual incredibly shaky camera, we get treated to a shaky, upside down camera! Yippee ki-yay ki-go kill yourself! Nikki manages to escape, but not before she sticks her gun under one of the cultists' robes and shoots him in the crotch. I know the gun is shooting blanks at best, more likely just caps, but still, ouch. 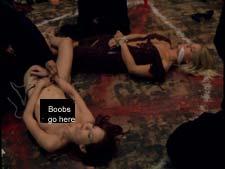 I used to have that carpet, but mine didn't have as many half-naked girls on it.

We find Sara naked, bound, and poorly gagged next to a clothed, bound, and equally poorly gagged Rose, laying on the floor of some shack. I say "poorly gagged," because while there are certainly pieces of cloth wrapped around both of their mouths, they don't actually inhibit speech in any way. In fact, the two girls are able to carry on a conversation until the cultists show up and ruin the lovely moment. The cultists - all three of them - remove their hoods to perform the ancient ceremony of pouring blood on hot chicks. You'd better get some tissues and get ready to do some cleaning up, because this twist is going to blow your mind! The cultists are... the sketchy bartender, the Necromancy place owner, and the fat, ugly, hairy, bored loser from the voodoo shop! Really! Not three other actors at all, but those guys! Not somebody different! Them! Can you believe it? I swear, it's like three Keyser Sozes at once, but without all the gimpiness. So, the entire cult is comprised of a scrawny punk bartender, a fat hairy guy, and a satan-worshipping Jason Lee wannabe? Man, the bayou is a weird place. Just then, the cops burst in and start shooting and arresting people at random. And oh ho! It turns out the older black guy is really a cop! One of the cultists starts to make a break for it, but luckily the police let Nikki come along and carry her gun, just like in real life, so she takes him down. Fantastic.

At the police station, the big black cop explains to Sara, Rose, and Nikki that he had been following them because he thought the cult might target them. Also, Luna is okay, but she was drugged heavily, or some other excuse for why she couldn't make it to the shoot that day. Also, the weird voodoo statue that Rose stole was bugged and had cameras in it, which is how he was able to watch them changing. That's right, the cops and the old voodoo lady are in cahoots. Sure, for the bugged statue trick to work, a college girl would have to go into that shop, see the statue, buy or steal it, take it with them, and become the target of the bayou cult. It seems a little unlikely, but hey, this movie sucks. So Rick died, but all the girls turned out okay. But wait, what about Nikki's sister, Jackie? Wait for it... wait for it... think back to the very beginning...

Enter Daniel Zirilli as another cop. He tells Nikki that they found her sister's body, and she bursts into tears. Now I ask you, was the repetition of that scene really necessary? Did it add a damn thing? Wait, why am I asking you? i'm the movie reviewer here. So allow me to answer my own questions thusly: I hate Daniel Zirilli. 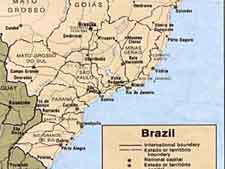 I must have done something horrible to deserve this.

Mardi Gras may have been saved, but that doesn't mean every locale-specific celebration can breathe easy. We skip to Carnivale in Rio. We know this is Carnivale in Rio because the camera scans over not one, not two, but three fucking maps that say "Brazil" on them. The shots of Carnivale themselves are way too shaky and blurry to make out any details. I have to assume it's just more footage of Mardi Gras, but shaken violently. We then see a woman walking along an empty beach. The screen goes black and she screams. You can draw your own conclusions. Mine goes something like this: Zirilli wanted to end this thing a while ago, but he couldn't pad it out past the hour mark without working overtime. Even with this lame Rio ending, the movie is still only about seventy minutes long. Nonetheless, I want my seventy minutes and faith in humanity back.

The mood in "Voodoo Tailz" is so low key that it is easy to miss a lot of the logical black holes and huge plot inconsistencies if you don't stay sharp. Zirilli would love to just slip a few major fuckups right by you. He does his best to distract you with pretty girls and an endlessly repetitive soundtrack of the same three or four dull, generic rap songs. But all it takes is one atrocious special effect to snap the viewer right back to the harsh reality of this movie: it blows billy goats and says "thank you" when it's done.