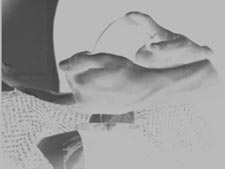 Yes... I see...We see a pair of hands pouring stuff into other stuff, but it's all through a filter that, like every single visual effect in the entire movie, makes it absolutely impossible to tell what's going on. Luckily, it doesn't have anything to do with anything, so we don't need to care! That sure is a load off!

We cut to Nick's house the next morning. Nikki is roused from her all-night bout of slutting it up by Rose knocking on the door. So I guess Rose made out alright after all! What a relief. And here I thought she would have to wander the streets all night in search of her friends, frightened by every unfamiliar face of every drunken letch she passes, stumbling over her broken heels, muttering to herself incoherently, desperately hoping that the perverts, rapists, and other denizens of the night in New Orleans, the murder capital of the world, don't decide that her nubile body is just ripe for a quick forced screw. But instead she didn't! How lovely for her. Nikki is only remotely apologetic for not picking up her phone, which is considerably more than she's concerned for either Luna or her sister when she hears that they're missing. Her logic is that they're probably still out partying. Plus, the previous year Jackie disappeared for three days when some guy she randomly hooked up with flew her to Vegas. So that's good, then. Very reassuring. 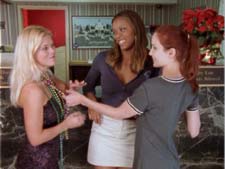 Sadly, these three girls never get it on. They talk about it, though, which almost makes it worse.

Rose and Nikki leave Nick's house under the pretense of going to catch up with Luna and Jackie. A phone call from another friend of theirs, Sara, who is conveniently also at Mardi Gras, but who came with a different group of girls that ditched her. It's all very likely and doesn't seem in the least bit thrown together as a flimsy rationale to bring in a cute redhead. They give up the search for Jackie and Luna and go straight to the hotel to meet Sara. Supposedly Rose made reservations for that night at the hotel, but the clerk is too busy staring at the text-only entry page of www.lesbian.net (it doesn't exist, I checked). Seeing that the clerk's attention is elsewhere, Nikki and Sara make out with one another until he tells them that there is an available room at the house down the street. He then sends the owner of that house an email with their pictures on it, which is quite possible, since all shitty motels these days are equipped with digital cameras that instantly take head shots of everyone who approaches the counter and automatically loads them into any email that the user creates. Really, they are.

The girls go down to the house, which subtly enough has a sign hanging out front that says "Necromancy." The place is filled with satanic decor and the owner, who, like every member of the supporting cast, acts like he's on a heavy dose of Valium, tells them that one room and one room only is off limits to guests. Oh, and their room costs $66.60, a satanic reference that would be obvious to anybody who hasn't been involved in an unfortunate boating accident. Nonetheless, Nikki points out that yes, 666 is the sign of the devil, just so the slow kids in class can catch up to speed with all the "Voodoo Tailz" excitement. Also, they have to sign for the room in blood, not that any of that is a little ominous or anything. The girls go upstairs and decide to go out searching for their missing friends. First, though, they all have to change. The second Rose puts a hand on her shirt to remove it, porno-quality R&B starts playing. The Academy really overlooked this movie, you know? 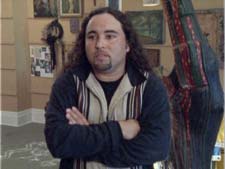 Sometimes when he gets nervous, he sticks his hands under his armpits, and then he...

Once they're all properly dolled up, the three girls hit the streets in search of their friends. And by "in search of their friends" I mean "so they can ride in a carriage and eat white powdery pastry things while looking at the camera." Nikki bumps into some guy on the street, but since she's obviously a huge ho, he forgives her and invites her to the bar where he works for a free drink later on. You know, a "free drink." Wink, wink. Nikki is fine with being hit on by some scraggly bartender, but when a older black guy checks her out from across the street, she gets all indignant and leads her friends into a nearby voodoo shop. There, the fat, ugly, hairy, bored loser who runs the cash register directs them to the owner of the shop, some old voodoo lady. The old voodoo lady has the impressive distinction of having the most monotone delivery in the entire movie. With competitors like the Necromancy guy and the fat, ugly, hairy, bored loser, that's really saying something. If she didn't have those tarot cards to shuffle, she'd probably fall asleep just listening to herself.

Rose asks the old voodoo lady to give her a card reading so she can find out where Luna and Jackie are. But voodoo is a fickle mistress, and also I don't think the old voodoo lady was really paying attention to Rose's question, so the answer she gives is not exactly what they were hoping for. She has Rose cut the deck of cards, but when she does, the screen takes on a red tint for a second, which is Daniel Zirilli's way of saying that something spooky is going on, and also that he has no special effects budget. The old voodoo lady tells Rose that she is in great danger. That Rose is in great danger, that is, not the old voodoo lady. One might wonder just how a girl with the obvious street smarts and common sense of Rose could end up being in danger, but that's just one of the many mysteries of "Voodoo Tailz." Somewhat, but not really rattled by the voodoo lady's predictions, the three girls leave the shop, but not before Rose can steal a weird statue in plain sight of the fat, ugly, hairy, bored loser. He doesn't even try to stop her. He knows the statue's true power. At least, that's one rationale. Another could be that he's too busy getting hairier to stop her. 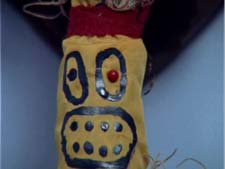 What an odd-looking... figurine.

Rose, Nikki, and Sara go back to their room and get into their color coordinated nighties, and get ready for bed, despite it clearly being mid afternoon. As Sara goes to close the drapes, she notices the older black guy from before is peering into their window from a nearby balcony. Rather than calling the cops or alerting the manager or anything that a, you know, sane person would do, she just closes the flimsy opaque drapes that don't block out any light whatsoever and climbs into bed. Rose curls up with the voodoo doll that she stole, because as we all know, voodoo dolls are meant to be snuggly little teddy bears. I know that's how I think of them. Sara wakes up early and goes downstairs for the sole purpose of looking into the forbidden room. On the way down, she passes a cat. One cat = one tail. If only there was one more cat, the title might have some sort of meaning! Oh well. The owner catches Sara in the forbidden room of death - I'm not trying to be cute, the room is filled with death stuff - but he's not angry with her for violating his only rule, because anger is an emotion, and emotions are hard to act. He does give her a friendly warning, though:

Owner: "Do know what happened to the cat?"
Sara: "No."
Owner: "Curiosity killed it." 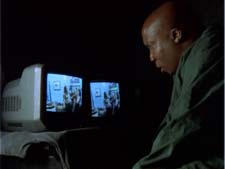 Oh my dear sweet Jesus. There needs to be legislation passed against dialogue this bad. Mercifully, their conversation ends and the owner gives her a towel and sends her back upstairs. Rose, in the meantime, dreams of Luna stumbling through the streets. According to Rose's description later, she looks beaten and bloody, but there is a visual effect used during the dream sequence, so it's really impossible to tell, since once again every visual effect in this movie is only detrimental to the picture quality. Rose puts the doll on a shelf, mentioning that it can watch them get ready to go out. The girls proceed to change and party it up in their room in a sequence that could have easily been cut in half without missing anything. We occasionally cut to the black guy who was peeping in on them earlier, who is now watching them on two television monitors. I swear to God. Other things I swear to God include: my undying hatred for this movie, that I will exact my revenge on Daniel Zirilli one of these days.

So now it's roughly twenty-four hours since anyone last heard from Luna or Jackie, but hey, it's Mardi Gras, so who cares! They head down to that bar where the random sketchy guy Nikki skanked into works. He makes them their free drinks, and even puts in his own secret ingredient. Now, I'm not exactly sure what that ingredient is, but if I had to guess, I'd say it starts with an "R" and rhymes with "goofies." The girls take their doctored drinks and leave to enjoy the next Mardi Gras party montage. Soon, though, the drugs take hold and the girls find a table somewhere that they can slump around. Rose manages to get up to go to find a bathroom. Unfortunately, it's down a dark alleyway, and she doesn't take kindly to dark alleyways. I know this because she says, and I quote, "Aw, I hate dark alleyways!" It doesn't get much clearer than that. And she has good reason to not be thrilled about this particular alley, since she is immediately kidnapped by some guy in a black robe. Talk about your irony!