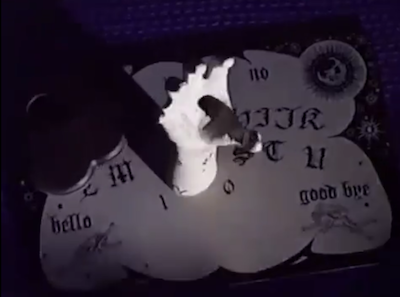 We can't just let that RIFLECAPE thing go. One of the main plot points of this movie is ghost dyslexia. Ghost...dyslexia. In a movie based entirely on spelling out cryptic messages from the great beyond, the grand mystery is that ghosts can't fucking spell. Goddamn it, that's not a valid plot twist. This is the moral equivalent of rebooting The Sound of Music and making the entire von Trapp family deaf-mute.

For us, the apex of all the stupidity has to be the Ouija intervention scene, wherein one of pixie girl's worthless suitors tells her that she's now addicted to Ouija and being slowly possessed by a demon, according to a book which is entirely too long given its stupid subject matter. Then he takes the Ouija board and throws it in the dumpster right outside, and congratulates himself on a job well done. Because the best way to help an addict quit is to take their stash and move it about 50 yards to the most obvious place you can think of. Not, say, burn it, or smash it, or just break it in half, or maybe throw it in that fireplace we spent 30 minutes obsessing over. No, the flimsy piece of cardboard which doubles as the fountainhead of all evil in the world just can't be stopped, until somebody finally thinks to try:

Man, she got some great distance on that ghost, excellent follow-through on the swing.

We'll give credit where credit is due: there were actually some competent people involved in Witchboard 2. In particular, there's a stunt driving sequence when the ghost lady possesses a car that actually verges on becoming entertainment. But ultimately, it doesn't matter, because this is a horror movie about a goddamn Ouija board. When the plot of your movie hinges completely on scenes in which grown adults have to spell out otherworldly messages one letter at a time like a demented episode of Sesame Street, no amount of talent can save you. They could attach Alejandro Iñárritu and Leo for the sequel, and they still wouldn't be able to salvage this premise.

Wait, what do you mean there's already a sequel?