Wizards of the Demon Sword

Particularly brave souls reading this should probably click here to get an idea of the dialogue in Wizards of the Demon Sword. This scene is where Thain and Melina are looking for food outside Albuquerque. After a little wacky banter, they spy a claymation dinosaur accompanied by playful beep-boop music. Thain kills it with a throwing knife, Melina is unimpressed, and we get a well-timed wah-waaaaahhhhh. Oh, Thain! 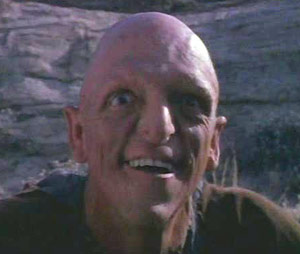 Okay, now seriously. How in the hell do you put this guy in a movie and not have him in as many scenes as possible?

Our heroes' travels are interrupted by the attack of that crazy-looking bald guy from One Flew Over the Cuckoo's Nest. How you fail to give this dude more to do in a movie, I have no idea. I would rather watch this cat just stand around looking freaky than watch Thain dispatch a hundred fat ninjas. Unfortunately Baldie gets about four lines, perhaps because he was involved in the same drinking game as Tierney and Tarantino. I'm starting to wish I was at that party. Anyway, they kidnap Melina and take her back to the castle, leaving Thain tied to the ground with some flimsy stakes.

Thain awakes to a pretty big snake lying on top of him; the snake does not attack, but slowly and laboriously crawls across his chest and exits stage left, presumably because it has the same agent as Tierney and the Cuckoo's Nest guy. Fortunately help is on the way in the form of Damon the wandering hairdresser of Santa Fe, masterfully played by Fred "The Wonder Years" Savage. After some bracing dialogue, Damon frees Thain and they stagger around trying fruitlessly to whack each other with fiberglass swords before collapsing in a vaguely homoerotic pile and agreeing to travel together for the mercifully short duration of this merry quest.

Back at the castle&oh god, I can't do this. Let's fast-forward. 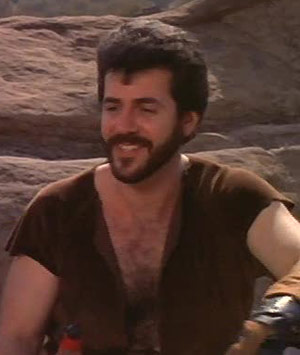 WRHW-RWHRH-WRHWHR-HWWHR-HWRH-WRH-WRHR. I will only observe that at some point in her imprisonment Lord Khoura inexplicably decided to give Melina a perm. Meanwhile, Thain and Damon infiltrate the castle with little difficulty, despite the sudden appearance and even more sudden disappearance of a midget guard. No, I don't know. "Heh, a midget," comments Thain. Indeed, Thain. "Heh", indeed!

Khoura dresses Melina in a kinky black outfit, ties her up, and threatens her with torture if she doesn't reveal the secret of the Blade. Fans of more recent films like Hostel will doubtless perk up at the prospect of sadistic torture, but that would mean that this movie had some semblance of balls. Rather, we get Khoura saying he's gonna torture her about eight times, then he *ring* hell yeah bring 'em over!

Since I've already undergone hypnotherapy to remove the sundry details of this plot from my brain, I can't tell you if any of the Blade's secrets are revealed. Thain and Damon separate since they can obviously spread more retardation over a larger area that way. Ultimately I'm too kind a soul to follow through with my promise of wasting 90 minutes of your time, so I'll save you fifteen straight-up mind-numbing minutes right here: Thain is captured, Thain gets locked up, Damon rescues Thain along with Melina's father, there's some fighting, a bunch of guys in mullets get Thain's sword jammed between their arms and their tummies, and Damon sits on a nearby throne looking oddly satisfied that The Wonder Years was clearly only the beginning of a blossoming cinematic career.

Melina gets rescued by Thain, Thain and Melina make their escape, Damon gets killed by Khoura, Khoura wrestles with Thain, Thain stabs Khoura, Thain kisses a blonde horse, Finkle is Einhorn, Einhorn is Finkle and I gouge my eyes out before preparing to carpetbomb my local indie video rental joint. Do you care? Hell, I just sat through this piece of crap and the only care I have is tracking down remaining copies of Wizards of the Demon Sword and placing them in one of those underground vaults where they keep the Ebola virus and shit. Buy this for anyone you truly hate, the sort of hate where you say their name out loud and your eyes briefly wash over with crimson. This is for them, it was made for them. It's not bad enough to be good, it's not funny enough to be bad, it's not dumb enough to be funny, it's not cheesy enough to be dumb. Somebody please rename this movie to Cinematic Underachievers of the Good Christ We Suck.