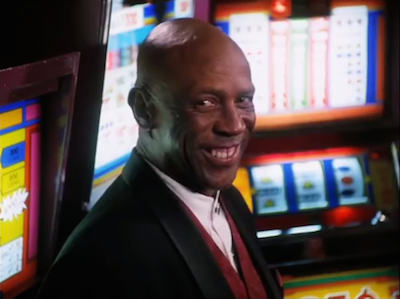 Back to the elephant in the room: the stupid fucking premise. Little did we know that the Y2K bug wasn't a problem with computers all around the globe, but was actually localized to one fully-automated ICBM silo in the middle of the Colombian jungle. The missile silo is programmed with amazing space-age artificial intelligence, which quickly concludes that if the year is 1900, then it must be time to fire all surface-air missiles in case the base is overrun by crazy gold prospectors and Chinese opium dealers on steam boats! Oh, and also to blow up Moscow, that goes without saying really. So Uncle Sam sends in the marines to stop it, and they get in, but wait, this was all an excuse for a double-cross by some of the soldiers, so they can...give everyone on the Eastern seaboard Gulf War Syndrome? What the fuck?

Yes, the big villain in this sordid tale is a fat guy who gets symptoms of bloating and chronic diarrhea ever since the Gulf War, with no known cause that doesn't point to his own binge-drinking and high levels of burrito consumption, so he's taking his frustrations out on Uncle Sam by launching a chemical weapon at Washington. Supposedly the same chemical weapon he and his men are "dying" from, although we really have to point out that the Gulf War ended in 1991 and this movie is set in...well, it's a little vague, but we're going to say right around January 1, 2000 or so. This doesn't seem like the most justified mass murder we've ever heard of, is what we're saying.

In fact, if Colonel Pillsbury was really so concerned about the health of his troops, maybe he shouldn't have brought them all down to South America to get slaughtered indiscriminately:

Goddamn, this makes the Bay of Pigs look like the invasion of Panama. It's like Solid Snake just crawled by and left a shitty porno mag by their feet and then shot them all in the face before any of them even realized it. The real premise of Y2K seems to be that elite squads of U.S. marines are the worst and most ineffective combat troops the world has ever seen, somewhere below Persian peasants armed with blunt sticks or yeomen in the Mongolian navy. They get beaten repeatedly by coked-up Colombian drug farm guards and Ewok-style wooden traps. Those "Stolen Valor" guys need to switch from harassing guys in Army t-shirts at Applebee's to finding and destroying every single copy of this movie, because if enough people see it there won't be any valor left to go around.

We haven't even touched the bald-faced intellectual property theft portions of the movie, like the green-goo chemical weapons which look like they came from the dumpster behind the set of The Rock, or lifting footage directly from Predator and Basic Instinct and somehow getting away with it. On the other hand, there's something to be said for unoriginality, because sometimes when people try to create something new and original, this happens:

We have nothing to add to that, except to say that we swear to God that we didn't edit it.