Hotel staff in Brussels are accusing senior members of the youth wing of Sweden's Social Democratic Party of leaving a bedroom covered in human poo and paying a chambermaid only €50 to clear it up. Staff at the Hotel van Belle in Brussels say the incident happened when 23 senior members of the youth party stayed there in June, according to Expressen.

After a night out partying in Brussels, the guests in one of the rooms occupied by SSU, the youth wing of the Social Democratic Party, left a nasty surprise for the chambermaid. "There were faeces on the carpet, on the toilet door, on the external door, on the chair and on the wall," receptionist Rashid bin Hach told Expressen. The Swedes paid €50 to clean the room, which took two and a half hours.

The Swedish politicians claimed that an animal had defecated in the room, according to hotel staff. This was not an explanation that cut much ice with the chambermaid. "One can see a clear difference," she said. A spokesman for SSU, Peter Skeppström, who was on the trip, admitted he had been told what had happened, adding the group had tried to fix the problem. He said it never emerged who was responsible for the mess. 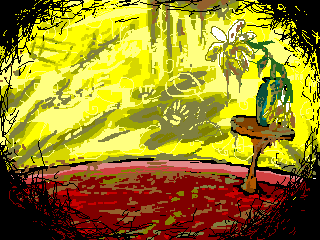 "burritos in brussels", feces on drywall, circa 2007Hard times in Sweden. First their government announces plans for an ill-advised embassy in Second Life. Then they're threatened with sanctions unless they take steps to prevent file-sharing. And now members of the Swedish Social Democrats, one of the most respected and successful political parties in modern European history, have apparently forgotten how to poop. Perhaps the hotel in question was also housing the paraplegic pimps from Denmark's Social Democrats, and they simply ran out of bedpans and toilet paper. Suffice it to say that these are dark days for our Scandinavian brethren.

I don't mean to suggest that America hasn't had its share of sexual/scatological scandals. I'm sure we've all heard the recent revelations about Larry Craig's lavatory lovin' and boyband boss Lou Pearlman's purported pedophilia. But even at his worst, Mark Foley didn't have explosive diarrhea in the congressional chambers. I mean, I thought we had problems with holding elected officials responsible over here. But when your spokesman admits that not only were you incapable of cleaning up after yourself but that you were unable to ascertain who had shit all over the goddamn room I can't imagine it inspires confidence in the constituency.

A Hartlepool man is facing jail after he urinated on a disabled woman who lay dying in the street. The 27-year-old shouted "this is YouTube material" as he degraded Christine Lakinski, 50, who had fallen ill, magistrates heard. Miss Lakinski, who suffered a number of medical conditions, died from natural causes, an inquest found.

Hartlepool magistrates heard how, on 27 July, Miss Lakinski was making her way home with a box of laminate flooring when she fell ill and stumbled into a doorway. Anderson had smoked a cannabis joint and been drinking when he and two friends spotted her. He tried to rouse her by throwing a bucket of water over her, before urinating on her and covering her with shaving foam. The incident was filmed on a mobile phone.

She was later declared dead at the scene, the cause of death being given as pancreatic failure.

Lynne Dalton, prosecuting, said: "Although his actions did not contribute to her death it was appalling behaviour that robbed her of any dignity in the last hours of her life."

After Wednesday's hearing, Miss Lakinski's brother, Mark, said: "We will await the outcome and just hope he gets what he deserves." 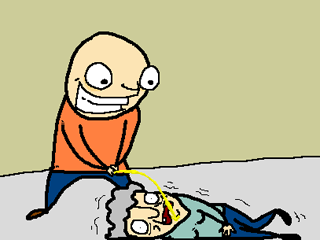 LOOK MA I'M ON THE INTERNETHow do you describe the state of things when peeing on a dying person can be gleefully called "YouTube material"? Awesome, that's how.

For years, video production was the province of professionals, those few enriched souls with the proper equipment and training to record reality. Timeless films were made. Art arose from moving pictures. It was unbearably beautiful.

Thankfully, those days are over. Advances in technology have made webcams and recording software inexpensive and omnipresent, while the Internet provides a platform for dissemination (and oh how I shudder at the etymological implications of using that word in the context of the web.) Before, it would have been impossible to, say, cheaply and easily record a video of your fat self standing shirtless in your bedroom, draw a giant face across your bloated corpse of a stomach, and stuff old potato chips into your navel as your jiggled like a giant moldy pudding pop. But now, such a thing is not only possible, it is a pleasant reality.

Today's frontpage article charts the descent of modern man from cultural giant to beer-swilling slob. In these last few articles, we've seen a major celebrity who knows less about the cosmos than a medieval peasant, future leaders of the Western world too lazy to clean up after themselves and too cheap to pay someone else to do it, and a punk passerby peeing on a dying disabled women for a couple views on YouTube. We are barreling headlong towards a petty, stupid, and ultimately entertaining future, and I'm strangely OK with that.