I'm Pretty Sure this Airbnb is Just a Treehouse 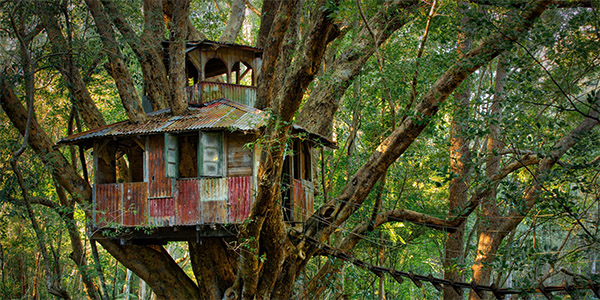 Normally, when people stay at an Airbnb, they prefer to maintain the illusion that the space they rented is wholly theirs, and not littered with the skin cells and fecal matter of strangers. However, I have no choice but to shatter this facade and contact you directly. So why didn't I just leave you a negative comment on the website itself? Well, it shouldn't surprise you to hear that, without any source of power, my iPhone went dead about 10 hours into my stay. Peeling off a massive piece of bark and carving this message into it may hurt my reputation as an Airbnb tenant, but I had to register my complaints while they were still fresh. And while the bark was still fresh and pliable.

Let's get the biggest thing out of the way: I'm pretty sure this Airbnb is just a treehouse. Yes, I did pick up some warning signals, and foolishly chose to ignore them. For instance, I had never heard of a "luxury tree-style loft," but kind of stopped reading after I saw "luxury" adjacent to "$139." Based on the photos you provided, your space appeared to be small, but cozy, with a unique rustic theme that promised to calm my nerves on this grueling business trip.

The fact that I could only access the loft with a rope ladder did raise some questions, but I chalked that up to travel anxiety and decided to unpack and relax. As I heard a storm roll in, I fluffed my pillow and waited for the sound of falling rain to put me to sleep. What happened next was something I never could have predicted. The rain, typically known to remain outside in most cases, began assaulting me through the windows. As I scrambled to shut them, I found no pane or sill to speak of: these "windows" were just holes strategically cut into connected pieces of wood! Also, my pillow was a garbage bag full of leaves.

It was a rude awakening, but I decided to dust myself off, wring out my suit, and make the most of this predicament. After all, I chose your space, not just for the price, but for the many amenities you listed. And "fresh honey on location" was one of them. I'm a man who enjoys a good, thick dollop in his tea every morning, and that's just what I was in the mood for, despite not having any access to hot water. Was I surprised that the "fresh honey" you listed was a euphemism for the large beehive dangling from one of this tree's larger branches? You bet, but I wasn't about to let a few hundred stings get between me and my honey. Was I even more surprised when that beehive turned out to be a wasp nest? You bet.

After the wasp venom worked its way through my body, I decided to plug in my phone and connect with the boys back at the office. A sole extension cord dangling through the window served as my only source of power, so I gave it a little tug and plugged in. Nothing. I traced the cord to its source: the adjacent backyard which featured what I can honestly admit was the most American flags I'd ever seen in 200 square feet--and my brother works in a flag store. Assuming you had worked out some sort of deal with your neighbor, I found the outlet, and, at the same time, a large, violent man in a Harley-Davidson poncho who had some questions for me. I thought I'd be in serious trouble, but after some rough shovings and a mock execution--which I can assure you felt very, very real--I was allowed to both leave and clean my pants with his garden hose.

I shouldn't have to play this card, but I'm a very important person in my organization, and feel I deserve much better treatment than what I currently received. As a businessman, I understand "the art of the deal," but going so far as to win the trust of your fellow man, then proceed to completely deceive him? Frankly, it disgusts me, and this whole experience has made me lose all faith in humanity. You can bet the next time our NAMBLA conference comes to town, I'll be staying somewhere else under an assumed name.