Silencing Alex Jones is a Threat to America's Freedom and Democracy!!!

The internet's favorite rambling, chubby, rabid conspiracy theorist is back in the news again, and not for the right reasons (such as him falling into a toilet and remaining stuck inside for several weeks).

All but one of the major content platforms have banned the American conspiracy theorist Alex Jones, as the companies raced to act in the wake of Apple's decision to remove five podcasts by Jones and his Infowars website.

Facebook unpublished four pages run by Jones for "repeated violations of community standards", the company said on Monday. YouTube terminated Jones's account over him repeatedly appearing in videos despite being subject to a 90-day ban from the website, and Spotify removed the entirety of one of Jones's podcasts for "hate content". 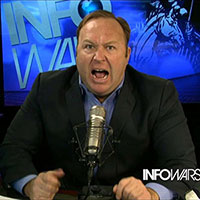 Conservatives are naturally mass-emailing Fox News, begging to appear on their show so they may repeat the phrase "slippery slope" until it cuts to commercial break. The Fox News / conservative rallying cry essentially revolves around Martin Niemöller's famous quote:

For those of you unfamiliar with Alex Jones, he runs this site called "INFOWARS DOT COM," which is dedicated to exposing the lies and secrets the American government DOES NOT WANT YOU TO KNOW, such as: 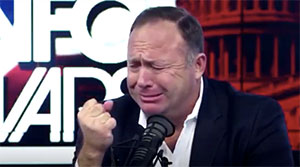 I could go on and on here, since every 10 minutes of every day, Jones somehow manages to squeeze out another 600-paragraph article about how everybody in the government except Donald "Donald" Trump is lying to us for their own nefarious ill-gotten gains. He also hosts a video show that consists entirely of him screaming incoherently while sweating so much that he permanently warps the floorboards.

After years and years of putting up with (and promoting) Jones' shit garbage idiot crap, a few of the tech industry bigwigs got together and said "hey, maybe this person who is objectively the dumbest human being to ever get launched out of a vagina, should not be on our social media platforms." Wow! What a crazy and absolutely revolutionary idea! What brain doctor geniuses at Apple and Facebook were so smart and so good at having a huge IQ that they actually agreed to censor outright insane hate speech?!? Twitter, the one social media site that is perpetually two decades behind comparable sites, naturally has not banned Jones. They are the true shining beacons of free speech, who only ban people for the most severe of Tweets, such as this one: 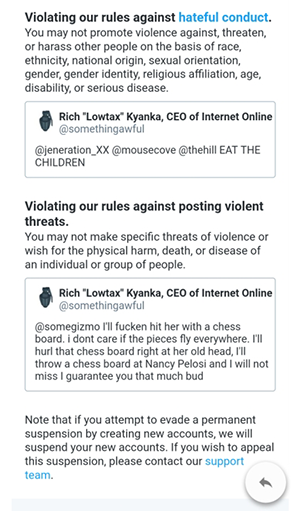 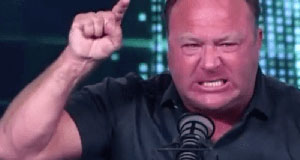 But enough about how Twitter is run by incompetent moron idiot fuckers from Sementopia; Alex Jones is effectively being silenced by major social media sites, just because he says silly things like "Bill Gates is trying to commit genocide" and "the government is controlling the weather" and "the US government did 9/11" and "all Democrats should be murdered." Those are fun goofy little jokes the guy says, no harm intended! Also he's a performer, which means he's not liable for anything he says while "performing" as a sweaty, oafish idiot who lacks the ability to speak and think at the same time! Or at separate times! Or ever!

In reaction to this unfair, unjust persecution of a poor, helpless obese mound of worthless garbage flesh, conservatives have crawled out of the woodwork to relentlessly chants their idiot "slippery slope" warnings, while weakly attempting to distance themselves from Jones himself. They're popping out of their shells to appear on Fox News and rehash the same predictable garbage you'd expect, all along the lines of "while I do not agree with Jones' opinions, I believe we should stand up for free speech at all costs," and "maybe Jones says some harmless, silly things, but if Facebook and Apple start censoring him, then us conservatives will undoubtedly be the next target! And then once they've silenced the conservatives, they'll go after any Republican! And then they'll start breaking into our homes and dropping giant anvils on our heads if we ever say something good about Donald 'Donald Trump' Trump! And then my wife will give birth to a dangerous negro baby."

Of course this line of reasoning lacks any form of reasoning, as the infernal "slippery slope" cliche can easily be applied to every fucking thing in the universe that ever happens anywhere. If they put people in jail for murder, then what's next? Putting people in jail for enjoying delicious pastries? Imprisoning people for simply existing? WHEN WILL THE MADNESS END? 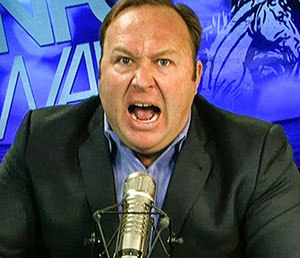 Decades ago, the common thought regarding internet moderation was neatly summed up by "do not feed the trolls." If somebody was intentionally attempting to rile up a community by posting inflammatory material designed solely to illicit a negative response, then they were ignored and eventually gave up. That was the internet back in 2000. Unfortunately, in the past 18 years, online culture has mutated into a disgusting, twisted mass of toxic, burning trash that not only seeps into every corner, but amplifies itself by allowing easy access to the braindead shitfuckers who can simply pick up their iPhone and type "your gay im gonna rape and kill your mom irl lol" followed by seven hundred emojis. The worst thing to ever happen to the internet was allowing the public to use it.

These days, it absolutely does not matter if you do or do not feed the trolls, as the internet has morphed into a gigantic amplifier for the fuckheads who screech the loudest. You can go onto social media and say the most dumb, evil shit possible, and you will get hundreds of people who sincerely support you and believe the exact same thing. We live in a culture where "intelligence" is solely associated with "self-righteous indignation," and those who scream the loudest get the most attention and followers.

So how do we address career trolls like Alex Jones, who prey on the ignorant and rake in millions of dollars despite the fact that instead of having a brain inside his skull, he possesses a very small, non-functioning cotton candy machine staffed by several somewhat larger circus clowns? Well here's my solution: give me the fucking Infinity Gauntlet and let me use it to eradicate 50% of the internet. Then I'll use it again, and again, and again until there's maybe six people total remaining. Please do not report this article to my ISP for death threats and hateful content.

And I'll pay good money if an actual living, breathing human being who works at Twitter can seriously email me and explain why my accounts were deemed more dangerous than Alex "Fucking" Jones. As far as I can tell, no real people work in any positions at Twitter, and it's run entirely by form emails. Please Twitter, email me; prove me wrong.