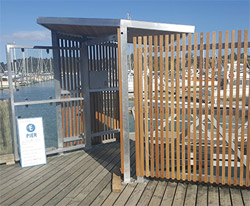 This gate is hopeless! It couldn't keep out a curious eight-year-old. Or keep in a fourteen-year-old, as yacht-owner Johnny Epstein knows when Valentina Nowak escaped from his 600-foot yacht Age Ain't Nothing But A Number and scaled the supposedly no-climb wooden fences to run to the police. The San Codicia police promptly returned Miss Nowak to Mr. Epstein so he could continue his cruise to his private island with various other people who will sue if their names are mentioned. Climb the fence yourself and you can get a good look at Betsy DeVos's 350-foot yacht Don't Tread On My Money.

#9 The Gate at White Burroughs Yacht Club in Georgia

The marina of this yacht club is secured only by the club's main gate! This makes it one of the easiest clubs for you to gain access to the various yachts to look at and enjoy the look of them and not vandalize or destroy them or cause them to sink. You can climb over the gate, but beware of the mine fielded on the greens. Try talking to the landscapers, who keep a map of safe paths through the grass. Make your way to the marina and you can have a look at Betsy Devos's smallest yacht, the 270-foot Rounding Error.

#8 The Gate at Galt Gulf in South Carolina 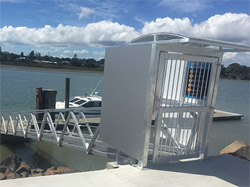 This exclusive marina is kept secret, although the housekeepers and mechanics in the private community of Galt Gulf can probably point you in the right direction. The gate itself is nothing too fancy, just an electrified gate with a bullet-proof locking mechanism. You can use thrown lengths of copper wire to short circuit the electricity and disengage the lock. Then you can enter and have a closer look at Betsy DeVos's 400-foot yacht Spirit of the Lich.

#7 The Gate at Pharaoh Beach in Florida 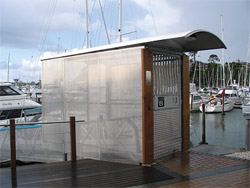 This covered gate features swim-fences, biometric locks, and 24/7 security. So skip the gate and take the sewer! Because Pharoah Beach is a private community, they dump their raw sewage straight from the Pyramid Club on the premises into Pharaoh Bay, allowing you to swim through the filth of the wealthy and out to have a closer look at Betsy DeVos's massive, 800-foot yacht Tomb of the American Dream.

#6 The Gate at Ritzenbacher Shores in the Hamptons 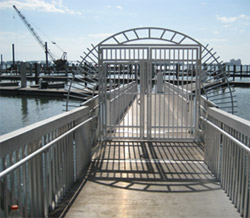 Don't let all the spikes around this gate fool you into thinking the gate is dangerous. The real dangers are the six Dobermanns loose at the marina and trained to eat the face and genitals of anyone who does not shake a velvet sack full of gold coins at them. We believe any coins will work, but we have not tested it, so watch out. If you can get past the dogs you can get to Betsy DeVos's personal favorite yacht, the 488-foot Guillotine Dodger and have a good long look. 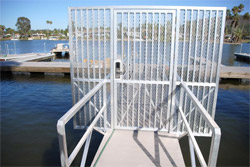 This reinforced steel gate uses a simple key lock that could be picked with standard lockpicks. The marina is otherwise unprotected. However, the location of Slavery Island has been scrubbed from Google Maps and marine navigation systems. It is operated by the Guild of Slavery, a global fraternity that welcomes all "descended from slave owners or who might own slaves if given the opportunity again" and lobbies governments to weaken payday lending rules until slavery can be fully restored. It's going to take the son or daughter of a former plantation owner to get an up-close look at the DeVos family's 550-foot yacht Amistad, But Good.

#4 The Gate at Illuminatus Springs Marina in Virginia 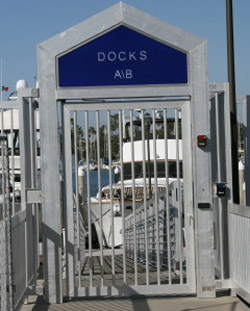 This 9-digit numeric coded, bomb-proofed gate might deter amateurs, but anyone with the proper hacking tools can open up the marina with a few minutes of privacy. Beware of any owls you see as they tend to be disguised drones and capable of calling in others for Mossad-style AI swarm attacks using micro-explosives. The DeVos family's 600-foot yacht Famine Rider is moored here. The yacht, nicknamed "Graveyard of the Will," is best known for its use as a black site by private intelligence contractors working in Yemen. Go on, get a good look at it, just watch out for armed men with black bags.

#3 The Gate at Cornelius Vanderwolf Memorial Marina in New York 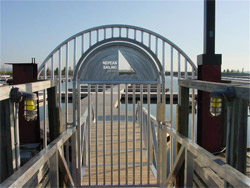 Tedious security makes getting near the yachts at this marina a chore. To enter the grounds at the marina you will be asked to show the white-gloved yacht concierge that you have a bill of 100,000 dollar or greater denomination in your wallet. If you do not carry cash you can show him a Swiss account with proof that you have at least one Rembrandt or 6 gold bars looted by Hermann Goering in your vault. After that you will be asked to identify a soda by taste, which you must guess incorrectly as "Cogacolas??" and then use three different golden keys to pass through three different gates. Finally, you will be able to approach and stare at the moorings for the DeVos family's 675-foot yacht Top of the Pyramid. Get a good look at this beauty, it is the only yacht in North America with a car race track below decks. 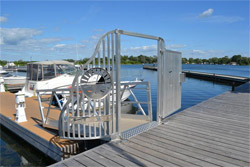 Do not underestimate the security here. The tawny enclave of Fort Nopoors in Florida was originally a fort built by wealthy merchant August Nopoors in the 18th century to trade the ivory tusks of the unusually gentle and intelligent Florida elephant. By 1815 the Florida elephant had been eradicated and Nopoors turned to the triangular trade, which was trading triangles embedded with anthrax to the Native American tribes in the region. Perhaps in a tribute to August Nopoors, the marina gate remains open day and night, but a concealed Prince family sniper team will shoot anyone not wearing a transponder bracelet. The team uses a rotating series of shooting positions, but a determined person might be able to spot all their locations, note the position of their defensive claymore mines, and eliminate the sniper team before entering the marina where Betsy DeVos keeps her 550-foot yacht Private School of the Sea. Have a good look!

#1 The Gate at Al Avarici Marina in Dubai 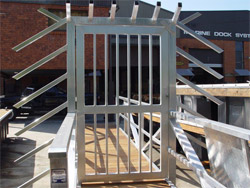 The most secure DeVos family yacht. This extreme luxury marina in Dubai plays host to both yachts of the CEO of Lucadra, the company that makes the machine that takes blood from children and injects it into Peter Thiel, the 400-foot yacht of the Saudi Prince who is developing a golf course on the Galapagos Islands that will cause over 900 species to go extinct, and the DeVos family's 375-foot yacht Hail Mammon. The marina gate consists of a tungsten core deterrent gate system, touch censors, and a biometric lock. Unfortunately, this type of lock, the C543, requires the warmth of circulating blood in hand and eye readings, so you cannot just take the necessary credentials from a member of the DeVos family. However, the marina's submerged outer gate system, meant to electrocute dolphins trying to enter the marina, could be vulnerable to a double fireship approach, using one explosive boat to destroy the gate and another to enter the marina for a closer look at Hail Mammon. Alternately, a member of the crew that has not been implanted with the DeVos family's cortical bombs could go below decks and really have a tour of the various bilge valves and how to open and close them and make the yacht sink.