Speaking of anime, Jerry, I find it funny that these politicians talk about reforming healthcare, while neglecting some of its most basic human needs. I'm being deprived of anime here. How am I to recuperate if my mind is not allowed to soar and contemplate the myriad questions posed by any good work of Japanese animation, from the fantastic futurism of Neon Genesis Evangelion to the more conventional human drama of Yu Yu Hakusho? Without mental stimulation, the body wanes. My body would not be the temple it is today without anime to keep me focused and in shape. 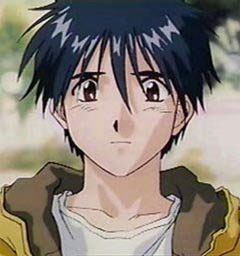 With my romantic luck, I feel like a Kosuke Fujishima character come to life!When this is all over, Jerry, I'm going to finally do all those things I've been putting off. I'm going to propose to FallenStarFox, the girl whom I've been corresponding with on IRC for some time. Unlike you, Jerry, she's not two-dimensional. True, she identifies more with two-dimensional animal representations than with humans, but she remains as complex a woman as any. Oh, this is the real deal for sure, Jerry. I feel like Keiichi Morisato being blessed with a personal goddess. If you play your cards right, Jerry, you may even get to be my best man.

It may surprise you, Jerry, that just like you I also appreciate sports. The difference is that while you prefer to watch men shuffle a ball around a field in a glorified game of keep away, I prefer a pursuit that is as cerebral as it is physical. That's right, Jerry, I'm talking about live action role-playing.

I know you made fun of it before, joking that the necromancer brought every part of me back from the dead except my groin. Very funny, Jerry. That's not even how necromancy works. Sometimes I don't think you realize just how much you embarrass yourself. There are rules to these things. You can't just make this stuff up and expect it to fly.

When this procedure is over with and I'm done with rehab, I'm going to make my triumphant return to the realm of battle. It's going to be glorious, Jerry. My thighs won't chafe so horribly and cause the dead tissue to flake off and release puss. I'll finally be able to don that armor again and run as free as the wind, vanquishing wizards of old and smiting the Orc Hoards with my claymore.

What's that, Jerry? You're jealous of my upcoming athleticism and companionship? I'm not as shallow as you, Jerry, and will of course welcome you into my world should you open your heart to the possibilities.

Listen, Jerry. It's almost time for the operation. I don't know if I'm going to survive this. If I die, I want you to have my anime. I know you're probably laughing and thinking about throwing my entire collection in the garbage, but don't. There are whole worlds in those animes, Jerry. They will teach you things about yourself you never knew. Please, Jerry, take good care of them if I don't make it.

We've had an odd relationship, Jerry. Me the intellectual and you the brute-an unlikely duo we certainly make! We have our differences, but I know that deep down inside we are comrades to the end. I just hope this isn't the end... Jerry.