Anime, Myself, and I 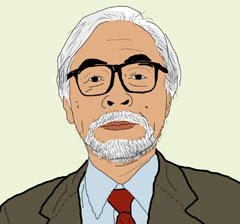 It's like I don't even know you anymore. You know what, Jerry? You win. Between you and her, my love of anime is over. It's like poison to me now. What once lifted my spirit up and gave me the courage to dream now makes me sick to my stomach. Even the profound works of Miyazaki fill me with blind rage. Where once I found deep inner peace listening to the orchestrations of Nobuo Uematsu, the Mozart of the 21st century, I now feel emptiness. I don't know what to say, Jerry. It's like you took the color out of the rainbow.

As you know, I have been saving for two years to visit Japan, and while I was mere months from making that dream a reality, I am now further than ever. But that's okay, Jerry, since I don't want to visit Tokyo anymore. I have taken that $300 in savings and purchased enough Pop Tarts and Easy Mac to keep me going for the next month. I don't ever have to leave my room, except maybe to go to the bathroom and get some water for my Easy Mac.

Would that make you happy, Jerry? To never see me again? No, it wouldn't. You don't have to admit it, Jerry. I know it's not easy for you either. But after all we've been through, don't you think it's time we accept the truth? Jerry, with your dad and my mom on the cusp of marriage, you and I are destined to unite forever as brothers.

Jerry, I've been reading some wiki entries on psychology and I think I'm finally starting to understand our situation. The dynamics are obviously complicated, but if you'd like me to explain it all to you in simple terms one of these days, I'd be happy to. The point is, Jerry, I know why you sabotage my relationships: You are worried I will spend less time with you and you are jealous of the success and popularity that often comes so natural to me.

And that's why I've decided to take the high road. I can't promise that I have forgiven you completely, but I'm giving you the chance to redeem yourself. I'm going to really make an effort to be not just your friend, not just your roommate, but your brother, Jerry.

So when I heard you talking to your friend about hitting up the club this weekend, I want you to know that I'll be coming along, Jerry. I'll be there by your side taking an interest in your life instead of dismissing it outright. I've retreated into a world of Japanese animation long enough. I'm ready to go out and live the good life with you and your friends.

Believe it or not, Jerry, there may come a day when you and I are sitting side by side on the couch enjoying the very same TV program. Imagine that, Jerry. Not even a mind as ingenious as Morio Asaka could have dreamt up such a fantastical scenario. What do you say, Jerry? Ready to leave the past in the past and take on the world with... your brother?