I'm On To You, Lady In This 15-Year-Old Episode Of Antiques Roadshow

Extremely Important Note: This article originally involved a ceramic pig. It was written last Friday, before the British PM was accused of cramming his groin thing in the mouth of a dead pig. In light of this breaking story, I decided to distance today's article from current events by editing the ceramic pig out of the story and replacing it with an entirely different object.

You thought you could get away with it, didn't you? Bringing your porcelain pig to an Antiques Roadshow taping fifteen years ago. Peddling your deceit to the hosts and camera crew. You were good. But I'm better.

When the appraiser asked where you got the pig, you claimed to have picked it up from a garage sale for just a dollar. A likely story. You thought you were laying the groundwork to turn your unassuming pig into the find of the century. In truth, you were only raising red flags. 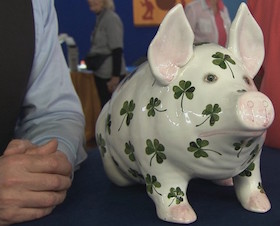 Next you spun an involved tale linking the pig to Thomas Jefferson. According to you, the man running the garage sale was the great grandson of a woodworker who was called out to the White House late one night to fix a broken horse box. In exchange for the repair, you claimed that Jefferson - who had no cash on hand at the time - gave man this porcelain pig, which his descendant in turn sold to you for one dollar. Uh huh. Sure. This story doesn't check out. What are the chances that humans discovered both porcelain and pigs before the early 1800s?

When the appraiser lifted the pig and pointed out the signatures on the bottom (Louis Comfort Tiffany and Peter Carl Faberge) you feigned surprise. As if you had never looked under there as any sane person would, to check for an appendectomy scar.

"How much do you think something like this would be worth?", the appraiser asked. You feigned ignorance, saying you had never had it appraised or even set aside a few minutes to do some basic research online.

Then you pretended to be surprised by the pig's estimated auction value of $15,000. According to you it didn't seem worth much at all, this item that you brought to a television show and stood in line with for hours.

As the segment came to a close you rattled off your rehearsed quip, "Not bad for a dollar!" This moment was your undoing. I looped this segment countless times, running the video through zoom enhancement software and analyzing the vocal characteristics. The results were conclusive.

Lady, you paid more than a dollar for that pig. You embellished its provenance. You knew who made it and what it was worth.

Now, in 2015, the net is closing in. I can only imagine that this article will be published just as you are about to make your escape, the airplane's captain turning off the engines and opening the door for a team of marshals as you sink into your chair and hold a newspaper up to cover the portion of your face not already disguised by a pair of oversized sunglasses and floppy sun hat.

I'd go even deeper, but a contestant on Top Chef is claiming that this is the first time he, a professional chef, has ever attempted to make the dish he's presenting to the judges.