Two weeks ago I explored the first half of the Final Fantasy Twelvogy, but this update is very, very different. In the spirit of this Thanksgiving holiday (Kickboxing Day to our friends up north), please enjoy me as I explore the second half of the Final Fantasy Twelvogy. So relax, try not to think of systematic genocide, and once again take a trip down memory lane by remembering games you undoubtedly masturbated to. Take it from one Something Awful fan: “Your latest update was a real piece of shit.” 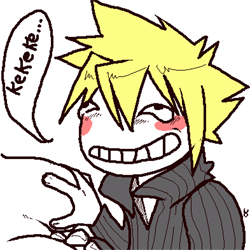 Upon typing the words “Final Fantasy VII,” I can feel the hot, wet stink of internet sewage mouth-breathing down my neck. You see, Final Fantasy VII is undoubtedly the most beloved Final Fantasy game in existence, both on and off the Internet. While fans of Shakespeare prefer Hamlet or Macbeth, Final Fantasy fans are barely literate at basic functional levels, so this analogy is flawed. The mandatory task of reading – something new to most gamers – was overlooked thanks to about 8 seconds of bouncing polygonal tits – perhaps the game’s biggest selling point. Casual gamers looked at FFVII’s incredible CGI graphics, stated “No longer will I believe Donkey Kong Country is the culmination of all technology!” and, after purchasing the game, proceeded to never buy another Final Fantasy title again. You can’t really blame them; after all, these people weren’t familiar with the “tell my dudes to attack but my dudes don’t attack right away” style of gameplay most commonly referred to as “an RPG.” Those whose first RPG was FFVII, and who understood such concepts as “You need a fucking memory card,” took a liking to this “new” kind of game and became Square’s most catered-to fanbase. For this I hate them.

With the amount of data available on three CDs at their disposal, Square decided to make the plot of Final Fantasy VII more complicated than any of their other games up to that point. Hot on the heels of the Neon Genesis Evangelion - a Japanese animated series about a crazy animation director working out his mommy issues through Christian imagery – the producers of Final Fantasy VII decided to give their own game this same sort of disjointed and bewildering storytelling. Many American gamers blame a rough translation for their confusion at the story, but with the amount of fan fiction devoted to Final Fantasy VII on the internet (so much that Google does not have the power to catalog it) apparently multiplying by its own will, someone has to know enough about the game’s plot to explain why Yuffie would want to rape Harry Potter. 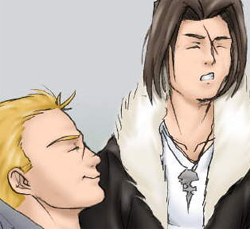 Final Fantasy VIII marked the first time Square took a look at their fanbase and decided to create a main character that was just like them. Brooding, antisocial, and facially scarred (but with battle wounds instead of cystic acne) Squall is barely discernable from the average GameStop troll (the morbidly underweight variety). And Squall is constantly rewarded for being a jerk, whether it’s saying “...” to the hot freedom fighter who fires her border collie at monsters or saying “...” to his hot instructor who wants to teach him how to be a man, or possibly algebra. These are people the average nerd is unlikely to meet, but Squall still provides a nice avatar because he’s afraid of girls – just like them! And with Final Fantasy VIII’s 1999 release date, its encouragement of the mysterious loner lifestyle probably caused hundreds of gamers to be confused for future Columbiners from their replies of “...” whenever lunchroom monitors asked them, “Didn’t we tell you could only wear your The Crow makeup on Halloween?”

Final Fantasy VIII is unfortunately part of a larger wave of pop culture directly inspired by Titanic, a movie which I can’t make any jokes about because every possibility has already been written. From 1997 – 2000, every single fucking television show thought, “Wouldn’t it be a hoot to see our characters in a Titanic scenario?” Thankfully, these jokes have become stale relics of humor past, which is why you can still see Titanic parodies on Robot Chicken. Final Fantasy VIII takes a slightly different approach to sinking boat themes with “Eyes on Me,” its very own love ballad. This would not be the last time an Asian singer would write a song cribbed from Celine Dion with awkward English lyrics; warbled nonsense has since become a tradition of the franchise. These songs most often play in the game during scenes so mortifying that witnesses will most often disown the gamer playing instead of asking the expected question, “What in god’s name is this pile of rancid smegma?”

In 2000, Final Fantasy VIII won the Robert Jordan Award for Most Uniquely Bad Use of Amnesia as a Plot Device in a Work of Fiction.