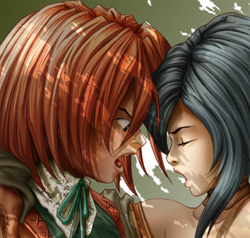 Most people – even Final Fantasy fans, who hardly rank as high as “people” – completely disregard Final Fantasy IX. If you look at the events of the gaming world at the time of FFIX’s release, it’s easy to see why. Much as they are now, back in the year 2000 people with questionable tastes were murdering each other over the new Playstation, not realizing that their hundreds of dollars were going towards a gameless explosion device that had a lifespan of up to nine months. And for what? Just because the PS2 could play DVDs? Truly, an innocent pre-September 11th mindset. Today, things are slightly different; the new Playstation gives us Blu-Ray and Talladega Nights; a sure sign that we live in an age of terror. But back then, when Fantavision and snowboarding got old, gamers had to turn to other sources to have fun. In this scenario, the Dreamcast was actually not worthless.

This is where Final Fantasy IX comes in. More often known as “lol that Final Fantasy with the Gelflings and the monkey boy” by mental cripples on Internet message boards, Final Fantasy IX was one of Square’s final attempts to give dignity to the series before the reign of half-naked manboys took hold. And, as expected, Final Fantasy IX was nearly impossible to masturbate to. Even the most perverted and septic human beings couldn’t produce boner one over the game, causing disappointing sales worldwide. But if anyone got boners (I’m sorry), it was old-school Final Fantasy fans, who were brought back to a simpler time, when characters actually had different abilities; a completely baffling notion to some. Speaking of characters, Final Fantasy IX had an unforgettable cast of genuinely appealing characters: Vivi, the lovable black mage, Stei- No wait, he looked like Buzz Lightyear. And then there was that guy who looked like Sgt. Floyd Pepper from The Muppet Show. Who the fuck used him? No, wait... I can do this. Okay, there was this thing that ate frogs? No, fuck that thing. I hate it.

With Final Fantasy IX, Square launched the PlayOnline service, which used the ever-expanding Internet to make gamers use secret codes to find information that should have been in the strategy guide they paid 10 dollars for. Later in the year, several Circuit City stores – taking an idea from Square - were shut down by the Supreme Court for selling the URL to GameFAQs for only $5 with every video game purchase.

Final Fantasy IX is the best game ever. 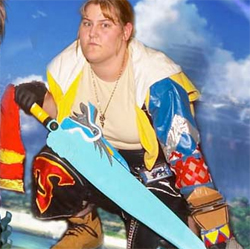 The first Final Fantasy of the PS2 generation, Final Fantasy X is also the first RPG that Square forced Japanese pop culture into, very similar to the forcing of a grapefruit into an adult anus. And with Final Fantasy X, it was just as painful. Japanese pop culture is like a funhouse mirror version of American pop culture, where pop singers have 15-minute careers and act like giant infants who have balance problems; but they’re 14, so it’s okay to have sex with them. This sensibility was added to the game by character designer Tetsuya Nomura, who was later made a director in what could have only been a Russian Roulette-based business decision. The fashion of Final Fantasy characters was always impractical, but never retarded; Nomura sought to change this. “Belts!” “Zippers!” “Chains!” “Half-Clothes!” Nomura would scream these words until his throat was raw and bloody, until he could taste the hate that fuels all of his artwork. He would only stop when the darkest bile from his innermost organs was brought up – brought up to hate. This work resulted in the main character of FFX, Tidus, who is a superghost or a dreamfart or not real or something stupid like that. You should be happy that I spoiled the entire game for you, because now you don’t have to play FFX or its sequel, Final Fantasy X-2: Grown Women Act Like Pre-Schoolers and Wear Very Little (Sponsored by Jergen’s). Tragically, the FFX sequel does not deserve the half-sentence I gave it. Or the previous one, alerting you to this fact.

As part of the new generation of PS2 role-playing games, Final Fantasy X sought to bring more action to the stale RPG genre by adding content that was a little more interactive; thus, Blitzball was created, blurring the lines between “RPG” and “sports game,” and also between “crap” and “shit.” Blitzball is a minigame forced onto players that plays much like an underwater game of soccer. It’s also just as fun as an underwater game of soccer, but still much better than NBA Live 2007. Blitzball wasn’t enough, though; there had to be more ways to ruin a Final Fantasy game! Voice acting was added for this purpose, most notably shown in what is usually called “the laughing scene:” a litmus test for people who still have some sense of shame. Truly a sign of what was to come, the “laughing scene” is actually given the Internet defense of “But it’s supposed to be bad!” Thankfully this scene happens very early in the game, so anyone who values their dignity will know that it would be a better idea to do something more constructive, like trade the game in for 50 cents or attempt to feel joy once again.