My hands are shaking as I stumble into Blippy's Tavern. I'm not sure if it's alcohol withdrawals or a mild seizure from the Astro Fighter cabinet, but the migraine throbbing in my skull like the Contra jungle theme tells me it's probably the former.

I lurch toward the bar through a crowd of thirtysomethings wearing retro gaming t-shirts and glasses with frames that could withstand a nuclear blast. They give me plenty of room, the way people tend to when you're an out-of-work pixel artist who sweats scotch and G Fuel. Unlike them, I'm not here to celebrate my unboxing channel clearing the 10k subscriber hurdle, or to practice for a Spy Hunter tournament that doesn't allow diapers. I haven't had anything to celebrate since last year's Steam sale, and the only thing I'm hunting for is a stiff drink. If I don't get some booze in my system soon I'll have a fever, and I don't mean the Pac-Man kind.

I find a seat at the bar and order a hard cider, but Mike the bartender shakes his head.

Mentioning the death of Lorenzo Music always puts Mike in a sentimental mood, so he gives me one on the house. I sip it until my head stops pounding, then look around the room. Blippy's looks pretty much like the last few arcade bars I've been thrown out of: obscure, barely functional cabinets, speakers blasting Quiet Riot from someone's iPod, posters for '80s movies they probably didn't sell posters for until a decade after they came out. The type of place you might come to hook up with a Chun-Li cosplayer, to unironically do the Batdance, or, if you're like me, because you have nowhere else to go.

I'm about to ask Mike if he knows where I can score some cheap kratom when I see her. She sits alone at the end of the bar, her wan, heart-shaped face edged in flickering light from a Punch Mania machine. She has chestnut hair and azure eyes so glazed they could be a mirrored surface effect in a '90s FPS. She nurses a margarita while staring at something a thousand miles away, something I've glimpsed myself on nights like this when the deviantart commission money is gone and I'm bumming around some third-rate arcade dive, desperate enough to sip someone's beer when they're not looking, even though I have a gluten allergy, or pull a muscle groping for dropped quarters under a claw game, just another lost soul optimizing its speedrun of life. 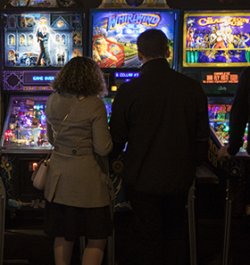 She frowns and hands me her portable charger. "Is this where you ask what a nice girl like me is doing in a place like this?"

"It's not such a bad place. At least they have Addams Family Pinball."

"Yeah, but no BurgerTime."

"That game is a joke with a few basic strats."

She shrugs. "I like the premise. Working a frantic, hellish job that eventually kills you. And they say video games have no basis in reality."

"Reality," I nod. "Got a strat for that too." I chug the rest of my drink, trying not to cough when most of it goes down my windpipe.

We discuss Data East games for a few more minutes, then get another round of drinks and head to that back part of the bar with the couch and Sega Genesis for some co-op Gunstar Heroes. She tells me her name is Melisma. She does tech support for Blizzard and spends her free time writing a novel about a nihilistic blogger called Less Than Zero Comments.

"You remind me of my last boyfriend, Aiden," she says. "He had a crude, sarcastic attitude and always died on the mine level."

"You have to game over a few times before you can really live," I reply.

She gives me a quizzical look. "You know, actually I think you remind me of the guy I dated before Aiden. He lived with his parents and got MRSA from mainlining Rockstar Energy."

She smirks. "I don't think you've ever done a good thing in your life. Except maybe choosing that Mario-themed sweater."

"That's funny," I say, "because a lot of women tell me I'm like an old sweater: always pilled up and ugly as hell but acceptable on nights you just want to stay home and binge watch Stranger Things."

Our eyes meet and there's an awkward silence that in a Michael Cera movie would mean we're going to kiss, so we do. She tastes like the ink on a faded webcomic printout taped to a cubicle, the back alleys of west Bushwick, and a hundred lonely nights seeking inspiration at the bottom of a Ramune bottle.

Someone taps me on the shoulder.

"Hey fuckface, you still owe me $20 from that beating I gave you last week."

It's Jake, one of Blippys' part-time bouncers. In addition to looking like Axel Stone, my least favorite Streets of Rage character, he's a total loudmouth with zero appreciation for Showa anime. We're always getting into fights, usually on the Tekken machine in the back room. Last week I bet him he couldn't K.O. me with Michelle. I lost, but only because I shorted out my controls when I spilled my paloma.

I take a long drag on my e-cig and blow a Mountain Dew flavored vape cloud in Jake's direction. "Hey Jake, anyone ever tell you you have a great face for podcasts?"

"You're pretty clever for someone who needed a Cliff's Notes for Ready Player One," he snorts.

"Hey, I can talk literature. For instance, the novel has been called a loose, baggy monster. But then, so has your mom."

Jake stares at me.

"Who sucks at Fortnite, by the way." 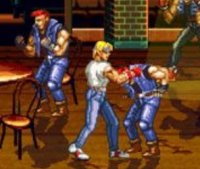 "That's it!" He grabs me by my sweater collar, which is ergonomic for gripping because it's a V-neck. "It's time to kick ass and chew bubble gum, and I'm all out of gum, except for that vintage Bubble Tape I bought on ebay to remind myself I had an awesome childhood!"

I try to throw the first punch, but my reflexes aren't what they were when I pulled that near-record RTA of Sonic 3D Blast. The next thing I know Jake's smashing a bottle of Blippys' signature craft beer, Galager, against my face. The gluten burns in my eyes like pepper spray and I collapse on the floor, sobbing harder than I did at the ending of Spirited Away.

"Why don't you drop that zero and get with the hero?" Jake says to Melisma. It's unclear whether he's ironically quoting Cool as Ice or ironically aping people who ironically quote bad movies, but she doesn't seem to care. Still wheezing on the floor, I watch her leave the bar with Jake, her pale, haunted face receding like a mode 7 graphic into the night.

"You ought to be more careful," Mike says as he helps me to my feet. "Keep this up and you'll be dead at 40. And not from playing that cursed arcade game with the smiley face that gives people heart attacks."

I ask Mike for another drink but he says I've had enough, so I steal his Tesla and crash it through the window of a Gamestop on the way home.