Mere hours ago President Barack Obama delivered his State of the Union Address, an impassioned appeal to the American people calling for a new age of innovation and greatness.

I had the great privilege of sitting behind the president during the address, and felt the power of his words. I admit, I was a bit distracted at times. If you saw me smiling early on, it's because I just couldn't stop thinking about that Jalapeno Smokehouse Bacon Burger they've got at Chili's. I've had my eye on that son of a gun all week. 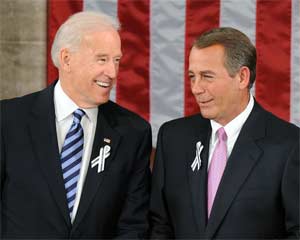 I might have gotten a little gassy during the second half, which is probably why I looked so serious all of a sudden. I was concentrating hard on not letting one out, because I wasn't sure if I was miked or not. After I realized Boehner wasn't holding back, I let it all out and was able to relax and enjoy the speech.

Shouldn't have had those nachos earlier in the day, but I was just starting season 4 of the X-Files and wanted to do it right. We're talking a mountain of chips, a big can of nacho cheese from Costco, two pounds of ground beef, salsa and enough sour cream and guacamole to fill a bathtub.

President Obama did something that seems to happen only once in a generation-- the call for ordinary Americans to achieve something extraordinary. What Kennedy achieved with the Space Race, Barack hopes to achieve with clean energy and technologies yet to be invented.

For America to become a leader in these technologies, we need an educated, motivated and working population. Together we can make America the center of innovation, a leader the world over in green technology, scientific advances, and -- God help us -- undisputed purveyor of the best damn burgers for generations to come.

I was recently called to serve my country in another way: As the member of a jury. Unfortunately, I was not selected to participate, even though I practically begged for them to put me on the team. The opportunity to spend an indefinite amount of time in close quarters with eleven other jurors really gets my juices flowing. I bet at least half would be X-Files fans, and the other half by the time we reach verdict.

Speaking of the X-Files, I'd be a lot further into the series of Barack hadn't forced me to sit through the first few episodes of "Quantum Leap" with him. He was convinced I'd love it and that it was right up my alley. After what seemed like days locked in the Oval Office watching that horrible thing, I finally convinced him to take a break and finish writing his speech. 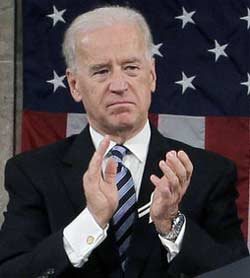 The president and I don't always see eye to eye, and we've been known to butt heads on occasion. This is one of those times. Barack wants me to be his Al. I'd much rather be his Mulder. He can have his Quantum Leap, but it's no X-Files.

I think Barack felt bad, because shortly after that incident he gave me an X-Files t-shirt as a gift. The shirt's a size XXL, so it obviously doesn't fit. I still love the heck out of it, so I'm thinking of having it made into a quilt or pillow, or maybe having the juicy bits sewn on the back of my jacket. I think it would look just terrific.

What Barack did tonight was write the first sentence in the next chapter of the American story. It's up to all of us to determine where that story goes. It could take a dark turn like the X-Files season 4 opener "Herrenvolk," with its mixture of alien bounty hunters, reckless cloning and shadowy Syndicate machinations. If it were to take a dark, X-Files-like turn, you can bet there will be those of us who stand up and fight against the conspirators.

But this is a country of good, and I know the next chapter will be one of progress and hope, of heroes and breakthroughs. Like Barack, I fully believe that the next great wave of innovation will come from hard-working American citizens, and not clandestine agents cannibalizing alien technologies they barely understand.

The future is ours to win, and we're off to a great start.