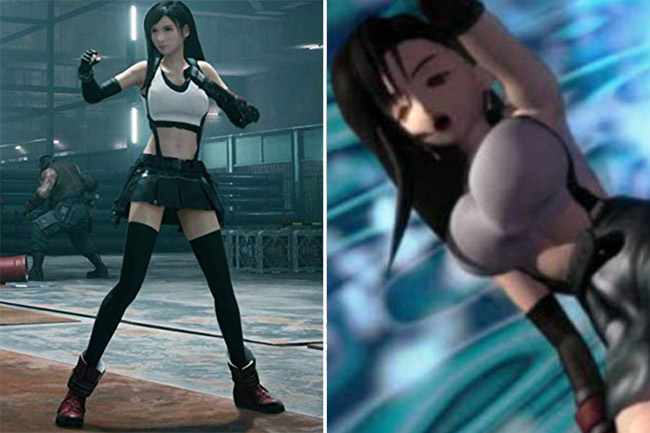 The Nintendo remake of the classic JRPG Final Fantasy 7 is based on the original game developed by Shigeru Miyamoto and is meant to update the graphics and gameplay of the 1990s title for the Nintendo 64 to modern 4K standards. However, when Nintendo debuted a new trailer for the game at E3, fans were dismayed to find something missing: approximately 500ccs of content from fan-favorite Tifa's large wobbly breasts. This game presents small or medium breasts as normal and even good, where they merely have a different way of being, and mocks Miyamoto's vision in the following ways:

1. Tifa was intended as a huge breasted character. This is part of her plot.

2. She wears a tank top and NO bra in the classic game causing her breasts to fly around like two ferrets trying to escape a laundry bag. This is critical character development and factors into many animated sequences of the original Nintendo game.

3. Medium busted Tifa is a sporty character and a tough fighter and this is insulting to women with enormous extremely sexy breasts because it implies they cannot be tough fighters. SEXIST!

4. Many big-breasted girls looked up to Tifa as an icon and now she is taken away from these girls who will have no role model. Once again, extremely sexist from Nintendo.
5. So-called "sports bra" under her tank top. This is not her equipment and is political correctness and is similar to 21st century foot binding. Huge hooters wildly flapping around are natural and actually sports are better because of them and we respect women more.

In the end, this is a denial of Tifa's breast qualities and a rejection of the natural law of big baps, that a medium or small sized bust is good and huge whirling jugs are immoral and not good for fighting. This is another step to make sexy curvy anime babes into lame feminist stick girls. We must show our rejection. Please sign my petition, telling Nintendo that we will not stand silent as they destroy the anime sexy curvy women we still treasure in our hearts.


If Nintendo does not listen, I will be starting a crowd funding campaign to remake the remake of FF7 with the gigantic breasts that Tifa deserves.