This is the Moment of Truth 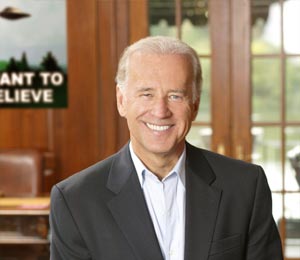 It's not exaggeration when I say a moment of truth is fast approaching. An important journey that began some years ago is reaching a decisive point. I don't know how it's going to turn out, but I know one thing: I'm deeply optimistic.

I'm referring to the final episode of my favorite TV program, the X-Files. I had no idea what to expect some years ago when I inserted the first DVD and pressed the play button, but it's been magic ever since. Mulder and Scully have seen me through some difficult times and served as a strong moral compass during tough challenges at home and from abroad.

When it's all said and done, I'll have a lot to look back on, and a lot of time to fill. The President still insists I watch The Wire, but I don't like how pushy he is about that show.

I'm not sure yet when I will have the chance to watch the final episode. The President had the Secret Service confiscate my DVDs. He said I'll get them back once I win the debate against the Ryan boy.

Let me tell you about this debate. The choice voters face this election has never been more critical. It's a choice between going forward or falling backward into the same failed policies that got us into this mess in the first place. Those differences will be on display during the debate.

We've seen guys like Paul Ryan before. Mulder dealt with his own Paul Ryan in the form of Alex Krycek, and he was as treacherous as they come. You can't trust a guy like that one way or another. And with Mitt Romney, his policies change so much he might as well be one of the alien shape shifters that provided the core to so many great mythology episodes.

Folks, let's be clear: a Romney-Ryan administration would return us to the type of bureaucracy that hampered the actions of Agents Mulder and Scully, and sought to keep the truth buried. We're so close to seeing that truth come to light, it would be foolish to turn back now.

The American people deserve better. I'm talking about folks like Pete Loam of Dayton, Ohio who works hard and sacrifices every day to provide not just for his wife and daughters, but for the good men and women he employs.

I'm talking about a single mother like Alice Gladspring of Macon, Georgia, who works two jobs to support her daughter and pay for classes at a local university.

And folks, I'm talking about a young man like Billy Miles of Bellefleur, Oregon, who endured horrific experiments at the hands of the extraterrestrial colonists, and would be denied essential care under Mitt Romney's health plan because of a pre-existing condition incurred through no fault of his own.

Let's not mince words here. We all know the last two seasons of the X-Files have been especially difficult. Without Mulder to anchor the show, the stories haven't been as rich. We've seen the final seasons struggle to cope with the complicated backstory inherited from previous seasons. The new guy, the liquid metal guy, does a great job, but he needs more than two seasons to clean up the mess and find his own footing.

I made a promise to myself and to the American people, that I would watch the X-Files from start to finish. I'm now prepared to deliver on that promise. But it's important for everyone to come together and help us deliver on another promise -- one we can't do without your vote and your support.

If you can donate even $15, it will go a long way toward helping us complete the journey we started four years ago. We can win this.