The President and I have a routine -- every Friday I find out from his staff where he is having lunch, then join him. Even after three years, he still gets surprised when I show up.

Having a meal with the President is a great honor, and soon four lucky supporters will get to share in that experience.

Donate $15 or more today and you have a shot at winning dinner with President Barack Obama.

There won't be any cameras or audience -- just you, three other Americans, the President and myself if I can get the details from his staff.

I don't have all the specifics yet, but I'm pretty sure the President will be footing the bill. But just in case, have some money on hand. If I have any say on the matter, we'll be getting Italian. If you don't like pasta, you might not want to enter.

If you're one of the lucky winners, there are a few things you should know about dining with the President. 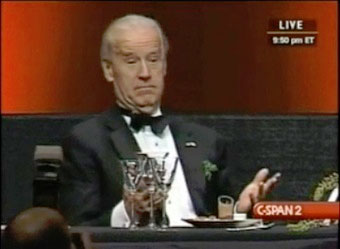 First of all, he hates it when you talk while chewing. The President has scolded me on more than one occasion for that, and I can't say I blame him. I get so excited talking about my favorite episodes of the X-Files that I often forget there is a big chunk of sandwich in my mouth.

I remember being particularly excited after watching episode 3x17 ("Pusher"). Long story short, a meatball destined for my stomach ended up on the President's tie, and he was none too happy. He did agree the episode had a riveting premise and that mind control is a scary thing.

It probably goes without saying, but keep your hands off his food. Some people are fine with that sort of thing, but not the President. I'm usually the first guy to polish off a meal, so I have to stop myself from grabbing a French fry or piece of garlic bread from nearby plates. The President just about karate chopped my arm off once when I reached for a handful of salad.

Another thing to avoid is asking him about classified UFO documents. I'm sure you and I are both of the same opinion here, but please leave it to me to get those documents out in the open. I've started the delicate process of buttering him up, and I'm very near to sealing the deal.

You definitely don't want to get the President talking about Quantum Leap. He loves the heck out of that show, and will talk about it all day if you let him. I find it pretty boring myself, so I try to steer the conversation away from any stories or historic situations that might remind him of Quantum Leap episodes.

Finally, since I'll probably be there, please be careful of spoilers. Because of important work in Washington, I have not been able to progress beyond the first couple episodes of season 4.

I'm also behind because I launched a new initiative in hopes of getting the President up to speed with me. During our weekly lunches, I play episodes on my portable DVD player. I have to do a lot of pausing when less polite people start talking, so we've only made it through a couple episodes. It's a slow and frustrating process, but we'll get there.

You don't want to miss this opportunity!