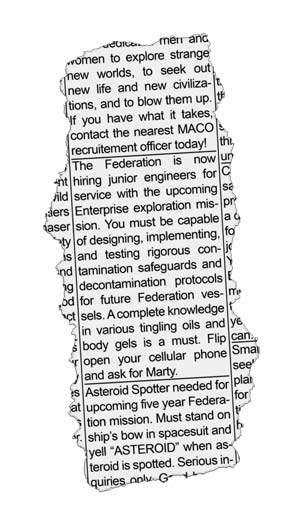 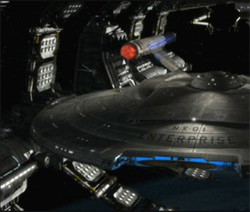 The ship is up in orbit in the Star Dock, but it's mostly just a shell. All the real work is happening down here in Montana.Yo, I'm Donald Scoobie. No relation to that old cartoon dog. You can call me "Scooba Don" for short.

I'm 28 and I'm an engineer working on the NX-01 project. We're building the first real starship designed by humans for exploration of the galaxy. It's pretty much an engineer's dream to be assigned to this project. I love it, even if I am low man on the totem pole.

There are plenty of rumors about the ship we are building, but seeing it under construction is a whole other deal. It really pumps you up! Right now my job is just about done here and we're about a week out from the christening. Word is it's going to be called Enterprise. Gaaaaaay. I'd go for something much more awesome like Death Hammer or Dragonslayer. I guess those fruits in Starfleet are too politically correct to ever pick a badass name like that.

But, I'm getting ahead of myself. The story you guys want starts quite a ways back when I first arrived in Montana to work on this project.

I went to Faber Tech, third choice behind Stanford and MIT, but it had great campus life so I can't complain. Delta Tau Chi! Woooooo!

Struggling through my first year of grad school I landed the job here at the Warp Five Complex in Bozeman. Home of the Fightin' Cochranes! Go Cochs! My bachelor's turned out to be all the qualification I needed for a program that was gobbling up everyone with a degree in fifty countries.

I arrived at the Warp Five Complex three years ago. Since then I've discovered that they never intended to let me loose on warp field theory. They're rat bastards, but I admit my assignment to decon might have had something to do with my 1.6 GPA.

The way budgeting for a big government project like this works is that you get a certain amount of money budgeted quarterly for everything. Then that budget starts at the top and starts trickling down. Propulsion takes the first and biggest chunk, defensive systems sinks its teeth in, life support, medical, so on and so on, the amount of money getting smaller and smaller. By the time it hits hydroponic lab there is almost nothing left, and those dope fiends look at us, laugh, and toss us a few scraps.

Three million dollars may sound like a big budget, but you've got to remember we are government subcontractors. Screwing a handle into a drawer ends up costing a quarter million.

The head of decon is Vladislav Zorba. Zorba the Greek, we called him for a while, even though I'm pretty sure he's Ukrainian. Once we got to know him it was Vlad the Recliner. Always sleeping and always delegating.

Hey, at least we get to see pictures of space.With most of our budget going into overhead we were going nowhere fast and responsibility for setting up decon protocols kept getting handed down. Eventually, there was no one left to hand it down to and I was handed the last sliver of our starting budget and some ridiculous design schematics.

I think it was Paul Harrison, the guy right above me who always worked from home, that managed to come up with a design for a decontamination chamber that looked like one of those pneumatic cylinders at a bank drive through. It was state-of-the-art and would have cost about a hundred times what we had to spend. Shitty GPA or not, I knew right away that I would have to start from scratch.

That's the background of how the junior-most engineer got put in charge of decon protocol, but you said you wanted more of a day-by-day type of thing. Allow me to walk you through the project once I was in charge, one prototype at a time. Believe me, things did not come together easily, but I'd like to think I did the best I possibly could have with the resources available.

The goal was to create an extremely cost-effective means of decontaminating crewmembers of the NX-01 upon their return from alien planets and cultures. It was a difficult problem. You don't know what pathogens someone might bring back, but you can't just fry the crewmembers in a gamma radiation chamber for six hours or submerge them in bleach. The crew has to remain alive and relatively unscathed while the chamber rids their bodies of every possible contaminant.

For all of the other engineers in decon it seemed like an impossible task. That's why the new guy - me - ended up with it. What they didn't realize is that my many years at my frat house equipped me with some secret weapons. We may not have the best grades at Delta Tau Chi, but we make up for a lack of grades with a certain sly inventiveness.