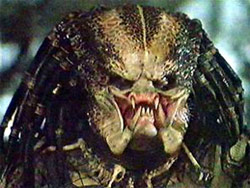 Sometimes I love this job. Sometimes I...phr'esh'ka this job.Ever since I received my journeyman certification I left the lifestyle of the traveling armorer behind. I work for Xergk Armory now, crafting their interlocking combat armor system and tweaking their designs from the frontend. It’s a much better environment here than schlepping around the galaxy on some rust bucket like Princess Nort and catering to rich pauk-balls like Sh’el’don. My bosses and coworkers respect me, and even the totally honorless and weak technical designers seek out my input from time to time.

Most recently, I have contributed several safety features for the XA-77 Interlocking Hunting System. There was even an article in Casters & Shuriken about all of the good work I did on the XA-77. I also won some award for my safety features from the Central Office of Hunting Safety, but this is an organization without honor designed to protect the weak, so I did not accept the award.

The most well-known of the changes I brought to the XA-77 include my incorporation of safety caps on the shuriken and smart-disc blades. These help prevent painful and sometimes dangerous cuts while handling the weapons and we all know how dangerous alien bacteria can be on the immune system.

Probably the most controversial safety measure that the design department took from talking to me was my idea of extending the chest plate to cover the abdominal region. I realize that it is considered without honor to hide luscious abs, but there is a reason nearly abdominal injuries are responsible for the majority of the deaths of hunters. It is because for over 3,000 years we have been using armor without a stomach plate. I thought it was high time we stop being s’lunkarded. 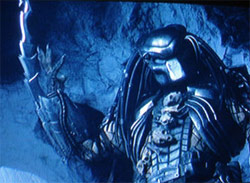 Want some candy? Wantsomecandy? WANT SOME CANDY?I also added safe-switches for the plasma caster and spear gun. Predators with juveniles in their home should always have these weapons in safe-mode to help reduce the risk of accidental discharge resulting in loss of limb, impalement, or total body explosion. Humans have been using these switches for years on their exploding rifles and pistols. Just because it is an alien concept does not mean it is a bad concept.

Lastly, I am probably proudest of my addition of a recessed on/off switch for the atomic self-destruct device. We have lost too many noble predators to accidentally key-presses activating the destruct device. Some statistics say as many as 1 in 4 hunt fatalities are a result of a predator rolling over on the keypad while sleeping and initiating the destruct sequence.

Xergk Armory has been very good to me over the decades. I hope that as I approach elder status I will be able to continue to contribute valuable knowledge and experience to the crafting of armor. I know that many reading this may not respect me or do not think my profession has honor. For those of you that feel that way: go v’saun yourself up the xlo’op with a cystathian’s fat ph’lang.

I hope you meatlings have learned some valuable lessons from reading this wisdom. Make no mistake, I am not here for your entertainment. I only agreed to provide this account of my work on the condition that it be used as a starting point for a human educational program. The soft meat must learn its subservient place in the galaxy.

It is not all bad. Some of you creatures have more of my respect that some of my own. At least you are honest in your relentless lust to expand your empires, destroy each other, and reproduce like flun’nks in heat.

I do have a question for you, humans. Why do you keep attempting to recover hard meat from deep space? You seem to have such great difficulty acquiring these xenomorphs, yet there are thousands of them sitting dormant on your planet. Would it not be easier to simply go to one of our abandoned temples and recover the xenomorphs there? Just a suggestion. I do not wish to seem like I am pushy about it.