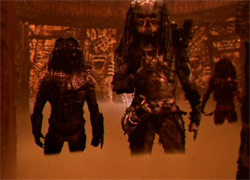 I had been working as an uncertified armorer for around fifty years by that point. Keep in mind, it can take up to 200 years to even make journeyman, but I was well on my way. Working uncertified means low pay, relying on your reputation and taking work where you can find it. I found it that year aboard the hunting skiff Princess Nort. I was a freelancer for Xergk, familiarizing myself with their gear and hoping to get a job with corporate, but struggling to get by in the meantime.

Princess Nort was a dank and smelly rust bucket older than me with a real mercenary of a captain by the name of Do’ug. He was an honorless scumbag, but we actually got along pretty well. Do’ug’s friend P’ete also served aboard Princess Nort, but he kept mostly to himself and his Arcturian pornography. So one day Do’ug and me are down at the dockyard just waiting for a job to fall into our laps when this old codger walks up to us.

He said his name was Sh’el’don and he said he wanted to hire out a ship for a hunting expedition to earth. That’s pretty standard stuff, but there was something pauky about this guy. For one, he was awfully old to be hiring a ship for his kid. The guy looked a good 200 years past the mating phase, and if some 200 year old is relying on his father to hire a hunting ship then something definitely isn’t right.

Still, this Sh’el’don guy’s money was good, so we agreed to be ready to set off in two days. Two days roll by and we’re juiced up with mi and ready to get going. About an hour before we give up and head back to the dockside hotel Sh’el’don showed up. This guy had fifty cases of luggage, several females working as valets and drivers. I mean he showed up wearing a nolf outfit, you know with the white boots and the sweater vest and the little hat with the tassles on top. The whole deal. We could even see the nolf clubs sticking out of the back of his trunk.

Me and Do’ug exchanged looks like, “What have we gotten ourselves into?” But, I mean, what could we do at that point? We had already spent some of his money on fuel and equipment and females.

It was not like we could just say, “Sorry, you look like a major spoiled rich dumb-pauk. We’re going to have to cancel.”

Do’ug sighed and climbed into the ship. I started loading Sh’el’don’s trunks onto Princess Nort while he walked from female to female giving them clutches on the cheek goodbye and grabbing at their dorsal ridges. Seeing that made me want to disgorge my olitic sac.

The journey to earth was long and unpleasant. Sh’el’don would start talking about some dull subject and then he would repeatedly insert little factoids about how great he was. After the first hour or two he was not even subtle about it, he would just interrupt himself to brag.

“Did you see that article in last week’s N’eh Yorak’er about the 6-ton genjabeast P’ic’kles brought down?” He would ask rhetorically and then continue. “That reminds me of the time I was hunting on the moon of Talo and I came across a 20-meter quantumpede. It took seven shots of my caster to bring that thing down. Nearly took the leg off one of my sherpas. He was so grateful he said he owed me a life debt, I just-“

On and on and on like that for hours on end. The ph’lang-head even brought his trophies with him and set them up in a little display near the loading ramp.

When he wasn’t rubbing our snouts in how great he was, Sh’el’don liked to discuss plans for the upcoming hunt on earth. That was the usual subject I discussed with hunters. I was prepared for talking about armor, weapons, location, strategies, prey animals, and that sort of thing. What I was not prepared for was how detached from reality Sh’el’don’s concepts about pursuing the soft meat were.

He was still operating under the impression that the yautja maintained temples where we were worshipped by humans. He figured he was going on a canned hard meat hunt near one of earth’s polar regions. When I explained that the last of these temples was destroyed recently, he seemed unperturbed and declared he would simply have to settle for soft meat.

“I suppose if I battle enough of them with their spears and swords, they might give me some challenge,” I still remember him saying.

The poor c’jit had no idea what he was in for. When we arrived at earth he even demanded we land near one of the human’s largest settlements. I think he called it a village. Yes, the village of Los Angeles, Sh’el’don, population 200 bazillion humans with explosive pistols.

Despite my expectations, things seemed to go fairly well for Sh’el’don at first. He had me equip him with the absolute best weapons and armor in my arsenal, so I suppose a drunk m’ysh could kill a few humans here and there. It was still a surprise when he brought back a dozen human skins on his first night out in the wild.

Things went downhill from there, and it quickly became apparent that the humans were not just increasingly capable of defending themselves, they were also actively looking for him. They were hunting him. Sh’el’don was seemingly unaware that when “the hunter becomes the hunted” it is basically the lamest thing that can happen. He refused to give up, and to his credit I believe he did take down most of the humans that were on his tail.

Not all of them, though. A dark-skinned human followed him all the way back to our ship and actually entered Princess Nort in pursuit of our wealthy client. You humans may have difficulty understanding our superior culture, but surely even your savage brains can comprehend why this was an intolerable breech of tradition.

We all ran down to the entry area to see what was happening, and just as we arrived the dark-skinned human was beating the everliving pauk out of our predator Sh’el’don. 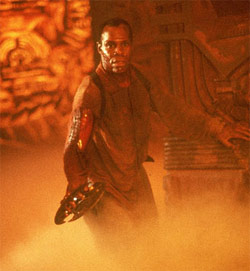 For a human to kill a predator in hand to hand combat is a shameful event.Captain Do’ug was like, “Do you think we should do something?”

I just shrugged and watched the human get a hold of Sh’el’don’s smart disc and finish him off with it. I think P’ete even busted up laughing at that point. It was just too ridiculous to be believed. A human slaying a hunter in hand-to-hand combat is probably the worst possible fate for a hunter next to xenomorph impregnation.

The human finished killing our employer and looked up. He saw us standing there and watching his final battle. We were all kind of waiting for him to come after one of us, which would have been fun, but the guy just dropped Sh’el’don’s smart disc. He started talking in that infernal human language.

“What do you think he wants?” Do’ug asked.

“I’m not sure,” I replied, “but I think that he thinks we’re going to kill him.”

“Do you want to?” Do’ug hefted the combi stick he was holding.

The human didn’t seem to be in any particular hurry to leave. It was almost noble how he was resigned to his fate. I glanced over at Sh’el’don’s rdiciulous trophy case and I spotted something that was obviously human. I grabbed it and walked over to the huma.

I extended the object to him. I think it was a very old and obsolete model of one of your little exploding weapons.

The human took it from me and said some more of his words. About that time Do’ug fired up the engines. The human finally got the message and ran out of our ship.

“What do you want to do with all this other junk?” P’ete asked, pointing to the trophies and baubles Sh’el’don had collected.

“Eh,” I shrugged. “Toss it out the airlock when we get into space.”

That was definitely my worst hunt.