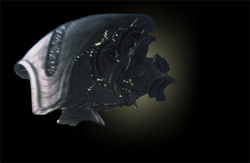 My excitement as we approached your planet was intense. A good sign disappointment was in my future.This was to be my honor hunt, my first blooding, but I failed my hunter’s exam and was instead brought along as a mere armor fitter. I was not even permitted to touch the armorer’s tools. I was only allowed to help the hunters prepare for battle. In many ways this was the most disgraceful moment of my life, yet that will not be the focus of this memory for that is not the way of remembering.

We predators celebrate our hunts in song. The lyrics are too complex and beautiful for your pitiful human mind to comprehend. To ease in your savage understanding of our history I have transformed the tale into prose.

The hunting skiff D’artag’nan arrived in earth orbit in the human earth year 1917. It was not one of the prouder vessels and it did not have a history of great hunts, but it was serviceable and fast. This was to be my hunt, but as I mentioned I had failed my hunter’s exam. I experienced great difficulty concentrating on the multiple choice portion and I have come to understand that I am very bad at test taking.

In addition to the ship’s pilot there was myself and Cra’ig, the armorer, as well as Ja’son, the hunter who was to replace me on my hunt. Cra’ig barked orders at me as Ja’son and the pilot selected the location for the hunt.

I was in my 20th year, just grown, but still surly and unrestrained. To be subjected to the indignity of being the ship’s armor fitter on top of the shame of being denied my hunt was almost too much for me to stand. I was hostile at all times, and the armorer, Cra’ig had to beat me about the head and neck to inspire motivation.

D’artag’nan accelerated and conveyed us to the planet’s surface on the continental mass the soft meat refers to as Europe. A war was raging in the Western portion and this was to be used to provide cover for our arrival and to mask our hunting activity.

For much of human history your wars were very simplistic and small, with perhaps a few thousand of your creatures running about and hurling spears or using metal blades. By 1917 in your years, however, your wars had become spectacular shows of carnage. You had adopted the use of your explosive rifles and these were supplemented by amusingly oversized artillery cannons.

This war seemed to be the most spectacular of all human wars in our records and there was some concern that our ship might be inadvertently damaged. I recall witnessing massive and grossly dishonorable artillery barrages. Feeble though they may have been in comparison to our ship’s arsenal, they were still sufficient to damage our vessel’s most sensitive components.

Fortunately, this did not occur. The pilot was able to land D’artag’nan undetected in a secluded forest area. Ja’son made ready to commence the hunt and I was called upon to fit him for battle.

You must understand, at the time of this hunt we were not using Xergk combat armor, but rather than inferior C’uak combat armor. For my first time as an armor fitter, and in spite of my hostility, I did an exemplary job. They can tell the tale of my failure to properly armor Ja’son out of spite all they wish in the drunk houses of derelict hunters, that does not make it true. When Ja’son departed the ship he was as well-armored as any Yautja of his day.

As you might have surmised from my explanation, Ja’son did not have a successful hunt. Things went quite well at first. His cloaking device allowed him to navigate the empty wasteland between the opposing armies with minimal danger. He was occasionally struck by a bullet, purely by chance, but his C’uak plate was more than adequate for the task of protecting him from crude human arms.

You humans even captured an image of Ja'son on his hunt. The shame.Yes, Ja’son recovered several pelts from humans of the French tribe and several from humans of the German tribe. He threw the human armies into chaos and things seemed to be going very well.

Is it my fault that the C’uak armor system did not incorporate a rebreather mask? It is standard equipment for all Xergk models, even the cheapest, but at the time we saw no reason to use them on a planet with a breathable atmosphere. How were we to know that the humans would devise an employ a weapon so cowardly as poison gas? Disgusting. We simply do not think of such things.

Once we became aware that Ja’son had been slain, I was permitted the opportunity to recover his body and salvage what remained of my honor. I immediately accepted the offer and was quickly able to locate his remains and return them to the ship. That was the only time I have ever worn combat armor.

Our return to the homeworld was not greeted with the usual fanfare, for our ship bore not one, but two failures. I was a failure of the tests and thus branded a not-hunter forever and Ja’son, the true hunter, died at the hands of the devious soft meat. I wish I could tell you that this was the last of my failed hunting expeditions, but human decades later, there was another even feebler attempt.