The fall of man is not the result of us letting homosexuals have kids or allowing dudes to marry horses or even letting atheists to speak freely. No, it's the result of our continued tolerance of the Bradford Exchange. When the Rapture happens any minute now, the only ones disappearing will be babies and people who've been in comas for the last twenty years. We're all guilty, and the crime is as severe as any documented in a law book or Biblical top ten list.

I cite, as the latest batch of evidence indicating the Bradford Exchange and all of humanity, the following examples of actual merchandise: 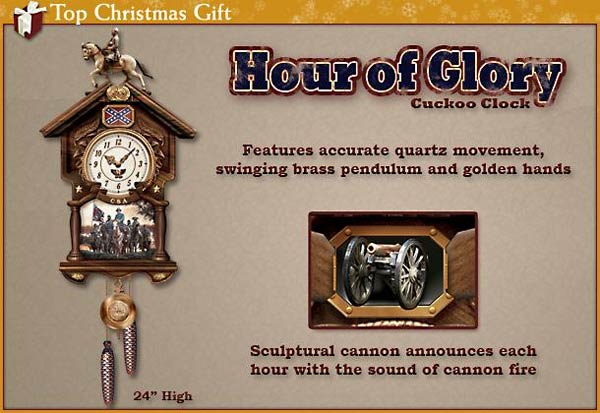 "Fill your home with hours of historic inspiration with a first-ever Civil War collectible cuckoo clock, available only from The Bradford Exchange."

In the waning days of the Civil War, when all hope seemed lost for the Confederacy, members of the Southern Elite began to take refuge in a large underground vault. Over one hundred years later, the mutants inside that vault returned to the surface world and immediately founded the Bradford Exchange.

Since then they've been working tirelessly to remind people of the GLORIOUS SOUTH by affixing its assorted symbols and heroes to model trains, fake knives, watches, tables, rings, jackets, shot glasses, and plates. So far they haven't really succeeded in overthrowing the United States Government and replacing it with a new Confederacy, but maybe with a little luck this cuckoo clock will be the one piece of merchandise that finally inspires the South to Rise Again.

Every hour from now until the time the reincarnated General Lee restores the South to its true glory, this beautiful clock will erupt with actual cannon fire sounds. I can't imagine a more inspiring thing. Nothing gets me in the mood to secede from the Union and buy a slave like the sound of cannon fire. These things will probably sell like really hot cakes, so buy like a dozen. 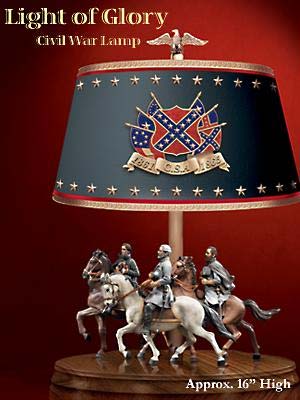 This beautiful gravitational well was formed when the heroes of the Confederacy left their indelible mark on the fabric of time and space.As if having time tainted by the lingering stains of the Confederacy wasn't enough, now they went and soiled light itself. We're running out of natural phenomena to slap General Lee's face on.

I guess this lamp could serve as an important reminder to guests that you're an irascible redneck liable to snap at any minute. Either that or you're like the immortal protagonist from the unforgettable Alphaville song "Forever Young" and the days of the Confederacy were really awesome for you and you want to treasure them always. As a betting man, I am gambling on the former.

If you're a serious lamp collector, you could do far better. For example, the EXCLUSIVE FANTASY WIZARD AND DRAGON ART TABLE LAMP THAT ILLUMINATES A SECRET REALM OF ENCHANTMENT is far more dramatic and doesn't reference such a divisive and terrible time in American history.