Pointless Things You Can Do to Help 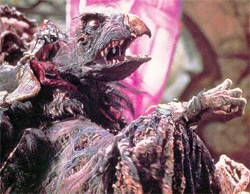 The Gulf was green and good until the blowout preventer cracked.Day 48 or 50 or something. Jurassic death still spewing into the Gulf of Mexico. Entire oil industry still evil. Government still worthless. Dolphins coated in oil. Pelicans barfing tarballs. Horrible Skeksis seagull trying to lift head out of black tide running 24/7 on news and ruining every meal I eat in front of the TV. And I eat every meal in front of the TV.

I feel powerless to help. They're trying everything down there, even the ideas some exasperated engineer mentioned as a joke at a meeting, but no one laughed and they thought it was a good idea, and then the original guy was too afraid to say he was only joking. That engineer stood idly by while BP dumped millions of gallons of dish soap in the ocean, lit the oil spill on fire, and shot piles of different pollution at the pollution to try to jam the flow.

Since nobody seems to be coming up with any ideas that actually help, I think it's time we do the next best thing and offer some ideas that don't help at all, but make us feel like we're helping. At least here in America this is a time-honored tradition during natural and man-made disasters. 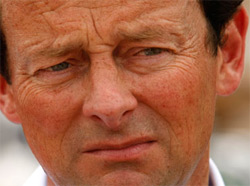 BP CEO Tony Hayward has been under fire for his company's response to the disaster, despite being recently named "Britain's Squintiest CEO."We sent truckloads of soiled shirts to Katrina victims in need of housing. We texted our dollars to Haiti because we were too lazy to donate normally. We mailed copies of Maxim to our troops serving in a country where a child sex slave can be bought for a few dollars when all the troops really needed were a few handi wipes to clean the sand and gunk off their catamites.

Americans are already starting in with the meaningless gestures for this disaster. For example, Louisiana Democrat Charlie Melancon, named after the famous form of taint cancer, wants us to sign an Internet petition and "Send BP CEO Tony Hayward a Pink Slip." I'm sure Charlie knows this will have absolutely no impact on Hayward's employment, but he wants everyone to know that he is providing a voice for their message: "Tony Hayward, Americans are powerless to stop you!"

Meaningless, gestures, and American are three words in a sentence I used earlier, but in a different order, and I've come up with a few more words to expand on that concept. A few meaningless gestures for Americans, if you will.

Scarecrow Buoys - Assemble scarecrows of something seagulls and pelicans hate. Whatever the opposite of a Burger King parking lot is. Place these scarecrows on buoys and tow them out into the oil spill so that birds will be too afraid to land. Include some buoys with signs that read "OIL - NOT SAFE" and, following the example of European cigarette packaging, a few with pictures of dead birds covered in oil. That way they will know the consequences of their disgusting oil-landing habits. When none of these techniques work employ volunteers in boats to wave their hands and yell at birds.

Idea website - Using the so-called "Wisdom of Crowds" has become a big trend in recent years. There's even a special term for it, but I have lost the human ability to retain information since placing all of my short term memory "in the cloud." Whatever it's called, we need to create a website for average folks to use their good ol' fashioned wisdom and submit their ideas for how to plug the leak and then vote on the best ideas.

Learned behavior - Did you know that certain types of porpoises have learned new ways to hunt fish and communicate these ways to other porpoises? I think that's true, but I might have dreamed it during one of my recurring nightmares where I'm a fish being hunted by porpoises. The point is, good ideas can spread among animal populations, so it's just a matter of catching some fish and crabs and turtles, teaching them how to avoid oil, then releasing them back into the ocean to show all their friends how to avoid oil. We may have to do the release using helicopters since by the time we're done training lobsters there will be oil covering the beaches all the way to Minnesota.

Wash a bird - Doesn't have to be a bird covered in oil, just catch a bird and wash it. Petting zoos usually have some geese you can catch pretty easily. Every bird probably would enjoy a bath. If you really want to feel like you're accomplishing something, dip the bird in oil and then wash that off. I recommend coconut oil, it smells goooood.

Yell things at BP - BP has conveniently placed offices in almost every American city. Stand outside and shout, or go inside and harass the employees. Since they are minimum wage employees or franchise operators with minimal financial connection to BP you should channel your anger at their corporate masters into constructive criticism specific to the location. Something like, "You have too many bullshit flavors of M&M! What is this, Mint Brownie? Rootbeer? Fuck you guys." or "Nice haircut, I like it a lot. For a jerk. Not." or "I just went in your men's room and took a big, nasty crap alllllll over the crap that was already on the toilet seat!" Remember what the President said: change starts...something, I can't remember, gonna have to tell you to check the information cloud for this one.

Discuss online and never back down - Never. Back. Down. We would rather die on our feet than whatever we were doing on our knees a few minutes ago. Whatever your position is on this issue entrench completely, find a website, and repeat your position using all capital letters or exclamation marks. Hyperbole is very helpful when discussing these sorts of nightmarish global catastrophes. Use "literally" as often as you want to describe things that aren't literal. The world needs to understand that millions of tiny baby crabs are being literally murdered by BP and your blood is literally boiling.