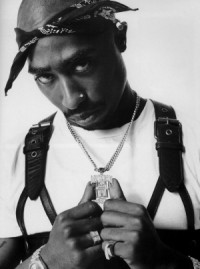 Tupac opposes Prop 6 because it will spend one billion dollars on unproven programs with ZERO ACCOUNTABILITY.If Prop 5 is designed to relieve stress on our overcrowded prisons, then Prop 6 is its mortal enemy. It seeks to pack more prisoners into jails with tougher penalties on trivial things like being a gang member while committing extortion, robbery, and intimidating witnesses. A life sentence for carjacking sounds nice, but don't these guys usually find Allah in prison (well, the version that doesn't want to kill us all)? A parole hearing isn't out of the question after a couple of decades if the dude starts seeing Muhammad in the walls of his prison cell.

The measure also makes meth possession a felony and increases prison terms for possession of meth with an intent to sell. I wonder how someone could reconcile voting yes on both 5 and 6.

There's also some wacky stuff about expanding the situations in which hearsay evidence is permissible in court. Lionel Hutz is spinning in his grave.

Of course, this thing is going to pass because hey, police funding and gangs. What the hell am I going to say? "Fuck the police"? Sometimes you just have to pick your battles.

Propositions 7 and 10 - "The Feel-Good Ballot Initiatives of the Year!"

How you should vote: No on both.

Both the California Democratic Party and the California Republican Party are opposing Prop 7. You don't even have to read the goddamn thing to know that you're going to vote no on this. I'm not going to waste your time even telling you what it's about.

Prop 10 is the infamous payday for natural gas baron T. Boone Pickens. Renewable energy and alternative fuel vehicles sound good and a few morons will vote yes on this, but this proposition will provide a billion dollars in rebates to purchasers of "heavy-duty vehicles weighing 25,000 pounds or more" as opposed to $340 million for high and very high fuel economy light vehicles.

The idea is to sell more heavy-duty vehicles that run on natural gas, a product sold by the backers of this ballot measure.

Both measures sound good in theory, like the time my girlfriend said her flow was light and that it was okay to go down there, but all these two propositions will result in is a bloody fiscal mess.

In the glory days of 16-bit consoles Sonic the Hedgehog was the edgy alternative to Mario. He was faster, more hip, and was blue, basically the opposite of poor old Mario. Unfortunately Mario has aged far more gracefully than Sonic has, turning Sonic into the video game equivalent of an old queen. 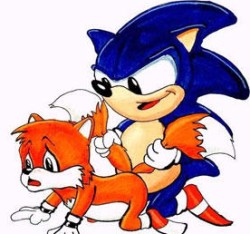 This goes against my religion. I'm pretty sure it goes against all religions though. Sonic the Hedgehog has always been a progressive figure. The Sonic saga was one of the first to feature the first openly gay video game character, Miles "Tails" Prower ("Miles Per Hour"). Sonic did not care that Tails was gay and neither did we. Unfortunately homosexual liberals have perverted the legacy of Sonic to turn his games into festering piles of queer bait that are played in our schools.

Prop 8 seeks to redefine Sonic from the icon of furry perversion back into a figurehead for alternative console mascots everywhere. It was Sonic who led the fight against Mario, alongside Crash Bandicoot, Gex, and other failed mascots, similar to how Rachael Ray and Ellen battle Oprah in the eternal struggle for the attention of stupid women.

This law mandates that Sega make a good Sonic game within three years of its passing. Failure to do so would turn Sega into a furniture company.

VOTE YES TO PROTECT THE SANCTITY OF THE GREEN HILL ZONE. Vote no on the real one by the way.

How you should vote: Don't bother. It's money for veterans.

It's going to pass anyway, like it did the last 26 times. In fact if you try to vote you might even screw up and become the only one to vote no on it. Then you go to hell.

Budget crisis be damned. This is your chance, California. Let's put newly rehabilitated big gay construction dudes to work on our big gay trains so we can get gay married while we eat gay eggs from Mexican chickens. California, redefining gay while hiding from creditors.

Damn, by the way, I left my wallet in my other pants. Can you get this one? Thanks a ton.