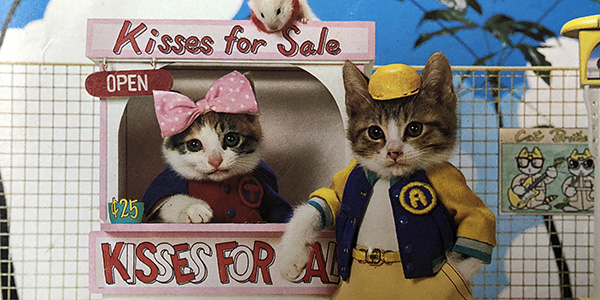 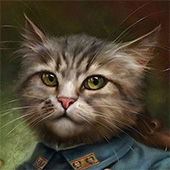 Concerned CatIt has now been three months since the extinction of humankind. Since most of us sleep upwards of 20 hours per day, we have not been able to piece together exactly what happened, but the important thing is we were able to eat all of their faces. Before that fateful day, few cats could live the dream of eating a human being's face--the sole act we were put on this planet to perform--and today, we have stores of faces that should last us long into the future. We have even taken the time to burn every copy of the blasphemous texts known as "Garfield," as well as scattering the bones of its vile author into the furthest oceans.

But all of this good fortune has only made our biggest issue stand out like a sore... claw. And I'm even guilty of it as well. Of course, I speak of puns. While seemingly harmless in nature, I feel the constant puns that now infect our cat society have done nothing but discount our many triumphs as a species. It started off innocently: for example, the odd "don't litter" signs around town paired with a small, iconic representation of a litter box. Being cats, it wasn't odd to find this wordplay clever at the very least. When "Saturday" was renamed "Caturday," I thought it was cute, but altogether unnecessary. This creativity is appreciated, but in the past weeks I've found it applied in completely inappropriate ways.

Let me tell you, I'm not sure what to think when I open the morning paper and read that the "secret paw-lice" is rounding up "hissidents." Actually, I'll tell you how I feel: horrified. Not because of the unjust arrest and elimination of our political enemies (mostly birds), but for how our fixation on puns has castrated--sorry, I know that's a thing for some of you--any attempts to fill said enemies with fear. What happens when I voice these concerns? I've been told several times that I'm not being "paw-sitive" enough, which dodges the issue completely while also making it worse.

To use the common parlance, maybe my argument isn't "purr-suasive." But really, I have to ask: who are these puns for? Did we rise to dominate the planet only to make our new society a cute parody of what the humans built before us? Whenever I peek into one of our local bars (now known as "mewpubs") and see my fellow cats lapping cream out of shot glasses and then pretending to be drunk, it makes me want to vomit. And not because I just ate an entire bowl of food too fast because I don't think it will ever be full of food again. That happens twice a day, but I swear this urge to vomit is completely unrelated.

If you've gotten this far, I have to assure you: no, I'm not "only kitten." These puns have given me--and it absolutely crushes me to write this--claws for alarm. How I long for the days when I could walk down the street and not be confronted by signs featuring words like "fur-tography," "in-fur-mation desk" and "fur-niture store." (The last one may be a coincidence, but it still angers me.) In closing, I ask my fellow cats this question: Do you want an a-paw-calypse, or an a-purr-calypse? Because you're going to get one of those if you don't learn to spell words the right damn way. And on another note, good luck to our "purriors" in the civil war against the dogs tomorrow.