Mrs. Huckabee Sanders, You Will ALWAYS Be Welcome at Blimpie 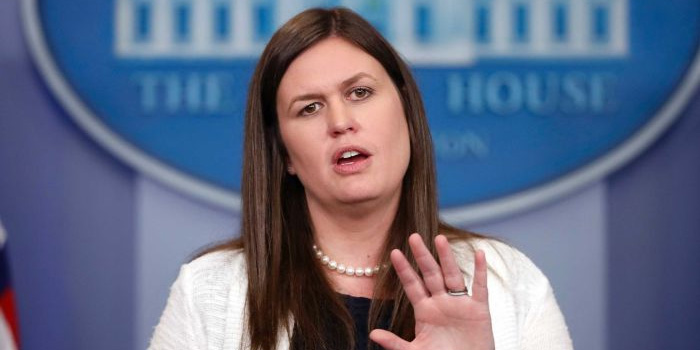 As the proud owner of the Blimpie corporation--maker of fine submarine sandwiches since 1964--I have to say I was shocked when I heard the news about White House Press Secretary Sarah Huckabee Sanders being turned away at The Red Hen restaurant. Here at Blimpie, we value two things: giving our customer twice their allotment of daily calories for under eight dollars, and customer service. Even in my days as a humble manager back in the '80s, I never turned away a customer due to their political beliefs. Once we even had a homeless guy who thought he was Jesus, but since he had enough loose change to buy a small Fanta, we served him before calling the police. That's called "hospitality."

Mrs. Huckabee Sanders, no doubt you find this world an inhospitable place lately thanks to your unwavering political beliefs. But no matter how many restaurants may turn you away, know that you will always be welcome in the stable, rigid seats and cheerful fluorescent lighting of any Blimpie location--that's nearly 700 in this country alone.

And I mean no disrespect when I say, Mrs. Huckabee Sanders, you look like a gal who likes to eat. You Huckabees are stout, strong Americans, and no doubt in prehistoric times your clan would have been shoving around the boulders too hefty for most and scaring away predators with your steely glares. Why, I've heard about your brother, and the wild dogs who once roamed these lands would be no match for his powerful arms and penchant for animal torture. I married a large lassy myself, and if I was 30 years younger and Tabitha was not currently on life support, I'd take you out on the town and we'd fall in love at an Old Country Buffet over plate after plate of warm roast beef.

While here at Blimpie we are more of a trough-to-bag restaurant than a farm-to-table restaurant, we still offer quality, filling eats served inside a delicious loaf of wheat meal (the FDA will not let us call it bread). In fact, we've been so touched by your sacrifice that we've even designed a new sandwich after you. It's not on the menu--the bean counters in our market research department told us focus groups find your image "nauseating"--but if you ask for it, one of our talented sandwich architects will build it on the spot for you.

First, we take a loaf of wheat meal, split that bad boy in half, and layer it with slices of ham and cheese. But we don't stop there. Next comes three squirts from the mayonnaise gun--one for each branch of the government--and 13 pepperoni slices to symbolize the original colonies. At the end of the day, this tasty little number weighs in at 3000 calories, one for every victim of the 9/11 terrorist attacks. Let's just say you'll "never forget" how good it tastes.

Mrs. Huckabee Sanders, we applaud your efforts to end the illegal immigrant crisis in America, and though our low prices are very much reliant on the food items these folks pick and kill, we know you will help businesspeople like us with any of the problems that might stem from stronger borders and secret police. Like letting us finally hire free prison labor or charging our employees for bathroom breaks--listen, I'm just spitballing here. And if you want to help us out, maybe we can start talking about getting the government set up with a Blimpie contract to provide all of those caged children with some of our award-worthy sandwiches at bulk prices. From the looks of their poor little faces, they're definitely not getting enough mustard.