One of my hobbies as a bitter failure is bitching about anything and everything. As such, it is important that I surround myself almost exclusively with things I hate. Out of the 500 or so CDs I own, I like maybe six songs. I only watch movies that I think will give me something to complain about later on, and before you bring it up wise guy, no I'm not going to see the new Star Wars movie. I saw the last two. I can complain about Episode III on general principle and save myself ten bucks.

"Why pick on Comedy Central?" You might be asking. "The Daily Show is one of the best shows on TV, and South Park hasn't completely compromised itself in favor of heavyhanded political statements and formulaic 'both sides are right' bullshit." The short answer is fuck you. The long answer is shut up. I hate to interrupt your soliloquy but I've got an article to write so let's get to the fucking shows how about.

This show was Comedy Central's first foray into the world of spoofing reality television, and with any luck, television's last foray into the world of giving Wanda Sykes her own show. The premise of the show was a simple one, but I don't remember it and the show pretty much consisted of Wanda and some guy yelling and I think Sue Murphy made a guest appearance where she told Wanda and the other guy to stop yelling. I could go further but the show was cancelled a month after it premiered, and it's probably best to just leave it as an embarassing footnote in television history. At least it taught Comedy Central that if it wants to parody reality shows, it has to at least pretend to be clever. Wait, what? Oh shit, that's right... 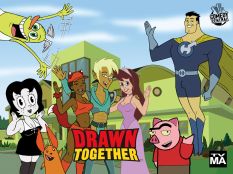 After failing to redefine the landscape of comedy with Wanda Does It, the programming mavens at Comedy Central returned to the drawing board with a kilo of methamphetamine and several hundred black crayons, and began scribbling furiously and without direction. 84 sleepless hours later, they emerged with nothing to show for it except ruddy skin, bad teeth, and a drawing board caked in black wax. Fortunately a homeless person slipped on the steps outside of their headquarters and it wound up being cheaper to give him his own show than to risk a costly lawsuit or settlement. The groundwork for Drawn Together had been laid. Engineered specifically to air after South Park, the show succeeded in wowing audiences where Wanda had failed. Unfortunately the "Wow!"s were usually followed by "What is this bullshit?"

The show might have been interesting if it had been written by someone who actually bothered to just bite the bullet and get that GED. The premise is this: several characters from all different genres of animation are brought together to live in a house and hijinks aren't far behind. There's a white girl who hates black people and says vagina a lot, a black girl who is sassy and sings and says vagina a lot, and a handful of other characters who could only dream of having one dimension and say vagina a lot.

Now that I've mentioned that there are musical numbers, I feel I would be remiss if I didn't warn you. They are not fun. They are not catchy. They are awkward. They are tedious and embarassing. Watching the characters struggle through a song and grasp desperately for clever lyrics is about as uncomfortable as watching rap videos with your parents. If your family is all down and shit, then just picture a naked 70 year old man being eaten alive by centipedes. Really picture it as vividly as you can. Got it in your head? Now take away everything funny about that and multiply the cringing by 10.

For a show that tried so hard to shock everyone, Drawn Together was actually quite forgettable. I bet you'll be as surprised as I am to learn that it's still on the air. One way of explaining this is the "Milton from Office Space" theory. Somewhere along the way, the order to shit can it was lost, and now it exists purely by mistake. Another, more interesting hypothesis is that it actually exerts some sort of magical chameleon power over the programming executives at Comedy Central. By being so bland and unmemorable, it has actually made itself invisible to them. Their eyes automatically gloss over every Nielsen report proclaiming the show a ratings black hole. Or maybe there are just enough Nielsen households that are too high or stupid or lazy to change the channel after South Park, and are willing to watch something that gives Blue Collar TV a run for its money in terms of banality. Which reminds me, I've got a segue coming up... 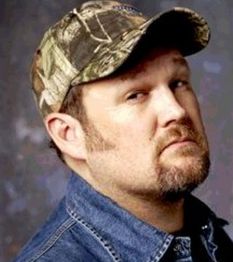 Hey how about a beer what tastes like mud flaps?

If you're capable of writing your own name in under three tries, you probably don't need to be told why Blue Collar TV is an insult to everything you hold sacred, but humor me. Before I get started, I should point out that Blue Collar TV originally aired on the WB. That means some higher up at Comedy Central actually became jealous of the WB's monopoly on Blue Collar TV. Somewhere along the lines, the words "Why should they be the only network that gets to play that show? Get it on the air, pronto!" were probably uttered. Okay, let's look at the hosts:

Along with a cast of several others and a bottomless well of stupid, these three charmless bumpkins manage to crank out half hour shows packed with "sketches" designed to appeal to audiences who hate reading as much as they love spousal abuse. Some common sketch themes are: Hunting, farting, trucks, truckfarting, hunting in your truck, farting in your truck, hunting for farts on the way to your truck, and not loving your children. I'm pretty sure they only air this show to make watching Mad TV hurt comparitively less. The strategy itself may not be too clever, but you have to admit that it makes for one of the top ten segues ever written.

I could go on and on about why Mad TV is bad for America, and how they cram their sketches full of terrible celebrity impressions and one-trick pony recurring characters to avoid having to write anything coherent and funny, but I'm getting tired so I'll just tell you a little story about Mad TV and me.

It takes place an unspecified length of time ago, a friend and I were tripping on an unspecified drug, laughing our heads off, and channel surfing. We happened to accidentally land on Comedy Central during an episode of Mad TV. I believe the particular sketch was Alex Borstein doing her inimitably inaccurate impression of Janeane Garofalo, and answering the door for some trick or treaters. Keep in mind that, up until this point, we had found absolutely everything cripplingly hilarious. C-Span. CNBC. CNN. All funny. Mad TV actually sobered us up. I had previously thought you had to be high to find the show funny. As it turns out, the exact opposite is true.

Here is a short open letter to anyone with string-pulling powers at Comedy Central: I have tried adjusting my personality to accomodate your programming line-up. Nothing happened. It's going to take both of us to make this relationship work. All I ask is that you make an honest effort. Thank you in advance.