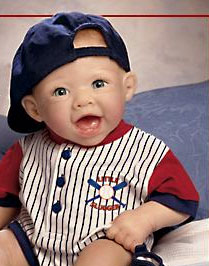 Here is a tall bold slugger set vivid against the little soft babies.For a large chunk of her life, my late grandmother had a hobby making dolls. She would sew and stuff them, make miniature outfits for them, put them on little stands, and place them on shelves. After a few decades, she had well over a hundred of these things, largely consolidated in a single room we ominously referred to as "the doll room." Aside from a single bed, the doll room consisted of several levels of shelves lining the walls, each heavily populated with miniature people. Needless to say, it was a very strange room to sleep in.

The dolls were far from creepy, however. They were quaint and old-fashioned looking, like benign artifacts from a simpler time. They also weren't very realistic looking. It was all about keeping busy and making something and not about having a private armada of little fake people or an idealized artificial family. I don't think she even cared all that much about them after they were finished.

Modern baby doll collecting frightens and bewilders me like little else in this absolutely insane world. Sadly, and at much detriment to the integrity of all mankind, it appears that there is a substantial market for people wishing to accumulate vast reserves of fake babies. The idea of collecting realistic baby replicas is something that I can scarcely comprehend without feeling a rush of emotions, from sadness to anger. I can understand how a young girl might enjoy playing with a baby doll, but for adults to do so is most certainly symptomatic of a compromised mental state. I can't help but wonder if these are the same sorts of people who keep miscarriages in the freezer for months, refusing to let go and move on.

I thought we might take a look at some of these high quality fake babies. Perhaps you, in aspiring collector of artificial infants, might get some ideas as to where to start your collection. 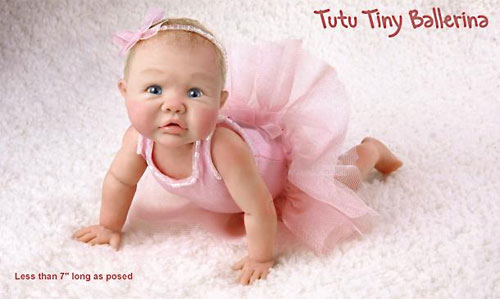 Nothing says "adorable" quite like a baby with a tormented facial expression. Tutu Tiny Ballerina is sporting an expression that can scarcely be defined. With a moment's notice, her mood and temperament could swing in any direction. Is she horrified? Is she about to cry? Is she confused? Is she about to smile? If she were real, any of these possibilities could become a reality. It's some serious quantum mechanics shit in doll form.

In a way, a doll like this would keep you in a constant state of agitation. Tutu Tiny is a never ending source of frustration and angst. She is an awesome mind puzzle, defying definition by lingering in the margins of uncertainty. But you know what? When I look at little Tutu Tiny's face, I see past all that. I see pure horror. This is a baby with the blood of the world on her hands. Look in her eyes and tell me that you don't see the same horror I do. 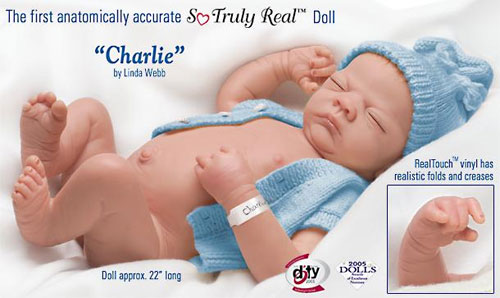 When purchasing fake babies, I'm often disappointed by the lack of genitalia. Honestly, if you're not going to bother molding a tiny baby penis, then don't even bother. Just get out of the business, because you don't have the heart to deliver the goods.

Charlie, aside from having a RealTouchTM penis with realistic folds and creases, comes complete with a stylish blue sweater vest and hat. Unfortunately, the baby they encased in plaster to use as a mold died mysteriously, so Charlie has that "He's with God Now" look about him. His deathlike state is beautifully accentuated by a discomforting lack of breathing motions, making him a lovely living room decoration or a fine addition to any quality fake baby display case.