THE VOTES ARE IN! OUR NEXT PRESIDENT IS...

The final vote count came in at around midnight and no one spoke as I crossed the press room. The air was cool and plasticy, like the exhalation of a prosthetic colon that had been refrigerated very recently. All around me, people were hugging each other or shaking their heads in disbelief, depending on which douchebag they had been pulling for.

Stepping into the women's bathroom with a hard-on the size and approximate shape of a Chicken McNugget, I propped one leg up on the tank of a toilet and angled my stubborn member at the bowl's lid. "Come on, you silly son of a bitch," I whispered angrily, but no urine would come.

I briefly considered threatening it with violence, but no. That would do no good. What if it still didn't comply and I didn't follow through with my threat? Any leverage I might have once had would be lost forever. (continued in Politics 2B)

As the list of cities that had to be notified to immediately evacuate came in from the Department of Defense, the peyote began to kick in.

"Hey," said a coworker who may or may not have actually been there. "You done with the floor? Gonna need it for a few."

How could he borrow the floor at a time like this? Didn't he understand that I had to notify the public of these nukes immediately? If I didn't, millions of lives would be lost or at the very least inconveniently irradiated. This was the most important story I would cover in my lifetime, assuming no more white females managed to disappear before my retirement.

I responded to his inconsiderate query by meowling like a kitten until I could no longer distinguish my voice from the sound of the rotation of the Earth. This sound, as it turned out, was transmitted at exactly the right frequency to place me in a deep slumber, from which I would awake in the changing room of a skateboard shop approximately thirty miles from the office. (continued in World 2D) 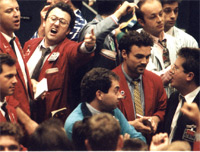 The financial world was buzzing. As a handful of the biggest corporations in the world were plummeting into obscurity, two I.P.O.s that no one had ever heard of before last week were destined to take their place and rise to unprecedented heights. Thousands upon thousands of investors were about to lose their life savings unless they sold their stocks, while a fortune was waiting to be made for those lucky enough to get in on the ground floor of the up-and-coming companies.

It was my job to deliver the specifics to my readership so they could make informed financial decisions that would impact their lives in a major way for years to come. They needed specifics. Company names, stock prices, financial figures. It was essential that I report it all as soon as possible.

I contacted Richard Branson, who advised me to join him for a hot air balloon ride across the country with a shitload of martinis so that we could properly assess the situation from a better vantage point. Branson, as always, kept a .45 revolver tucked away in his shoulder holster. He would occasionally produce the weapon and fire it to punctuate a point while discussing a topic he felt strongly about, such as how huge elephants really are compared to how much credit we give them for being large.

That revolver took on a much more significant role when our balloon drifted off course and deposited us in the Cahulawassee River deep in the woods of Georgia. (continued in Business 4C)