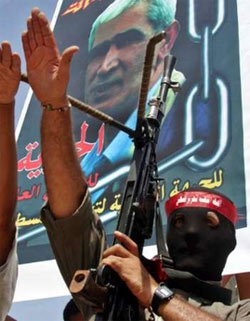 Sieg Heiling in Israel?If the world were a class in junior high school and the kids in the class represented nation states, then Israel would be the pimply-faced nerdy quiet kid who does really well on all of the tests but is hated by everyone. People would beat him up, but he's got a big brother on the football team named Chet America who occasionally pops by to tell the class that if they touch his little brother then they are fucking dead after school. Once in a while the kids pick on Israel anyway, but he is a scrappy fighter. Egypt, Syria and Iran have all had their share of surprise bloody noses from Israel.

Israel would get by well enough if he didn't have a freakish conjoined twin named Palestine. Palestine is just like half of a face - a few teeth, an eye, maybe a nostril - and a couple fingers stuck on the side of Israel. Palestine doesn't actually get to decide what Israel does with their shared body; he just sort of sits there and makes this creepy clicking noise with his half-formed throat. Occasionally Palestine will get really mad and curl one of his fingers around and jab Israel hard while yelling "GOD IS GREAT! DEATH TO ISRAEL!" Israel doesn't really care for this very much and it certainly is not going to help him get a date to the spring dance. Besides, if god was really that great he wouldn't have made Palestine half a face stuck to Israel's side.

Well, that kid named Israel recently underwent a procedure to give Palestine his own miniature little meat body. It is a long process involving a lot of surgeries and hormone treatments. You could say it's sort of like having a sex change, only with fewer shady Brazilian doctors and more pressure from Chet America and the big goofy class president the United Nations. One of the big steps in this procedure is letting Palestine decide what to do with itself. A couple days ago Palestine decided that it hated Israel more than ever.

Back in the world outside of my forced metaphor, the Palestinian people recently decided the shitty Fatah party was doing a shitty job with their shitty hunk of land and they elected the even shittier Hamas party. To give you an idea of how bad Fatah was, it was started by recently-deceased and still-hideous purpling frogman Yasser Arafat. The guy who wanted to bathe in the blood of the Zionist oppressors had his party voted out of office only to be replaced by Hamas. Those guys want to bathe in the marrow of the Zionist oppressors.

To give you an even better idea of the huge difference between Fatah and Hamas, take a look at their snappy logos and the accompanying descriptive captions courtesy of wikipedia:

Delicious irony for this catastrophe comes courtesy of big bro America, who sponsored the elections in Palestine that resulted in Hamas being voted in as the political majority. What was America's response to this surprise turn of events?

"I have made it very clear, however, that a political party that articulates the destruction of Israel as part of its platform is a party with which we will not deal." - Da PrEz

Except, of course, Fatah. The United States spent over 500 million dollars bolstering the support of the Fatah government in Palestine and had high hopes that they would sweep the election. Hamas is a wild card. Can their bloodlust be reined in with enough money as was the case with Fatah or will they rebuff American payouts and suicide bomb their way to the top of the charts?

With Israeli Prime Minister and lard mountain Ariel Sharon out of commission the new government is approaching things cautiously. After this many suicide bombings I think most Israelis probably approach reading a book cautiously. They're not saying "no" to further negotiations just yet. Personally, I think the Israelis and Palestinians have to find some interest they can share that can motivate them both. Hamas has demonstrated that nothing motivates quite like hatred, so why don't they find something they can hate together? Hating Israel is no good for Israel and hating Palestine is pretty much out of the question since even Israelis are trying their hardest these days to act like they don't hate Palestine. Hating the United States would be a pretty good choice, but it's a little too bandwagony. Everyone else in the world already hates us and I don't see China cozying up to Taiwan.

Hating ethnic groups is probably the best route, but these days hating an entire ethnic group is considered a bit unsavory. You can hate Francophones, but again, everyone already hates people who speak French to the point that they actually dislike people who learn French as a second language.

Gypsies are a good choice, because they're only really an ethnic group to fat goth girls who smoke clove cigarettes and like to romanticize their coarse Eastern European facial features. The thing is, it's hard to get worked up about gypsies. When was the last time you saw some woman in a silk head scarf with smoldering eyes pawing a crystal ball and talking like count Dracula? Probably at least a month ago, maybe two or three. Yet there is a group of people, like gypsies but not gypsies, who travel the land and are immediately distrusted. Where they wander, trouble is sure to follow. No, not truck drivers, although they're pretty horrid as well. I'm talking about hurricane Katrina refugees. 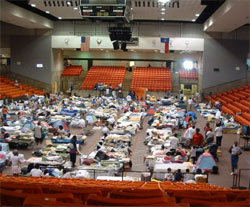 What better way to find homes for these poor souls and simultaneously accelerate the Middle East Peace process than to give the hurricane Katrina refugees a tract of land between Israel and Palestine. Throw in a few holy sites within their domain and maybe leave a few warehouses full of mortars or rockets and you've got yourself a nearly instant solution to the rift between Palestine and Israel. I can only imagine the sort of fatwah that will be issued when Ron-Ron of the NOLA White Moffya decides to spray paint a giant penis on the Dome of the Rock. There will be street musicians busking with overturned plastic buckets in the streets of Megiddo and a guy drunk on forties of Lazer relieving himself on the Wailing Wall.

The Israelis and the Palestinians will suddenly realize that they have a lot more in common than they had thought. Specifically, they will find that they share a hatred for hurricane Katrina victims. Just as well, since all of the money earmarked to help the Katrina refugees ended up lining Fatah's pockets and getting Hamas elected in the first place. We would be killing two groups of dissidents with one stone.