Well hello there, my good Internet friends! Did you miss me? No? Well fuck you then!

Welcome to the first leg of my year-long journey around the great country of America. As you may already be aware, I have stepped down from my prestigious position as a weekly front page writer to engage in the noble pursuit of collecting welfare and spending it on delicious crack cocaine. No, I’m sorry, that was plan B.

On the last Thursday of every month, I will be updating you good folks on the progress made in my travels. I have set out to traverse this sweeping nation, to spread incurable viruses and the good word of the Internet wherever I happen to roam. Like the early nomads that conquered this land thousands of years ago, I will travel wherever the wind takes me or wherever has the cheapest airfares at the time.

Why was I hand-picked by Lowtax for this daunting task, you may ask? Well for one thing, Livestock is under house arrest for installing a satellite dish on his car without a permit, and Zack Parson’s ears rupture at high altitudes. I was the next logical choice since my cache of Steve Perry jokes was getting stretched thin and I obviously needed a break from the fast-paced lifestyle of an Internet comedian.

I was notified of this new position with a pink slip of paper, which granted me the freedom to explore at will and with little or no pay. Like the caged songbird, I have been set free into the open sky, only to electrocute myself on power lines.

Everybody back home is giving tons of support for my departure, almost seeming aggressively eager to get me out of their lives. My town even threw a huge party that ended with various drunken speeches applauding my decision to leave them, so that the area might grow and prosper -- unhindered by the mysterious fires that had grown in frequency since I hit puberty.

As the ambassador of the Internet, it is my promise that I will represent you folks in a positive light, and help obliterate the ignorance and hate that keeps this medium hidden in the shadows. To this end, I have outlined a mission statement that I intend to follow to the letter while on the road. The entire thing has been tattooed on my belly so I can look into mirrors everyday and remind myself what I have set out to achieve. It will be like the movie Memento, but hopefully less confusing. (Spoiler: Teddy gets shot at the end.) 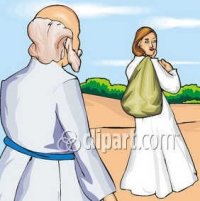 I made this image myself and did not steal it from clipart.com despite the rumors you may hear.

I, Reidly Frolixo Edward Paskiewicz, swear fealty to the holy trinity of Internet comedy -- the Bandwidth, the Webmaster, and the Fart Joke -- so that I might serve with honor in the face of the enemy. I am bound to abide by these rules during my noble Dragon Quest:

I will conduct myself in a manner befitting a royal ambassador of the Internet.

I won’t give up my seat and move to the back of the bus.

I will be belligerent when approached by children with questions for which I have no answer.

When I see somebody trying to change a tire on the side of the road, I will stop to help them. Since I don’t know how to actually change a tire, I will offer my Wiccan magickal love spells instead.

If I see a minority coming towards me on the sidewalk, I will not run in the other direction, and instead engage them in verbal communication and learn about their strange and barbaric culture.

I will tip my waitresses 17% if they refill my coffee more than 3 times.

That's right, go ahead and make a "Frolixo is a fatty" joke.

While traveling through the country, most of my time will be spent visiting schools to give speeches on Internet etiquette and the dangers of trolling. For a few months out of the year, I will be staying at a drug rehabilitation center, teaching the patients computer hotkeys and kicking my habit of freebasing Nerds. When not teaching, I will find towns in need of a hero to fight off evil fat cat bankers who want to demolish their homes to build a Gameworks. I will rent a motorcycle with a sidecar and hire an Indian sidekick who makes me look good. To this I pledge.

Since these special updates will be once a month, they will be presented in a special travel log format: presenting the events as they took place, based on my notes. The month of January is low on action, but that’s because I am just getting started, and must get all my affairs in order as well as escape my crafty landlord to dodge back-rent for 2005. Next month the tour will be in full gear, and I will be knee-deep in the red, white, and blue fecal matter that makes up this great nation. Let’s get this pony show on the road!

January 15th
Failed to find reliable ponies for the pony show. Also they were too expensive and afraid of my WW1 German spiked travel helmet. I will continue without them.

I finished getting all my shots and vaccinations, as well a very painful pap smear. Then I packed all my bags, burned some mix CDs, and loaded the Winnebago that I bought from a Swede for $300. Tomorrow I am leaving for the first destination on my tour: Chicago.

January 16th
Disaster. The Winnebago won’t start. It was running yesterday when I bought it, but I think it was already running before I got there and he probably jump-started it. I am trying to call him, but he turned off his cell phone. Never trust a Swede.

The tour is over. I am going to write an email to Lowtax to see if he will let me back as a full time writer.

January 17th
Lowtax replied that my unprofessional method of resigning from the writer position (taking a large steaming dump on the hood of his new car) is the deciding factor for him not considering taking me back. He told me that I better get my ass on the road for the Internet Tour or he will send a local goon to beat me up.

With this new development, I am now looking for a cheap flight and forgoing my original idea of driving cross-country.

January 18th
I found a flight! It is leaving in 3 days for San Diego. I decided to start my tour from the other side of the country and work my way back. This is gonna be awesome!

This is the closest I've been to getting laid in years.

January 20th
Leaving tomorrow. Right now I am playing Dragon Quest VIII for PS2. My guy just reached 16th level and learned a new sword ability. I was a big fan of the original Dragon Warrior and think that this game is great. I kind of feel bad killing the slimes because they are so cute, but I keep reminding myself that they are diabolical and are getting what’s coming to them. I have spent the last couple hours just role-playing in-game and coming up with my own storyline. I also like to switch the lineup and look at that one chick’s boobs from different angles.

January 22nd
I missed the flight! I was so entranced by Dragon Quest VIII that I totally forgot I had a 9:30 AM flight yesterday. Shit!

I bought insurance for the tickets so I am looking for another flight. I’m planning on packing my PS2 so I can play this game while on the tour.

January 23rd
Found a flight leaving for San Diego tonight at midnight! I have never been to California and I’m really excited. I hope when I step off the plane there will be movie stars and earthquakes waiting for me. I’m not really sure of what I'll do when I get there, but I guess we’ll just see what fate has in store for me. 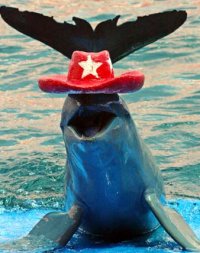 This once proud and noble creature of the sea is now exploited for our amusement.

Airports make me realize how much I hate people, and how they should all be wiped off the planet in the cleansing fire of a nuclear holocaust or swift smallpox epidemic.

The weather is warm and sunny and the girls are very pretty, unlike the post-apocalyptic scenery of my home town Detroit. I try to approach a group of pretty girls. but they can smell the failing car industry on me and scatter like pigeons.

As soon as I walk out of the airport I find a cab and tell him to take me to the place that needs the most help. We drive for about 20 minutes in the thick California traffic until he drops me off at Sea World. I pay the cab driver with a gift certificate to Bed, Bath, and Beyond and walk up to the gates to get a ticket, prepared to do my part to help the ailing Sea World.

It was very large and filled with aquatic oddities that boggled the mind. One area was filled with a bunch of goofy looking creatures called penguins. Then I went to an outdoor tank and saw a huge animal called a killer whale. He was swimming around the tank and performing tricks for the cheering audience. It was only then that I realized that Sea World didn’t need the help, these poor whales did.

They belonged in the vast ocean but instead were forced to live captive lives in small holding tanks and perform tricks for ignorant humans. I ran up to the edge of the tank to try to figure out a way I could free the poor beast and let it swim into the ocean that was only a few miles west.

Just then the whale lept high in the air and came down in the water, sending a wave over the wall and soaking me to the bone. The crowd all laughed and jeered at my plight as I fled the area, crying all the way. I had had my mouth open when the torrent came down on me and had consumed a stomach full of the foul tasting liquid.

I found a cheap motel nearby and retired to the bed, weary from the travel and the incident at Sea World. I don’t feel well and think it might have something to do with the whale water in my belly.

January 25th
So sick. The bacteria from the whale water is in my blood and brain cells. I am not doing well and can’t move my legs. If I don’t survive, cherish my memory, and tell Lowtax that I love him in a manly, confusing, “Brokeback Mountain” kind of way. Alas...I fade away...

January 26th
I’m starting to feel better and now can breathe without the help of a kindly robot machine. I’m in the emergency room at the San Diego hospital at the moment, sending this update to the SA servers remotely via PDA. If I am ever able to walk again, the tour shall continue next month. I plan to explore California and wander the desert in search of my spirit animal and catch some lizards. Stay tuned, my dear friends. Pray for me.

Ragtime Piglet: Mr. Capone I would like to opt out of my contract for your nightclub.