Sports Clinic: Give Me a Break With All These Weird Sports

If there's one thing I love about sports, aside from the outer space woodchuck physicality of Sam Cassell, it's learning about a new sport. You'll all recall the article from last year in which I detailed my discovery of the Tour de France, which means "Tour of France" for those of you like me who only speak the one language. Hey, my bad! I knew what it was, just didn't know what it was called. Well, I've been learning a lot more about some of these new and foreign sports and I've got to say a big, fat, NO THANK YOU.

These games aren't sports, they're weird and different and barely make any sense. I'd like to mention a few that have left me baffled. 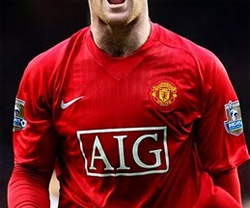 Did I mention the uniforms? Notice anything terrible about this one? The answer is "everything." I started to get sucked into World Cup Fever again, but I came to my senses after watching one of these stinkers. Great game, fellas. Sit down for 90 minutes to watch guys run around in shorts not scoring, taking falls to pretend they're injured, and then the game ends in a tie. A TIE? Really. I pay my money to see teams win games. The Dallas Cowboys. The New York Yankees. These teams win games, they don't tie games.

And what's with all these weirdo countries playing? I can't spell your country, I'm not watching you on TV, and there's a lot of countries I can't spell. Great Britian or Great Britain? Make up your mind! CLICK.

Even the World Cup finale was terrible. 0 to 0 for 75 minutes. What a thrilling confrontation between two countries I've never heard of. Spain? Didn't they have an Armada back in the 80s? Right. Which was exactly the last time anybody cared about SOCCER. And the penalties, don't get me started. Red cards, yellow cards, blue cards. How about telling me what any of this stuff means. They don't even keep an official clock! It's a timed game and they don't keep an official clock. It's like cave man days.

Oh, and those horns? The voodoo things? Love them. LOVE. THEM. One redeeming thing about soccer. I bought one for my kid and he brings it with him everywhere in the car. I just tell him to go to town on that thing in his car seat. It's like driving around inside a Tuvan throat-singer. Makes the line at the grocery checkout fly by too.

Building a laser? Nope, just trying to figure out that hockey call.Don't get me wrong, I love a good hockey fight, they're what we're all at the game for, but I have to give a big thumbs down for hockey. It seems simple. One team chases a ball (called a puck in hockey) into the opposing team's goal. The catch is that they're wearing ice skates and on ice. Good so far, right?

Too bad hockey is impossible to understand. Players change on the ice every 30 seconds or something. You can't cross this line, but you can cross that line. Hitting the ball across multiple lines is a penalty. You've got a goalie, but if you want to you can take out the goalie and put another regular player in. It's too much to keep track of.

Forget about watching hockey on TV. It's impossible to keep track of the ball. What happened to that comet trail thing hockey had a few years ago? I LOVED that thing! It was colorful and made the game so much clearer. My advice: dump some of these crazy rules and bring back the hockey we love: with the comet.

You might remember this game from the playground, but believe it or not leagues have been forming and I have been seeing some games show up on one of the ESPN channels you can only get if you know a wizard. I remember playing this as a kid in the little gym at my middle school and the rules were simple: dodge the ball, if it hits you then you're out. Nowadays they have all sorts of rules like if you catch the ball the guy who threw it is out. Huh? This isn't Catch Ball, it's Dodge Ball. How about you guys stick to the fundamentals instead of ruining a classic game. 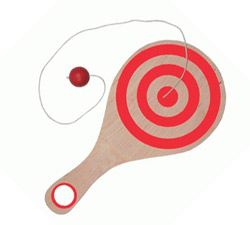 Huh? Do I put it through the hole or try to hit the target? These things are worse than a Rubick Cube.Ball and Paddle

This solo sport is really catching on and was introduced to me by a kid at the Hallmark store at the mall. The idea is you have a wooden paddle and a ball is attached to it by a rubber band. The object of the game is...uh...I don't know? There are no instructions on the paddle and the guys I have seen playing it are hitting the ball so fast it's impossible to keep score. I know you guys are hotshots, but how about slowing things down so we can see what's happening. Said on the paddle it comes from China. Those people love this sort of BS. Pass!

Really? Swimming? This is a thing you do when you want to get around a lake, not a sport. Maybe the people who run the Boston Marathon can start calling running a sport. Who watches this? Not me, not anyone I know. Are there rules? Is there any sort of point? I see guys lining up and swimming, but why? Where is the goal? How do they score their points? Couldn't someone just run around the outside of the pool faster than they can swim and score a point that way? I'm sure that's against the rules, but I don't see the rules explained anywhere. Another big misfire from international sports.

Try to imagine Mattingly swimming. There's no way. These guys shave their eyebrows and you have to wear bikini pants to swim. Donnie Baseball wouldn't shave off his cooter brush or the backyard party to win a swim if there was a pile of ice and wine coolers on the far side of the pool. I'll go with Mattingly on this one. Not. A. Sport.

Luckily we don't have to watch any of this stuff, because we've got Baseball, Football, and to a much lesser extent, Basketball. The Three "Bs" I like to say. Maybe one of these days the rest of the world - I'm looking at you, Great Britian - will grow up and realize that football means throwing the pig skin, not kicking around a panda ball and faking injuries.