America, our biggest biennial holiday is almost upon us! Foreigners may be a bit perplexed that their American Internet pals have suddenly become cranky and opinionated assholes, but that's because it's Election Eve here in these United States. The ghosts and ghouls are parading through the streets and everyone is wondering whether Democratic necromancers will be able to defeat the Republican cyborbrain this holiday season.

The Republicans have prematurely conceded defeat in the House of Representatives, which means the real fight Tuesday will be over a handful of Senate seats. The Democrats need to post a net gain of six seats to be able to take back control of the Senate, and with several photo-finish races it's possible, but it's not going to be easy. Today we'll provide a look at the four key senate races and let you, the probably-not-going-to-voter, decide if anyone is worth putting down the bong long enough to go vote. 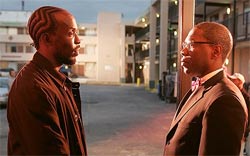 Brother Mouzone read a great article in the Atlantic about Cardin supporting stem cell research. Representative Ben Cardin (D) faces off against Lt. Governor Michael Steele (R) in this open seat race. Ben Cardin defeated a black NAACP-backed Democrat in the primary, which could spell trouble for the Democrats as they're now forced to face off against GOP black-golden child Michael Steele.

Viewers of The Wire should know that Maryland includes Baltimore; a city completely overrun by black drug dealers and homosexual black Robin Hoods with shotguns. In a surprising twist, it will be Democrats for once thanking their lucky stars that black people don't vote. Cardin leads Steele in recent polls by five points, due in part to a hilariously misjudged attack on martyred Parkinson's saint and Cardin backer Michael J. Fox. Steele, trying to balance on a rickety platform of "Democrats love tax and spend" from his mansion in newly christened Debtlandia, is hoping hateful goblin Rush Limbaugh fades out of the Polaroid before Election Day.

My Pick: Steele has been weak on issues and dealing with the double-edged sword of national attention from the GOP. With morons like Limbaugh weighing in to Steele's detriment, I think Cardin will coast to a reasonably comfortable victory, thanks in no small part to enough black voters being smart enough to pick issues over skin color. 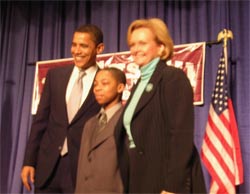 Claire McCaskill poses with magical vote fairy Barack Obama and an adorable black. Impossibly boring incumbent Jim Talent (R) faces dull Democratic challenger Claire McCaskill in one of the least exciting Senate races of the season. Talent barely won his special election in 2002, in which he took over for decaying Senator Mel Carnahan (D). Republicans have a tenuous grip on Missouri and McCaskill's attempts to out-boring Talent have given her a fighting chance. Recent polls show her moving ahead of Talent by three points.

With the dull campaign behind us, the real excitement is finally about to hit as both Republicans and Democrats pull out all the dirty tricks in one of several states known for dirty tricks. Democrats have already been blasted for attempting to keep dead voters on the rolls and one can expect a Republican disinformation campaign in an effort to put the spookers on immigrant and minority voters. Ah, democracy!

My Pick: Missouri is a toss-up. McCaskill leads narrowly but the Republicans are better than the Democrats at getting voters to the polls. In a race defined by tiresome retread issues like abortion, this one is probably going to see a lot of issue voters heading out to vote their Bibles and give Talent a boost. Military families have also probably been discouraged from voting Democrat by the imbroglio over John Kerry's now-infamous Worst Joke Ever. While I don't buy the Republican's line that he was intentionally disparaging the troops, I don't blame voters for being offended that anyone would attempt such a shitty joke. I call this race for Talent, but it's going to come down to late night returns and I can always edit this sentence later so I don't look like an idiot when McCaskill wins. 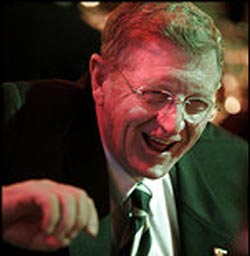 *Makes some fukken sweet witch cackling sounds* If ever there was a clear choice for who should win, it's to be found in Montana. In 2000 and 2004 Montana was redder than blood, going for Bush by nearly 20 points, yet incumbent Conrad Burns (R) scarcely won reelection in 2000. He is a corrupt moron cut from the same cloth as people like Ted "Internet Tubes" Stevens, and it's frankly amazing he hasn't been sent to prison yet. He is closely linked with lobbyist Jack Abramoff and he has repeatedly made stump speech gaffes that had his campaign managers breathing into paper bags to keep from passing out. For example, in July of this year Burns made comments to the media blasting volunteer firefighters as incompetent and lazy after they extinguished a wildfire in Montana.

Oh, yeah, his challenger. Well, Burns is such a carnival sideshow of idiocy it's hard to even notice crew-cut and earnest Jon Tester (D) on the campaign trail. Tester is no genius, but he seems to possess the basic human skills of self-preservation that Burns lacks. Tester was trouncing Burns by double digits for weeks, but recent polls show Tester leading by as little as a single percentage point. I guess Burns closed the gap with that debate where he fired off all those incoherent zingers, like when he told Tester that the President has a plan to succeed in Iraq, but that they weren't telling Jon Tester because he would "go out and blow it".

My Pick: Tester has been running on an anti-war platform, when honestly he should be running on an anti-Burns platform. How any self-respecting voter could walk into a booth on Tuesday and vote for Burns mystifies me. If Montana elects that moron for another term they deserve what they get. Luckily, I've got more faith in Montana than that and I'm picking Tester to squeeze by with a single percentage point victory. Burns can probably retire from politics and get a book deal out of being picked by Time magazine as one of the five worst Senators in America. 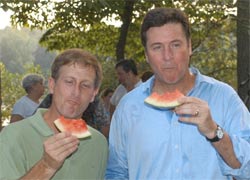 Allen proves he is not racist by eating watermelon in front of penned negroes at this whites-only barbecue. The brutal race in Virginia is easily the race that has received the most national media attention. Republican incumbent George Allen has been running a campaign that has been as incompetent and marred by apocalyptic missteps as Burns's, but unlike Burns, Allen seemed to be a shoe-in when the race began. Since the summer he has sunk steadily in the polls against challenger and Vietnam Veteran Jim Webb. The GOP has dumped stacks of cash into this campaign to keep Allen afloat, but Allen seems intent on poking holes in his RNC-financed rubber dinghy.

Allen's half-crazed decline began in August, when Allen used an obscure racial slur against a Webb campaign volunteer who was videotaping him. Democrats managed to make a mountain out of a macaca-hill in no small part because Allen pretended to have made the word up. When it became clear that he knew exactly what he was saying, the scandal erupted anew and Allen's poll numbers took another hit.

That was just the beginning, as Allen made a series of bizarrely racist comments about his own mother's Jewish ancestry, was accused of spitting on people, and faced allegations that he repeatedly used the word "nigger" in his not-so-distant past. While the Allen campaign threw up denial after denial, a lot of people just scratched their head and wondered why he didn't just admit to saying "nigger" a long time ago and then apologize.

Things have gotten so bad for Allen in the closing weeks of the campaign that he has sworn off all media appearances, relying on his ads and carefully-screened stump speeches to get the word out. Against another opponent Webb might have seemed saddled with scandals, but against Allen he is beginning to look to Virginians to be the only rational choice.

My Pick: This is the deadest of dead heats and Webb's hard-won lead is still within the statistical margin of error. The Republicans have pulled out all of the stops trying to salvage Allen's disastrous campaign and that will no doubt extend to Election Day. Political commentators like to talk about the Republican "ground game", but in a race this close it's more likely to come down to who has a better selection of dirty tricks. Expect automated callers, flyers with false election rescheduling and possibly electoral fraud. I'm calling Webb as the rightful winner of this race, but I think if the Republicans are going to actually steal an election this time around, it's going to be for George Allen. 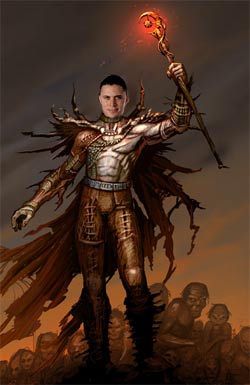 Arise, my undead minions, and vote for me! In New York, Pennsylvania, New Jersey, Rhode Island, and several other Democratic strongholds the Democratic candidates lead sufficiently for me to consider them near-locks. Loonyballs election-stealer Katherine Harris is getting her embalmed pussy punched in Florida by Democratic incumbent Bill Nelson and no amount of cooing in Sean Hannity's ear can save her now.

Connecticut, where DINO incumbent Lieberman was run out of the party by Ned Lamont in the primary, looks to be a lock for the Droopy Dog. Lieberman plans to caucus with Democrats on most issues, although he is still pro-war. In Ohio, Republican incumbent DeWine briefly reduced Democratic challenger Sherrod Brown's lead to a neck and neck race, but Brown's lead is nearly double digit again. DeWine is an okay guy, but a pall of corruption hangs over the Republican Party in this battleground state and jobs numbers there frankly suck. Brown is a pretty safe bet.

The Republicans are killing Democrats in solid red states like Utah. The big Republican win in the run-up to the election has been in Tennessee, where a tight race between ultra-conservative Republican Bob Corker and ultra-conservative Democrat Harold Ford has finally fallen in Corker's favor with a double-digit lead. Corker and the GOP came under fire for running a campaign ad that Democrats claimed stoked fears of race mixing. The ad featured a ditzy blonde white woman enticing Ford to "call me" as a voice over mentioned his visits to the Playboy Mansion. What, you mean they picked a ditzy blonde woman to represent Playboy girls? Those racists! Ford didn't deny the visit to the Playboy Mansion party and, in a hyper-religious state where the Playboy Mansion is like the dread fane of a satanic cult, the damage was done. It probably didn't help that the perpetually-scowling Ford actually looks like an evil wizard from a fantasy movie.

Despite the last-minute hay made over Kerry's overblown goof, the Democrats are still set for a strong showing on Tuesday. Will it be enough to take back the Senate? My prediction for the final tally is that the Democrats will split the Senate, with hateful grandpa Cheney as the deciding vote. It won't be the clean sweep they were hoping for, but after years of total Republican dominance I think it will be nice for most Americans to finally have a two party government again. It will certainly change the tone of Washington for the last two years of the Bush presidency. I'm sure the Democrats will totally clean up all that corruption. Finally and forever!