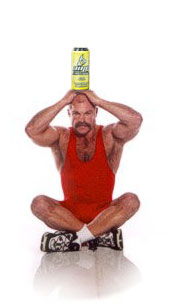 CAN you HANDLE the EXTREME ENERGY?!?Garbage Day: I can't really accurately describe the level of enthusiasm I experienced upon pouring this drink into a cup and realizing it resembled a saucer of neon-yellow melted "butter" from a dubious seafood buffet. The label promises "lightning," so I was expecting to suffer a wrathful Zeus chucking a bolt of pure electrical vomit down my throat. At the very least, I hoped I might receive a mild static electricity charge when it attacked my tongue. Instead, Amp Energy Lightning ended up tasting like grainy Gatorade, with poorly dissolved powder-mix crystals floating in flat Sierra Mist. I'm no meteorologist, but I'm fairly certain that's not the universally accepted definition of "lightning."
RATING: 5 / 10

Lowtax: Up until recently, lemonade's major drawback has been its inability to dissolve the skeletal remains of homicide victims. Amp Energy Lightning has discovered lighting in a bottle in a can with this creation, although consuming actual lightning would probably be healthier and less dangerous than swallowing down an entire can of this mess. I suppose it tastes relatively good considering it's not composed of a single naturally-occurring chemical, and you'd receive greater health benefits by consuming the can itself.
RATING: 6 / 10

Garbage Day: According to urban legend, the aroma of freshly brewed coffee can make a person feel pleasant and alert. One whiff of Lo-Ball (whatever the hell that means) confirms: this ain't fucking coffee. It tastes stale, like someone waited several days to empty the drip tray underneath a convenience-store cappuccino dispenser that was previously used to store cigarette butts and oil-soaked rags.
RATING: 6 / 10

Lowtax: I find coffee to be absolutely revolting, so my expectations were quite low when I popped open this drink and felt my face enveloped in a wet catcher's mitt of rancid high fructose fake coffee particles. My disgust quickly morphed to pleasant surprise after I took a sip and realized this sludge doesn't taste nearly as horrible as coffee! Then my pleasant surprise morphed back into disgust, but hey, it was an enjoyable three seconds or so.
RATING: 7 / 10


Garbage Day: "Caution: Poisonwerful!" Imagine a Roman nobleman having grapes dropped into his mouth by a fawning harem. Now replace those concubines with hairy-chested brutes force-feeding him purple Filntstones vitamins until the Fred and Wilma particles flood his lungs and Barney Rubble ashes begin tumbling from his ear canal. That's what's going on here.
RATING: 6 / 10

Lowtax: Well this jug of shit certainly beats the hell out the competition in terms of raw stimulants (2750 mg of taurine, 343 mg of caffeine). It also leads the pack when it comes to resembling that generic Halloween grape-flavored candy old widows hand out because they're too stupid or dead to buy real candy. Maybe they should change their company's slogan to "JUST SAY NOS."
RATING: 4 / 10

Lowtax: "Boy, what an enjoyable experience that was!"

Garbage Day: "Maybe next week we can spend several hours kicking each other in the skull until fluid begins leaking from our noses!"

Lowtax: "As long as we get to write about it! On the INTERNET!"