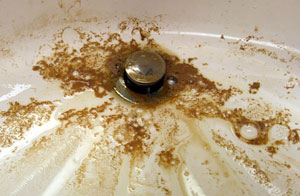 TASTE the RAW ENERGY!!!Garbage Day: Despite sharing the name of a robotic vacuum cleaner, Rumba actually had an enjoyable taste! It's like Five Alive, assuming this mystery potion actually contains any of the vague, possibly fictional fruits depicted on its carton. Since my brain had rejected the outlandish notion that an energy drink could taste normal, it was forced to willfully disregard the copious amounts of caffeine smuggled inside. After Rumba-ing for a couple minutes, I began to feel incredibly sluggish and filthy, as if I spent the last hour wrestling death inside a public toilet. If I had actually consumed more than a shot, I'd probably go into hibernation. Rumba comes in a particularly tragic shade of orange, like the hue of a stillborn tiger cub.
RATING: 8 / 10

Lowtax: I initially met Rumba's "100% JUICE" assurance with skepticism, because technically you can produce "100% JUICE" by crushing a baby in a garbage compactor. Technically, my balls make juice. Fortunately, Rumba's juice didn't taste like a human being's sex-parts, as it mostly resembled one of those things that grow on plants or trees and you can pick them and eat them with your mouth (I can't think of the word offhand, it's something that rhymes with "fruit" except it starts with an "f"). If you like orange and pineapple, yet you lack the time to devour a bowl of raw taurine, Rumba will fulfill your needs (the non-sexual ones).
RATING: 9 / 10

Garbage Day: Samba packed a scary aftertaste, which I'm attributing to the cranberry juice concentrate, not the vengeful toxins from the deadly-sounding "cynacobalamin." While searching for "samba," my scientific research led me to the Wikipedia page for "samba (dance)," which included such helpful phrases as "bellybutton-bumpy trump" and "gross representation of the sexual act" in its opening section. I'm extremely grateful the Samba drink tasted nothing like navel lint or hormonal secretions.
RATING: 7 / 10

Lowtax: Oops! Looks like somebody on the energy drink assembly line dropped a tube of lipstick into the chemical vat! Despite this minor setback, Samba still rises above the competition, although that's like saying the retarded kid who drools constantly and chases jet streams is more fun to hang around with than the boy with Aspergers and an addiction to removing the skin from human faces.
RATING: 7 / 10

Garbage Day: I'll be the first to admit I had a preconceived bias against suspicious-looking black sludge prior to Tango. After opening this can, I feared the drink would overtake my central nervous system and turn me into one of the evil homeless people from Condemned 2. Fortunately, my taste buds and sanity were saved by Tango's elderberries, which were quite refreshing and slightly less deadly. Since elderberries apparently taste fine, there must be one reason they're not used to flavor more beverages: blatant age discrimination.
RATING: 8 / 10

Lowtax: In "Tango and Cash," Sylvester Stallone wore glasses so people in the audience would know he's smart. Nearly twenty years later, he starred in "Rambo 4," where he crushed some dude's head with his own hands. I'm having a difficult time merging these facts with an energy drink primarily composed of elderberry, so interpret that however you see fit.
RATING: 8 / 10

Garbage Day: Wow. Cocaine. I'm assuming here some strident anti-drug crusaders bottled the bilious drainage from a destitute junkie's throat and slapped a $2 price tag on it. I was originally prepared to rate this beverage a "2," maintaining naive optimism that a fouler concoction might possibly exist in some horrible alternate dimension populated by giant penises that try to fly up your ass, but the noxious fumes resulting from dumping Cocaine in a bathroom sink made me cough myself bloody.
RATING: 1 / 10

Lowtax: The most awesome aspect of Cocaine was its seemingly relentless, unholy attempt to murder us all. Upon opening the can, Andrew instantly began coughing. Upon drinking from the can, he nearly spit up. Hell, Andrew wasn't even able to empty the drink into a toilet without choking from the stench. Cocaine claims its flavor is "spicy hot," which is apparently secret scientific code for "tastes like shit." Seriously, this crud was nasty as hell, and its only practical use would be as a chemical weapon or the antagonist in a remake of 1985's "The Stuff."
RATING: 1 / 10