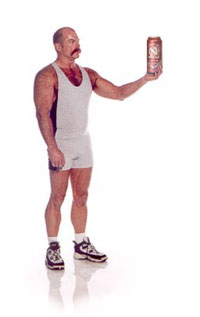 DRINK the ENERGY!!!Garbage Day: 180 Red's rotten-produce cocktail begins its journey through your digestive system as a merely terrible drink, but soon it undergoes some perverse fermentation of disaster, corrupting your mouth's ecosystem until you must shave your tongue with industrial sandpaper. It's drinkable decay.
RATING: 3 / 10

Lowtax: I suspect the "180" in this drink's name refers to the 180-degree turn an average consumer exhibits when purchasing it. "Hmmm, maybe this won't be so bad," Joe Stupid Shopper may think as he opens the can. Then he takes a sip. "Whoops, guess I was wrong. Completely wrong. So wrong that it would be accurate to claim the taste of this drink is in fact the polar opposite of what I had initially believed." Then Joe Stupid Shopper begins to turn red because he is dying and this drink is killing him. Now you know the origins of 180 Red.
RATING: 4 / 10

Garbage Day: Ooh, a citrus blast! I love those! 180's take on the classic meaningless "citrus blast" instantly evaporates upon impact with your tongue, transforming your taste buds into a sponge while wringing out all traces of its existence. This ultimately benefits the consumer, considering nobody would ever want to remember drinking a can of flatulent Sunny Delight.
RATING: 5 / 10

Garbage Day: 180 Blue is apparently for the folks who felt "red" and "citrus blast" sounded far too healthy and natural. 180's secret concoction of chemicals creates an odor resembling blueberries and grapes, soon after they've completed the digestive process and emerged as excreta. I suppose the taste of "Blue" isn't obscenely horrible (comparatively speaking), but without strong nose clamps, the average consumer may be smothered by the overwhelming sewage scent emitted from each can.
RATING: 4 / 10

Lowtax: I wrote down only one sentence of notes for this drink: "smells like a bird's nest stuck in a fat man's ass." That pretty much sums it up.
RATING: 4 / 10

Garbage Day: "Bloodshot" has a name sounding as if it was brewed by a team of witches in a medieval cauldron. "Bring me thy fruit of dragon and blood of orange, so we may concoct a potion which summons Casper Van Dein so he may battle the deadly TimeDragon!" Soy is listed among the ingredients, which I assume most truck drivers with "No Fear" decals would consider a pussy ingredient for faggy drinkers. To compensate, No Fear also included "wood rosin" in their drink, which sounds like something lumberjacks ingest by mistake and then sue for worker's compensation. This crap is healthy, and not just by the "non-lethal in small doses" standard of energy drink review. The No Fear scientists must have dissolved a jar of multivitamins in some ghetto orange drink, then smuggled this miracle elixir into a can decorated with a festive gang graffiti font.
RATING: 7 / 10

Lowtax: To be truthful and honest, which is what we're all concerned with here at Something Awful LLC, I feel I must mention the full name of this drink, "No Fear Super Energy Supplement Bloodshot." The truncated name above simply doesn't communicate the full level of amazing gay their advertising team strove to attain. Besides winning our award for the longest, retardedest name, this beverage additionally receives our coveted award for being "the only drink containing both blood orange and dragonfruit." Blood orange is like that blood diamond Leonardo DiCaprio kept trying to steal, only it's much easier to juice.
RATING: 6 / 10