This weekend sure was a potluck of exciting events! To sum it up for you:

1) SA's host loses power.
2) Servers naturally shut down. When power comes back on, SA forum server recovers but webserver does not.
3) Upon further investigation, webserver's SCSI disk containing all of SA is found to be corrupted and unrecoverable. I started re-uploading everything I had from the last backup to the forum server, which is now running SA's webserver as well.
4) Upon examining the SA forum server, I realized somebody had either swiped an admin password or hacked into the system and changed things. I shut down the forums while I changed every single password and went through the system to try and find what happened.
5) News system dies. I had to upload the last current backup of the news, which was dated June 13th. I'm in the process of piecing together the lost updates, most of which Zack hopefully has.
6) Somebody begins DoS attacking the forum server.

But things are better now. SA's about 95% caught up, and all I really have left to do is upload a few news updates that were lost during the crash / corruption. How strangely appropriate that it occurred at the end of "PROJECT: Go Away" week. Luckily there's a ton of new crap for you, the viewers, to enjoy! Something Awful: we suffer for your personal entertainment!

The mp3s from the hit Flash game "Dance Dance Karnov" are up and ready for download! Quick, everybody head on over and start grabbing the tracks! Since they're only 1.5 megs and contain some of the best dance music from a game that features a fat, balding, Russian guy with no shirt and nipple tassels, there's absolutely no reason for you NOT to grab these suckers. Plus each download mysteriously makes me money through mp3.com, so you'll get free music and I'll receive ill-gotten riches! We both win, although I win slightly more than you!

Use peer pressure and strongarm tactics to force your unwilling friends and family to download these songs! Hand out flyers advertising links to them! Get a tattoo that says "Blue's News Is For Pedophiles!" and then go back to the tattoo artist and demand he scratch that out and replace it with "Download Dance Dance Karnov mp3s!" Downloading these songs will cause your sexual performance to increase! Downloading these songs will allow you the power to see through walls and women's underwear and walls made out of women's underwear! Grab 'em now and make me the happiest webmaster this side of the Pecos, whatever side that may be.

Okay, well this isn't really entertainment, but it's another way for me to reap some more ill-gotten gains by enabling the community and listing my action items within a horizontal marketing infrastructure. I've put three drum machines of mine up for sale after I realized that I owned three drum machines and, in reality, I don't need to own ANY drum machines. I've listed my Roland / Boss DR-660, Korg Electribe ER-1, and Alesis DM5 for sale on eBay so you, the creative music villains you are, could bid on, purchase, and use them to make songs that utilize the lyrics "I want to shove my SCSI cable into your USB port." Here are links to the auctions:

This is a legitimate auction, so anybody attempting to be a shithead and ruin the auctions by bidding $15,000,000 will have their home address printed on every page of this website along with a detailed map leading to your trailer home. The people on the SA Forums alone could strip every inch of flesh from your body within seconds. All these drum machines must go! For the greater good! Bid like a madman!

Wow! I can't hardly believe it, but CLIFF YABLONSKI HAS UPDATED HIS SITE! That's right, five new pages of mutants and human failures from the shiny greasepit of Appleton City. Wonderful sex machines like the following fleshy gem are up for your approval: 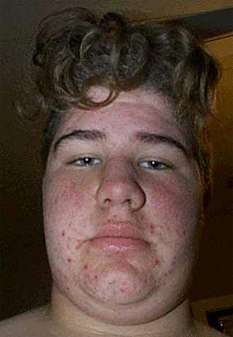 Sexy! Head on over now and check out the 30 new "people" that Cliff Yablonski doesn't really approve of!