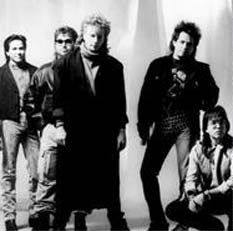 The band Toto did the music for the movie "Dune". They had nothing to do with the game, but I really hate them.Seeing as how I am a fairly large fan of real time strategy games and an even larger fan of the books and David Lynch film of Dune, I picked up "Emperor: Battle for Dune" last week. I had read in reviews that it closely emulated Westwood's classics "Command & Conquer" and "Red Alert" so I assumed I would find it fairly enjoyable. Based on my experiences in "Red Alert", where during every other cut-scene someone drank poisoned tea and flopped around on a table gasping for five minutes, I came expecting some horrible overacting and cheap set pieces intermingled with above-average CGI animation. I was not disappointed.

Here is a sample of dialogue from one of the scenes in "Emperor: Battle for Dune", it takes place near the end of the Atreides campaign.

Duke Achilles (Michael Dorn): THE GUILD HAS ATTACKED ARRACKIS! WE MUST GO! THEY MUST BE STOPPED! THEY ARE BREEDING A GIANT WORM FOR APPARENTLY NO REASON OTHER THAN TO KILL EVERYONE INCLUDING THEMSELVES!

Mentat (Tom Bosley): My Duke, I have failed you, I will tender my-

Duke Achilles (gesturing wildly): DON'T PLAY THE FOOL! WE WILL HAVE THE SMUGGLERS TAKE US, THE ONES THAT I HAVE MENTIONED FOR THE FIRST TIME JUST NOW. PLEASE JUMP UP AND DOWN LIKE I AM DOING.

Mentat (picking pieces of the set out of his teeth): Yessssss, the smugglers can take us there, you are a GENIUS my lord! (Turns to face the camera). Sometimes Maddie Hayes can be a bit annoying, but the girl has a lot of class, if you ignore the way she drinks a coke. I think we can solve this case for Blue Moon, what about you? Yeah…that's what I thought too.

Duke Achilles (lighting himself on fire and going down a slide naked while illuminated by spotlights): WHO ARE YOU TALKING TO MENTAT?

Mentat (pretending to absently brush lint from two-dollar unitard): No one sir. Just making the plans, you know, the smugglers and all. THE SMUGGLERS, AIIIIIEEEE (drinks poison tea and rolls up and down a hill while faking convulsions).

In a conceptualized but never filmed scene for the game, Duke Achilles gestures wildly and shouts about "THE FIGHTERS!" while a Guildsman imagines his evil plot.The plot of the game is a hollow mockery of the first book of the Dune chronicles, with House Harkonnen and House Atreides pitted against one another. Westwood has again added their own House Ordos and included a number of fairly neat smaller factions like the Fremen and Sardaukar with whom you can align yourself during the course of the game. Then they ruined all this by taking a big old literary shit on the script of their game and adding in complete nonsense about the Guild making a giant Emperor Worm using some machine while the guildsman cackles madly. The guildsman is unfortunately hairless, making Westwood's desired "mustache twirling" sequence impossible. For continuity reasons they also had to omit their "sandworm in wig tied to railroad tracks" scene.

Game play is straightforward and fun and not at all revolutionary. In fact, the game plays exactly like a prettier version of all of Westwood's previous RTS games with some new units and the setting of Dune. The game is true 3D but the camera movement is somewhat limited. The path finding is passable and the AI ranges from decent to fairly bad. As is the norm in RTS games, the AI is excellent at resource management and production and horrible at recognizing an impenetrable static defense and adapting to it. Playing as the Atreides I would frequently dump a line of heavy vehicles at the entrance to my base and station a repair vehicle or two behind them and not even pay attention to the endless wave attacks that the computer threw at me. On the flip side of the coin the computer would relentlessly pursue my Tiberi-err…spice harvesters, forcing a need for frequent spearhead attacks on the enemy's mobile forces. 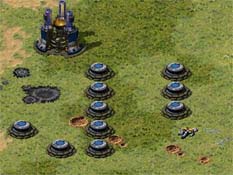 With as much fun as I have poked at the game's cut scenes, I would like to point out that "Emperor: Battle for Dune" still seems to have higher production values and acting on par with the Sci-Fi channel miniseries based on Dune. The Fremen in the game look convincingly like the Fremen from the theatrical movie and the in-game unit detail shows its roots to be similarly with Lynch's film adaptation. I was particularly fond of the tiny Sardaukar infantry who had glowing green faceplates that emit light. The game is entertaining but highly flawed, I recommend it for die-hard Dune and RTS fans only.