The Great American Reach Around - The Midwest & France

Located in the North Western corner of Indiana, only 25 miles from downtown Chicago, is what may be the worst city in the first world. This blighted hellscape is comparable to Prypiat in the Ukriane, only the wilderness is not reclaiming this city the way it is reclaiming that one. Radiation may not kill off trees and deer, but if a river is literally on fire and bubbling with acid then there is not a whole lot of recovering the fish can do.

Using Gary to represent Indiana is as unfair as using Chicago to represent Illinois. Northern Indiana, from Gary all the way across the state to Fort Wayne, is horrible. The radio stations play nothing but Rush Limbaugh and the towns are all interstate stopoffs focused on sucking dollars from passing tourists and travelers. The people are generally nice, but you won't find down home friendly for the most part until you head South. 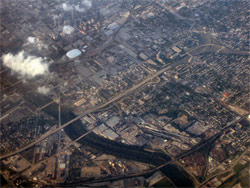 Indianapolis, for all that it's just a giant version of a suburb, is a decent enough place to visit, especially if you like Indiana's second religion of auto racing. Illinois is much the same, with an increasing twang to the voice in either state as you head south. Beyond the cornfields and soybean mega-farms of Indiana and Illinois you will find river communities that are old, historic, and quaint. These are often beautiful small towns along the rivers that are bleeding Applebees and Fashion Bug Pluses where their back end runs into the interstate.

When you travel through areas like that one of the first things you learn is that a few W-stickers on cars and a cowboy hat don't mean you won't be welcome. For most of America the difference between Democrats and Republicans, liberals and conservatives, has been blown totally out of proportion. You might find something to argue with folks about if you go looking for it, but they like the same sort of thing you do, want the same sort of thing you want, and they aren't stringing black people up from trees or playing banjos in the cornfield.

That of course excludes Northern Indiana, like I said, because as friendly as people may be that place is a nest of vipers waiting to bite you.

Finally, before we get to the foreign representatives, let's zip back to Chicago and then head north from there. Into a true oddball of a state that blends the sensibilities of Canada with those of Northern Indiana and offers up scenery that might feel more at home in rural New England.