The Great American Reach Around - The Midwest & France 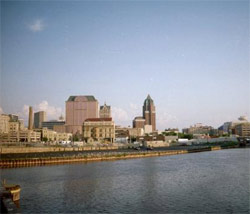 Our final stop on this US tour portion of the Great American Reach Around resides within the state due north of Chicago. Wisconsin is a largely rural state with scenic forested regions and a varied landscape. There is some heavy industry and a hell of a lot of dairy farms. The German influence prevelant in the Midwest is almost palpable in Wisconsin. People of German ancestry make up nearly half of Wisconsin's 5.5 million inhabitants. German-style buildings are not uncommon and don't be surprised if you see a sign that uses an umlaut.

Wisconsin's largest population center is the city of Milwaukee, which is located a scant 90 miles from downtown Chicago. It is essentially the second egg in the metro area omelet. Milwaukee's economy has not adapted as swiftly as Chicago's to changing times, but whereas Chicago endured a brutal realignment from its heavy industrial backbone, industry clings to life in Milwaukee. There is also a lot of beer coming out of the city, much of it actually pretty good.

Milwaukee is also home to two of the (currently) worst professional sports franchises in the United States: the Milwaukee Brewers baseball team and the Milwaukee Bucks basketball team. If you're playing for a bastkeball team with a green deer as its logo then you're probably not going to win the championship.

Today we will end the American portion of our GARA feature with a brief look at Wisconsin's capital and second-largest city.

I hope you've enjoyed this first leg of our big tour of the United States. It has been an epic journey, but it's an epic country. Now it's time to take a look at what our French compatriots have to say about their nation.

Take a deep breath, relax, and get ready to get French as fuck.